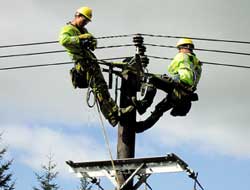 The uk's Advertising Standards Authority (asa) has warned that it will not tolerate companies making grand claims about their green credentials, unless they have science to back them up. The authority has ordered Scottish & Southern Energy to stop using A Good Use of Your Energy, a leaflet it sent out to its gas and electricity customers earlier this year. The leaflet claimed the energy company's tree-planting scheme would absorb co2 equal to that created by households that signed up to its green electricity tariff scheme, Power 2. Around 30,000 of the company's seven million customers are on the scheme, which uses electricity from hydroelectric projects.

The asa ruling comes as companies are increasingly advertising their 'carbon-neutral' credentials, or are claiming to have taken measures to reduce co2 emissions. Many may now have to review proposed adverts. A spokesperson for Scottish & Southern Energy defended the company: "Tree-planting is just part of our green campaign."