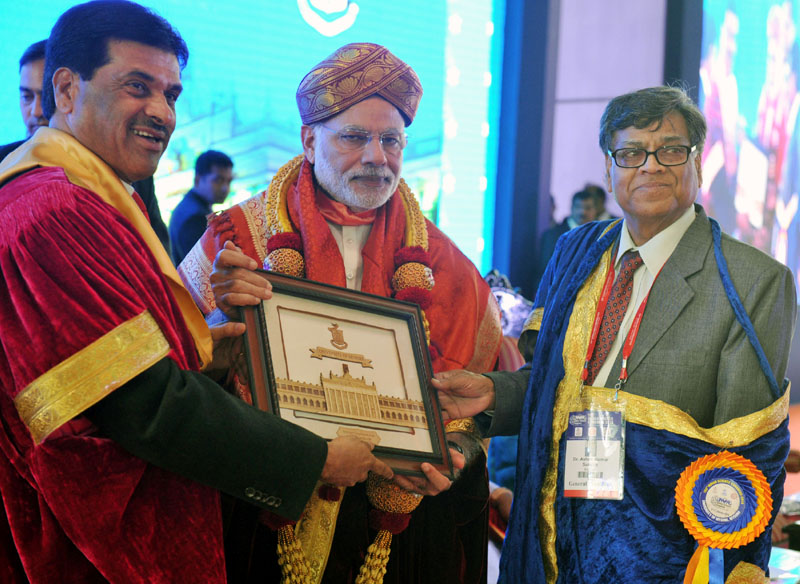 The 103rd Indian Science Congress (ISC) began in Mysuru on Sunday (January 3) with an aim to provide a platform for deliberations on science and technology for indigenous development in India.

“The theme of ISC 2015—Science and Technology for Indigenous Development—is a fitting tribute to A P J Abdul Kalam’s vision of a self-sufficient and self-reliant India,” said Prime Minister Narendra Modi in his address to the Congress.

ISC 2016’s emphasis on “Make in India” stems from the understanding that manufacturing any product or service is impossible unless one knows the science behind it. If the science and technology shaping a product is indigenous, money spent in procuring intellectual rights is saved.

“If we develop our own technology, the final product is more cost-effective,” said Asis Dutta, molecular biology professor at the Jawaharlal Nehru University (JNU) in New Delhi. Take the case of human genome engineering for instance. According to Union Minister of Science and Technology Harsh Vardhan, the field required a funding of at least $100 billion only a decade back. Today, we have come a long way in indigenous research and development on the subject, as a result of which, it requires only a $1000 dollars in investment.

In 1965, Lal Bahadur Shastri advocated “Jai Jawan Jai Kisan”. In 1998, then-prime minister A B Vajpayee took Shastri’s slogan one step further by calling for “Jai Jawan, Jai Kisan and Jai Vigyan”. Recently, Prime Minister Modi called for more investments to “Make in India”. A country cannot prosper if it is not self- sufficient in science and technology, A K Saxena, general secretary of the Indian Science Congress Association, added.

But have our research organisations equipped us to “Make in India” in the nearly 68 years since independence?

“Yes, definitely. Our investment in science and technology over several decades has an excellent foundation, which we can certainly use to ‘Make in India’ and kindle indigenous development,” said K Vijayraghavan, secretary of the Department of Biotechnology (DBT).

Harsh Vardhan also said that we have definitely come a long way. “We now have among the finest scientists, research facilities and technologies in the world,” he said, illustrating how Indian scientists recently developed the ROTA virus vaccine and the Centre of Scientific and Industrial Research (CSIR) developed a new drug for diabetes.

“We are sixth in terms of publication of scientific journals and fifth in nanotechnology. Our country is not really dependent on the West now,” he added.

But there is an increasing demand to increase Gross Expenditure in Research and Development (GERD) to two per cent of the GDP from the current one per cent. The Science Technology and Innovation Policy (STI), 2013, has a goal of positioning India among the top five scientific powers in the world by 2020.

Vijayraghavan said that there has been no cut in government funding on research and development (R&D) and in due course of time, Industry investment on R&D would also increase. "If scientists continue to be encouraged, there is always an opportunity for growth,” Dutta said.

Scientists, professors and delegates from India and elsewhere will be participating in the 5-day event. Major attractions include talks by Nobel laureates John B Gurdon, Dan Shechtman and Bharat Ratna C N R Rao.

“The Prime Minister of India himself being the president of the ISC shows how important science & technology is for the holistic development of the country,” Professor N B Ramachandra, local secretary of the ISC, said.

During the course of the five-day affair, sectional symposia on 14 major scientific streams (agriculture and forestry sciences, environmental sciences, material sciences, chemical sciences and earth system sciences, to name a few) will provide an in-depth understanding of the most recent research available in each subject. Other attractions are ISC’s Women’s Science Congress, a platform for Indian women scientists, and the Children’s Science Congress, which identifies and felicitates young achievers with scientific inclinations.

From its modest beginnings in 1914, the Indian Science Congress has bloomed into an extravagant affair, as the ISCA reached its present strength of nearly 40,000 members. Nearly 105 scientists presented 35 papers in five streams (botany, physics, chemistry, geology and ethnography) in the first ISC, held in Kolkata between January 15 and 17, 1914.