Just a decade ago, 4G, the fourth generation wireless network, shook up the world speeding up data transfer and ensuring superior and uninterrupted mobile and internet connectivity. Now, the world is gearing up for 50 times faster 5G that will make wireless digital communication near seamless. The US and South Korea have already rolled out the network on a trial basis. In May 2018, five Nordic countries—Sweden, Norway, Denmark, Finland and Iceland—announced their plan to create the world’s first interconnected 5G region. India, which lagged in the implementation of earlier networks, has set up a high level forum to esta blish the vision for 5G in the country and plans to begin trials by 2020. The euphoria around 5G is for a reason.

A host of industries have been waiting for the arrival of 5G for quite some time now. Development of artificial intelligence (AI)-based tech nologies and Internet of Things (which includes smart wearables and virtual reality headsets) has been slow due to lack of superfast data transfer. One example is autonomous vehicles. Automakers have already developed driverless smart cars. They can become usable only if they communicate with other cars and traffic signals. This requires superfast data transfer with minimal delay (a latency as low as 1 millisecond). 5G is being architected to support all such low-latency appli cations, including industrial robots to remote surgery. 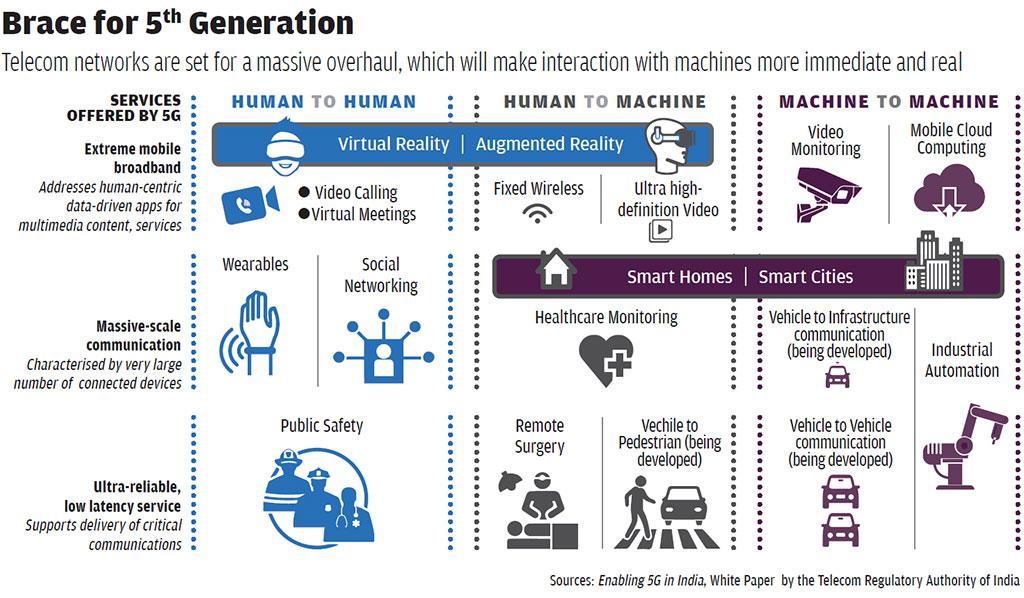 The new technology “will move us closer to everything, everywhere and at all times, and enable inter-working of different technologies and networks,” says Rita Rinaldo, head of institutional projects, European Space Agency. “Integration of satellites in 5G netw orks will allow for new applications in domains such as agriculture, health and emergency response for commu nities living in rural areas,” she says.

But the prospects will come at a price, at least that’s the fear of several health experts across the world who say 5G will open up Pandora’s box of troubles for health and environment.

More than fear of the unknown

In 2011, WHO’S International Agency for Research on Cancer (IARC) reviewed several studies that detailed the effects of a wide range of RF-EMF radiations (from 30 kilohertz to 300 gigahertz) on humans as well as rats, and concluded that the radiations are “possibly carcinogenic to humans”.

In 2018, a peer reviewed report published by the National Toxicology Program (NTP) of the US National Institute of Environmental Health Sciences found RF-EMF of 900 mega hertz, used by 3G and 4G networks, led to incidences of malignant heart schwannomas (cancer that attacks nerve tissues) in male and female rats. The report also found evidence that the radiation caused glioma (malignant tumour in the brain) in the rats.

That year, Cesare Maltoni Cancer Research Centre of the Ramazzini Institute in Italy published a 13-year-long study that evaluated the impact of 1.8 GHz RF-EMF radiation on the incidence of heart schwannomas and glioma in 2,448 rats. It found an incre ased incidence of the diseases in them.

5G requires RF-EMF radiation between 600 MHz and 86 GHz, which fall well within the range analysed by all the three studies.

Cancer is not the only disease that such radiation can cause. Scientists have so far linked 5G to at least 20 ailments, including heart diseases, type-2 diabetes and mental disturba nces such as depression, anxiety and suicidal tendencies.

“All artificial electromagnetic radiations are bad because our biological systems are not adapted to it. They disrupt metabolism,” says Paul Heroux, professor of toxicology and health effects of electromagnetism at the McGill University Health Center in Canada. “The evidence has been there, but ignored for decades. 5G will promote cell phone use, and therefore human exposures from phones and base stations. The higher frequencies will concentrate the radiation in a smaller portion of the human body,” he says, adding that children are particularly vulnerable to its effects. Higher frequencies of 5G will also penetrate much deeper into the human body because of a phenomenon called beam-forming unique to the technology which brings together electromagnetic signals from multiple antennas to create signals with greater intensity and better reach.

To raise the concerns, on March 5, 230 health experts and scientists from 40 countries demanded the Nordic countries to put a hold on 5G till the “potential hazards of acute and long-time health effects of exposure to 5G have been fully investigated by industry-independent scientists”. Earlier in September 2017, as many as 180 researchers from 36 countries, including India, urged the EU to set up an independent task force to assess the impact of 5G on human health. In 2015, US scientists made an appeal to the UN secretary general, WHO and all UN member nations to deploy 5G only after assessing its health impacts.

But these appeals seem to have fallen on deaf ears. On March 19, Europe’s largest economy Germany began auctions of 5G bandwidth spectrum in Bonn. North American region alone is set to launch 20,000 5G satellites. The industry is not willing to accept the harmful impacts of 5G. The International Commission on Non-Ionizing Radiation Protection, a Germany-based non-profit which determines the exposure limits of electromagnetic fields in devices, contends that there are no major threats to human health due to high frequency radio waves. “It is not yet known that radiations can cause adverse health effects, as the physics of non-ionizing radiation cannot explain this,” says Abhay Karandikar, director, IIT-Kanpur and part-time member of Telecom Regulatory Authority of India.

As the jury is out on the safety of 5G, some scientists suggest designing networks based on less harmful fibre optic cables. “These can be 20,000,000 times faster than 5G,” says Heroux. “We should capitalise on wired connections which can bring speed of 10 Gb (gigabytes) per second. Most importantly, we should recognise mobile phones for what they are: a radiating device. They should be redesigned to minimise user exposures and use them sparingly,” he adds.

Here are three interviews on the subject