Brace for the next big revolution

Big data and algorithms are set to take over the world 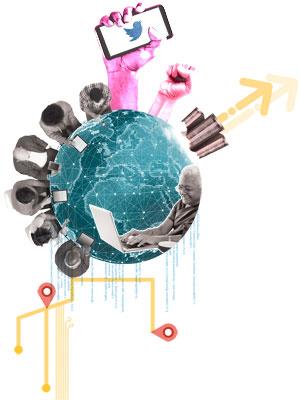 ABOUT 20 years ago, Kevin Kelly, founding editor of Wired, had told me during an electronic conversation that the “future of [information] technology is biology”. His reasoning was that our biological system is an extremely complex network and yet, like a sophisticated information technology (IT) infrastructure, it allows smooth func tioning of the body, mind and soul. If we understand how data flows through our nervous system, we may be able to take information technology to that level of complexity and make it work for the efficient existence of humans on the earth.

People were already introduced to the Internet by then but were using it in a limited way. Of course, scientists and innovators could foresee its scope and potential, which is why the Internet is like it is today.

Over the past two-and-a-half decades, we have seen information technology evolve and become an integral part of our personal, social and professional lives. Today, can you imagine your life without the Internet? You would panic and feel helpless if the Internet connection drops out even for 20 minutes at the workplace; it’s as if no work can be done offline. From home to workplace to market, a large population is constantly being connected. We book cabs on mobile phones, navigate through maps on our smartwatch, use a fitness band to keep a tab on our calorie intake, order food online and send instant text messages. In the next quarter of a century, I see the entire world coming online and the Internet transforming into a basic necessity—as basic as air, water and shelter—and large data sets, or big data, becoming the lifeline of service providers.

In Circa 2017, it has already been established that anybody who is connected to the Internet is nothing but data. What a person likes or dislikes, his or her tendency to share or post, online behaviour, Internet usage patterns, online shopping patterns, time spent on a type of article or even the kind of interaction with certain people—all contribute to how the Internet and appli cations available online target the person.

Recently, I was discussing with Ulises Mejias, professor of communication studi es and integrated media at the State Uni versity of New York at Oswego, the need for the masses to understand the meaning of data and its importance in their daily lives, when he talked about data literacy and algorithm literacy. He showed me the ima ge of an aircraft with passengers seated on it, each marked with the price he/she paid for the seat. From the image, it was clear that each passenger had paid a different price for the aircraft, even if the difference was by only a few dollars. The passengers were charged different prices based on the algorithm created while they were trying to book the tickets. The system had not only collected data pertaining to how long had the person spent on the website before making the final booking but also analysed the potential flyer’s profile, paying capacity, past habits of booking tickets and openness to flexibility in travel dates.

In a connected world, everyone who is accessing information is leaving a trail of data. This big data helps analyse computa tionally to reveal patterns, trends and asso ciations, especially relating to human beha viour and interactions. The computer does the analysis through algorithm, which is a process or set of rules followed in calcu lations and problem-solving operations.

An algorithm is extremely helpful but it can also be highly biased. For example, I want to search for "Muslim rulers of India". As soon as I type the first word in Google Search, it shows me auto complete search predictions for phrases like "Muslims are terrorists", "Muslims are minority" and "Muslims are religious". These results are based on the kind of phrases people frequently look for on the search engine alongside the word "Muslim".

British television series Black Mirror shows a futuristic world where technology is so integrated into our lives that it is difficult to imagine one without it. In one particular episode, people rate their intera ctions with others around them via an app, integrated with all contemporary social media platforms. These ratings collected over the course of the day affect one’s life so much that if the rating drops, the person is treated socially unacceptable and can be fired from the job or forced to pay higher interest rate on loans. This is an episode from a scifi show. However, a similar system may soon become a reality in China.

According to reports from last year, the Chinese government plans to implement a rating system, which connects the financial, social, political and legal credit ratings of the citizens to give one “social trustability score”. It’s something like the Cibil score we have in India, but encompasses all aspects of your life. So, a person with a low rating could lose his/her social security or even fail to get a seat in an overnight train!

But being connected with each other has its advantages too. For instance, the mayor of the Spanish town of Jun, Rodriguez Salas, has been pushing all the 3,500 citizens to go on Twitter for accessing all kinds of services and information in a transparent and accountable manner. From booking a doctor’s appointment and complaining about a faulty street light to filing a police complaint and seeking a response from the authorities, everything in the town is being carried out on Twitter.

A report by California-based big data software company Hortonworks says 59 per cent of businesses already consider data and analytics “vital” to the running of their organisations; another 29 per cent deem it “very important". Some 60 per cent of busi nesses claim that their data generates reve nue within their organisations, while 83 per cent say data makes their existing services and products more profitable. This is how much data matters to businesses and service providers in 2017 when 3.5 billion of the 7 billion people worldwide are online. Now imagine a scenario after 25 years when everyone is connected to everyone else.

It can ensure a transparent and accoun table centralised/localised governance throughout the world, where all the services and information would be available to all at the touch of a who-knows-what-techno logy-will-be-available 25 years later!

But one thing is for sure that access to the Internet, which was once a luxury, would become a necessity. Bitcoins might just be universally accepted currencies for all transactions. Transferring and storing audio, video or text files might not require any physical device. All personal and government data might be available on cloud servers.

Even now, with only 50 per cent of the world population online, information related to a majority of the population is already available on the Internet. Citizens, businesses and governments are putting up more and more information online. When the whole world would be connected, every piece of information and communication would be in real-time, and virtual commu nications would dominate personal and professional communications.

Already, 2.5 quintillion bytes of data is being created every single day. About 90 per cent of the data available in the world has been created in the past two years alone, states an IBM report. Now fast-forward to 2042. I can’t even do the math to quantify the amount of information that will be available online for all of us to consume, process and analyse. However, one must understand that the value of data lies not in its amount but how it is utilised—for the benefit of others.

There is no denying that big data has its own set of challenges, especially those related to security and privacy. But it’s something that can provide a great deal of means to govern people. And at the same time, it will empower people to influence their immediate system.

Imagine a society where 90 per cent of the country's population, which is still offline, gets connected to the Internet. Will we still need traditional schools and teaching methods? Will it change the current form of democracy if all the citizens and governing members are online? Will the centuries-old patriarchal system transform if all the country's women join the online population? If data from all localities is available on a cloud server, will our communities have localised data centres? In that case, can you imagine how rich the Internet would become?

With the entire population online, big data would be the backbone of all decision-making processes. There would be univer sal data production and consumption, facilitating the algorithm to decide every action of our life on-the-go in real-time.

Osama Manzar is the founder-director of Digital Empowerment Foundation (DEF); chair of Manthan and mBillionth awards; and member, advisory board, of the Alliance for Affordable Internet. He has co-authored NetCh@kra: 15 Years of Internet in India and Internet Economy of India. Udita Chaturvedi, media officer with DEF, also contributed to the article.