Cold comfort: The sun is cooling; doesn't mean there'll be no global warming

The sun is going through a period of decreased activity known as the modern grand solar minimum. The last time such an event occurred led to the Little Ice Age

A new 11-year-cycle of the Sun has begun. Scientists believe the Sun was at its weakest in 2019 in the last 100 years or so — known as the solar minimum — and 2020 marks the beginning of the 25th cycle. But the odd thing is that solar activity, measured by the number of Sun spots at any given time, is pretty low even in 2020.

Sun spots are areas of strong magnetic forces on the surface of the Sun — sometimes as large as planets — that appear as darker spots because they are cooler.

The Sun had no Sun spots for around 71 per cent in 2020 through September 21, 2020, compared to 77 per cent in 2019, according to the United States National Oceanic and Atmospheric Administration’s (NOAA) Space Environment Centre. In May this year, it was as high as 78 per cent, sparking fears of a Little Ice Age.

Scientists say the Sun may be going through a long period of decreased activity known as the Modern Grand Solar Minimum from 2020 to 2053. The last time such an event occurred was during the Maunder Minimum — from 1645 AD to 1710 AD, which was part of what is now known as the Little Ice Age — when Earth went through a series of elongated cold periods during the medieval centuries.

The alarm went off when a study predicted that the surface temperatures on Earth will go down noticeably during the Modern Grand Solar Minimum due to a 70 per cent reduction in solar magnetic activity.

The research paper, by Valentina Zarkhova of Northumbria University, the UK, was published in Temperature on August 4, 2020. To arrive at her conclusion, Zarkhova studied the complex magnetic activity in the interior of the Sun and how this impacts its total energy output measured as solar irradiance.

Variations in solar irradiance lead to heating of the upper layer of the Earth’s atmosphere and influences the transport of solar energy towards the planet’s surface.

Zarkhova studied the magnetic activity through the solar background magnetic field which occurs in the form of two magnetic waves inside the Sun.

When Zarkhova combined these two waves for solar cycles 21-26, she found that the Sun’s magnitude is going down in cycles 24-25 and becoming almost zero in cycle 26. She also found multiple grand solar minima events, including the current event from 2020-2053. 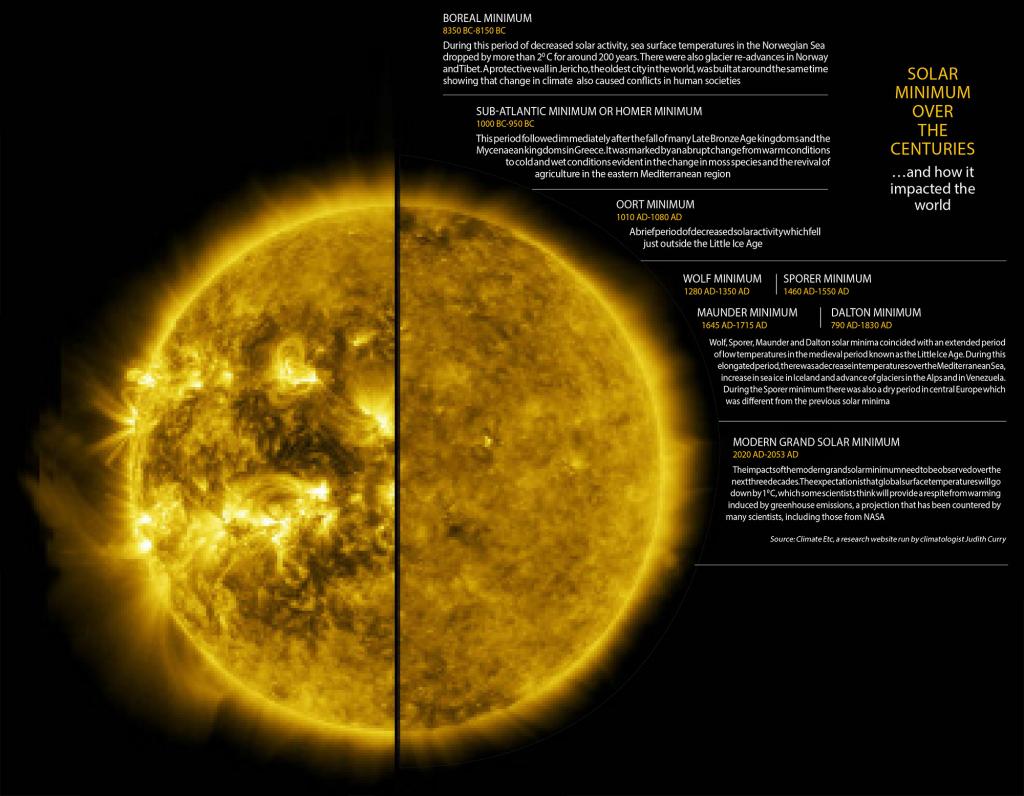 During the Maunder Minimum in the middle ages, the solar irradiance went down by 0.22 per cent or 3 watt per square metre (W/sqm) in 1710 AD when the period ended.

This brought down the temperatures in the Northern Hemisphere, especially in Europe, by 1-1.5 degree Celsius and led to frozen rivers, long cold winters and cold summers. This happened because of the complex impacts of decreased solar activity on the abundance of ozone in the Earth’s atmosphere and on climatic cycles such as the North Atlantic Oscillation (NAO).

There is another reason for the cooling, directly related to the sun’s magnetic field, which shields the Earth from harmful cosmic and galactic rays. In the absence of the shielding more rays reaching the Earth and forming high clouds in the atmosphere, it is leading to the cooling, according to Zarkhova.

She predicted that the planet’s temperature might plummet by 1°C during the current grand solar minimum. The possible decrease in temperatures has led to people, even some scientists, to predict that the solar minimum cooling might cause a Little Ice Age and offset the rising temperatures due to global warming.

But the National Aeronautics and Space Administration (NASA) is not very sure about such a conclusion. In February 2020, it released a statement that dispelled the fact that there would be any major effect on global temperature rise due to greenhouse gas emissions due to human activities.

It said even during a Grand Solar Minimum, the decrease in climate forcing would only be worth as much as three years of carbon dioxide growth in the atmosphere. NASA also said the impact of global warming would be six times greater than the cooling caused by the Grand Solar Minimum, and that even if the period lasted for a century, the planet would continue to warm.

The sun’s activity is not completely understood. Scientists takes six months to a year to just decide upon what exactly is happening in the Sun from observations.

For instance, on May 29, a NASA spacecraft observed a family of sunspots that were associated with the biggest solar flare since October 2017. A solar flare is a burst of activity on the sun’s surface accompanied by an ejection of particles known as the coronal mass ejection.

When the flares are big enough — usually when the sun’s activity is at its maximum or solar maximum — they can disrupt satellite communications and many other technological equipments in and around Earth.

The solar flare observed by NASA is not big enough to be dangerous, but it could signal the beginning of the 25th solar cycle. But scientists can only be sure about this in hindsight, after observations have been made for at least six months to one year.

Meanwhile, there is raging debate about the exact nature of sunspots and if they should be used as a proxy to measure sun’s activity.

At a meeting of solar scientists at the National Centre for Atmospheric Research in Boulder, Colorado, usa, in 2019, Scott McIntosh of Host Institute said: “Sunspots, and the cycle itself, are just symptoms of a still-mysterious story playing out inside the sun.

Lika Guhathakurta of NASA agreed: “Using sunspots — a side effect, and not a cause — to predict the sun’s future behaviour is like trying to divine the germ theory of disease by looking at a runny nose.”

In fact, the scientists had gathered at that meeting to precisely predict the next solar maximum with the help of 60 prediction models. The meeting was important as governments and private companies would need to be informed to shield their equipments and installations from deadly solar flares.

The newest models among these resemble modern climate prediction models using physics-based simulations of the Sun to predict how it will evolve and how it will impact solar activity.

Even with state-of-the-art models and top scientists reviewing them, the only conclusion that could be drawn was that Sun will attain a peak sunspot range of 95-130, and that this will happen sometime between 2023 and 2026, during the 25th cycle.