Gravitational waves detection: Will this signal a new era in understanding the universe?

Detection of gravitational waves can explain why there was a sudden enlargement of the universe, called inflation, in the wee hours of the Big Bang

LIGO has two identical detectors: one in Livingston and other in Hanford, Washington, USA. This is the Livingston site detector with the central building joining two 4 kilometer arms.

Hundred years after Albert Einstein’s prediction of the presence of gravitational waves in his Theory of Relativity, a team of scientists from 15 countries led by David Reitze, LIGO laboratory executive director, announced their detection on Thursday, taking the world of physics to new exciting heights.

Working hard for over 30 years and surviving false alarms (such as the one in 2014 when scientists had announced it wrongly only to be later disproved), the 900-strong international team of researchers, including Indian scientists from the Inter-University Centre for Astronomy and Astrophysics and the Chennai Mathematical Institute, has confirmed the detection of gravitational waves by the twin Laser Interferometer Gravitational-Wave Observatory (LIGO) detectors located in Livingston, Louisiana, and Hanford, Washington.

The waves are extremely tiny, just millionth of an atom in size, but they open up before us exciting possibilities in the realm of space science and the Big Bang theory.

“It is one of the international projects with (the) biggest contingent of Indian scientists from nine labs and research institutions. More than 59 people are involved (in this project) with about 35 having direct involvement in this path-breaking detection event. The level of Indian participation shows the confidence we have gained in the international arena,” TV Venkateswaran, scientist with Vigyan Prasar, told Down To Earth via email from Pune.

In 1915, Einstein fundamentally changed the way we understand the universe as he proposed in the general Theory of Relativity. He postulated that matter and time were inextricably linked, and that matter warps the space-time fabric and bends energy passing through it. Matter, energy and gravity are all mediated through the four-dimensional space-time structure of the universe in which interactions between them are limited by the speed of light. Einstein’s theory shook the scientific community as it challenged and eventually uprooted Newton’s understanding in which gravity was seen as an instantaneous force of attraction across space.

This implied the inevitability of the existence of gravitational waves—tiny ripples in the fabric of space-time. Over the years, all the phenomena predicted by the Theory of Relativity, with the exception of these gravitational waves, have been experimentally verified. Gravity is such a weak force and the ripples so small that it has eluded detection for several decades till now.

According to Venkateswaran, Einstein himself was convinced that the inability to distinguish a region with a gravitational field from one that is accelerating holds true for all physical measurements. No experiment, no clever exploitation of the laws of physics, the great scientist had once claimed, can tell us whether we are floating in free space or in a freefall in a gravitational field. 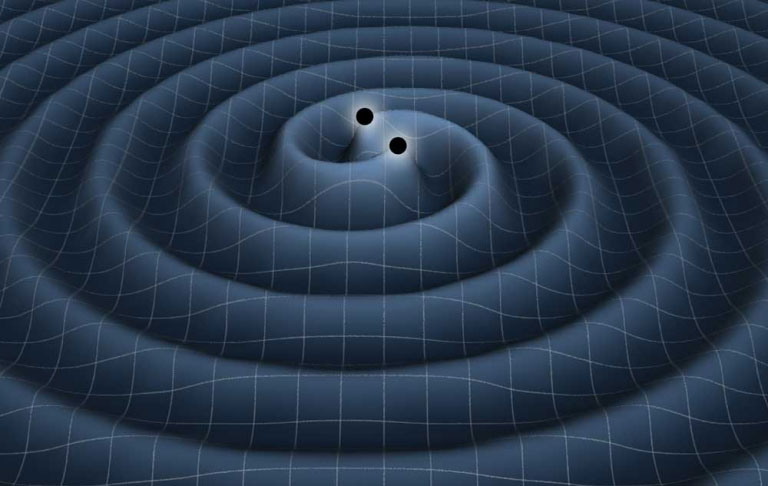 Gravitational waves are of orders so small that it would take a truly cataclysmic event such as the collision of blackholes or neutron stars or indeed the formation of the universe itself, for detectable waves to be generated. So far, gravitational waves have been inferred through the behaviour of orbits of twinned neutron stars, supermassive stars that have collapsed and are spinning around each other.  Contractions in their orbits, in accordance with a loss of energy predicted by gravitational waves has been observed. However, there have been no direct observations.

To understand how gravitational waves work, consider a tiny pebble dropped in a still lake. The act would certainly cause ripples to form that would move towards the other end, but these would be too small to detect. However, if one throws a big enough rock, the resulting waves may just be detectable at the other end of the lake. When an object accelerates through space, Einstein found that it produces a gravitational field. Einstein predicted that when gravitational fields of two bodies interact with each other, in a gravitational event, waves are formed. An asymmetric gravitational system, like the moon and earth orbiting each other, also produces gravitational waves but are infinitesimally small. Even when massive or supermassive bodies disturb the space-time creating ripples, they are incredibly faint which make them hard to detect and measure.

Since then scientists have been working relentlessly to detect the mysterious gravitational waves. The advanced LIGO detectors based in the US are “L”-shaped tunnels with four kilometre long arms perpendicular to each other. Powerful lasers are made to reflect back and forth in these L-shaped vacuum tunnels. Interference is used to measure the difference between the length of both the arms with the accuracy of around 10-20 metres, an error margin 10 billion times shorter than the atomic radius.

“The arrangement of the hands have been made such that under no disturbance, the lasers would have destructively interfered with each other, or would not have produced any visible light at the end of the course. But the mirrors used to bounce back the lasers were disturbed by a magnitude of 10-18 by the gravitational waves from colliding blackholes in the universe and produced a constructive interference which provides actual detection and measurement of the gravitational waves,” said R Rangarajan, a professor at the Physical Research Laboratory, Ahmedabad.

The detection made at LIGO was of gravitational waves produced by two black holes that merged after spiralling towards each other about 1.5 billion years ago.

It is not possible to detect/read echoes or ripples formed during the Big Bang as speculated by the BICEP with LIGO. “LIGO’s job is to look for the splashes, ripples from violent events,” Geraint Lewis, professor of astrophysics at the University of Sydney, said. 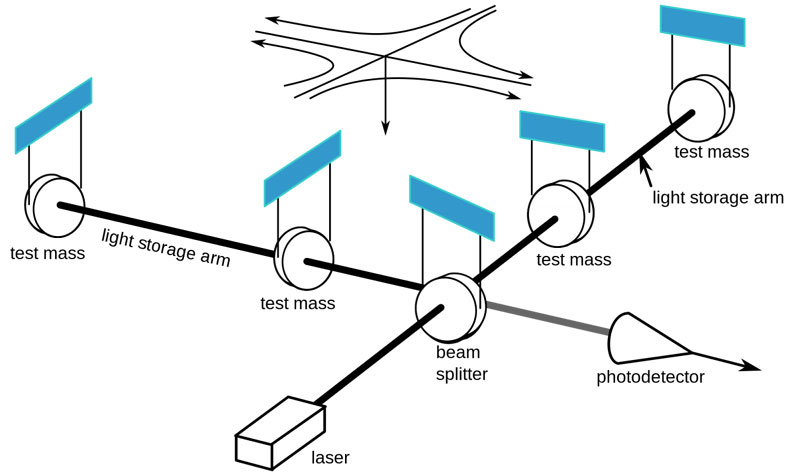 Physicists estimate that by the time gravitational waves reach the Earth, the wavelength will be of the order of a billionth the diameter of an atom. The earlier detectors were not that sensitive. It is no wonder that the first LIGO observational campaign, which ended in 2010, was a fiasco. The advanced LIGO can detect wavelengths of the order of 10-20 metres.

The earlier version of LIGO was constructed in 1999. It tried in vain to detect gravitational waves with reasonable certainty for almost 11 years. After having failed, scientists decided to upgrade the instrument sensitivity by 10 times. The advanced LIGO went into operation in September 2013.

With only two detectors in operation, the precise location of the cosmic event that generated gravitational waves is not easy to detect through traingulation. It is here that the proposed Indian LIGO (IndiGO) plays a crucial role. A lot of researchers from across several institutes in India are involved in the initiative. IndiGO will have a similar design and instruments matching the two LIGO observatories.

“The detection of gravitational waves opens up a whole new way of studying the universe, allowing scientists to infer the processes at work that produced the waves,” Venkateswaran added.

So, how is the study of gravitational waves important? According to experts, they can explain why there was a sudden enlargement of the universe, called inflation, in the wee hours of the Big Bang.

According to Lewis, “Telescopes have been able to observe the universe in (an) optical light, as well as X-rays and radio waves. But gravitational waves reveal a different side of the universe; ultraviolet events revealed by their shaping of space and time themselves. We will truly see a different universe.”

However, as gravity and quantum mechanics do not work well together, so we do not really understand the particle nature of gravity, he said.

When asked whether scientists will succeed this time, Lewis added, “Science embraces failure. Science understands risk, and the LIGO team, I am sure, have worked long and hard to make this result as robust as possible… if there is a result, I am sure if will be very believable.”

So, are we close to a unified theory of matter? “I’d like to think we’re a step closer, but we don’t know how far away the destination really is. Maybe a small step?” he said.

The detection could lead to the opening up of an entirely new discipline of science—gravitational astronomy that would depend purely on gravitational waves. Scientists are eager at the prospects of such a development as it open up a new side of the universe, one that is yet unexplored.

According to IUCAA Professor Emeritus Sanjeev V Dhurandhar, “Our current knowledge of the universe is almost entirely obtained from electromagnetic waves. Electromagnetic waves are easily scattered or absorbed. On the other hand, gravitational waves are weakly interacting and are not easily scattered and so would give high fidelity information. This difference in their properties implies that we would be able to obtain knowledge which was hitherto not available to us.”

According to Venkateswaran, “The detection only tells us that there are waves. We now have to prepare ourselves with the astronomy tools that will show us what happens in a storm. Every new age of development also has its own spin-offs. Let us look forward to what wonders this one brings.” 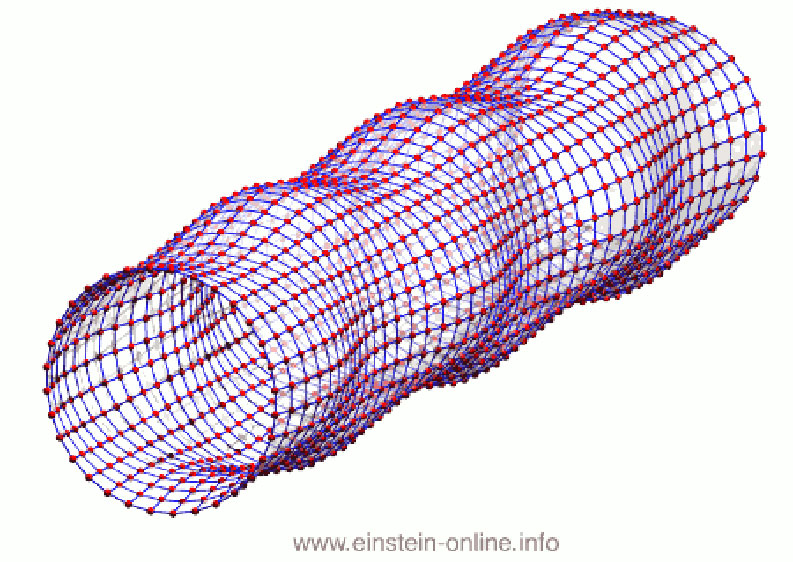