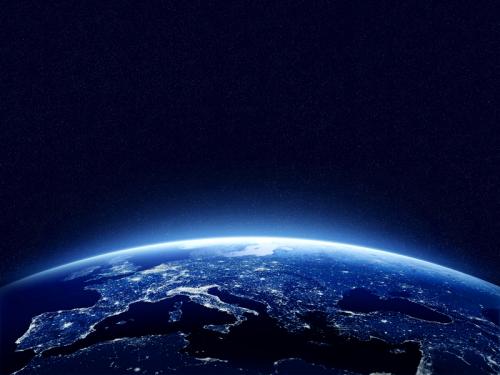 Looking deep into outer space begs an obvious question. Are we alone? Does intelligent life exist elsewhere? It is a question that has preoccupied mankind ever since we became capable of rational thought. But space exploration could also hold clues to questions that have only struck us in recent decades, with the gradual awareness that carbon dioxide emissions are changing our own planet’s climate. A situation that, if unabated, could lead to an “extinction level” event.

This awareness coincided with the discovery of the first planet – or “exoplanet” – outside our own solar system. And we have now discovered thousands more.

Such exoplanets are incredibly diverse, but as many as two billion of them, within our galaxy, may be similar in size to Earth, and orbiting a star similar to our sun. The study of these exoplanets has moved from an era of simple detection to one of detailed characterisation. For some, we even have information about their atmospheric temperatures, compositions, cloudiness and wind speeds.

For now, these techniques are constrained to a sub-class of exoplanets termed “hot Jupiters”, large, Jupiter-sized planets, orbiting very close to their parent stars. Combining these observations with adapted Earth climate models has begun to provide information on subjects including the planets’ unexpected size, and the varying efficiency of how their atmospheric winds redistribute heat.

Fascinating as these puzzles are, however, the natural focus for me is to look towards smaller, more Earth-like planets. I have always been interested in combining the study of exoplanet climatology with that of Earth climate science, which draws me back to the question of life on another world.

To keep things simple, we define a planet as being potentially life-harbouring in a very simple, Earth-centric way. Does it have a temperature range where liquid water, so fundamental to life here on Earth, could exist? This defines the “habitable zone”, a region around a star where the light received by the planet is neither so strong that it leads to total evaporation, nor so weak that it would lead to freezing of any water.

Of course, the details of how much water might be present and the actual planetary temperatures for a given amount of starlight are complex. We know in our own Solar system that the Earth, Venus and Mars are not extremely dissimilar in size, or in the amount of light they receive from the sun.

However, Venus is completely desiccated and very hot, whereas the water content of Mars is believed to be frozen at the poles.

Additionally, the earliest evidence of life on Earth dates from about three billion years ago, during the Archean period. During this time, the sun was much smaller and fainter than it is today, as sun-like stars expand over time.

The sun will continue to expand, and in a few billion years this is likely to lead to the total evaporation of the water from Earth. So if we are to predict whether complex life might be present on an exoplanet, we must understand the reasons why Venus, Earth and Mars diverged in their evolution, how the Earth stayed “habitable” during the evolution of life, and when it might become uninhabitable.

We know that our atmosphere is not in chemical balance, largely due to chemical emissions from life forms. Potentially, by measuring the balance of the gases in the atmospheres of Earth-like exoplanets, just as we are currently doing for hot Jupiters, we may find a similar imbalance – and a potential signature of extra-terrestrial life.

A potentially habitable Earth-like planet has been detected around the sun’s nearest neighbour, a cool, small star called Proxima Centauri. But we don’t yet really understand how its climate will differ from Earth’s given that it is exposed to the radiation from such a cool star. It also seems that photosynthesis, critical to life on Earth, is not likely to work there.

And all of this brings us straight back down to Earth. Currently, despite the fact that a vast number of potentially habitable Earth-like planets exist in our galaxy we know of life existing in only one place: right here.

We now need to to understand in more detail the multitude of various climates that planets can support, and how they evolve over time and with changing conditions.

One of the biggest challenges facing us on our own planet is the increase in atmospheric carbon dioxide, causing an increase in the variability of our weather systems. As our climate evolves and changes, we must adapt. And this adaptation can only be aided by the lessons learned from forcing our theories, tools and brains to cope with the diversity of climates presented by the exoplanets.