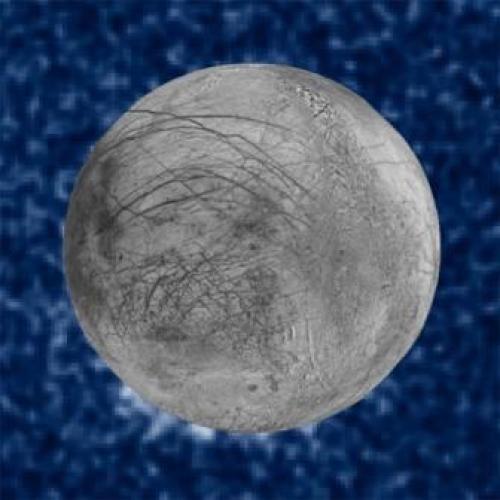 Using NASA’s Hubble Space Telescope, astronomers have imaged what may be water vapour plumes erupting off the surface of Jupiter’s moon Europa.

The observation increases the possibility that missions to Europa may be able to sample Europa’s ocean without having to drill through miles of ice.

“Europa’s ocean is considered to be one of the most promising places that could potentially harbour life in the solar system,” said Geoff Yoder, acting associate administrator for NASA’s Science Mission Directorate in Washington. “These plumes, if they do indeed exist, may provide another way to sample Europa’s subsurface.”

The plumes are estimated to rise about 200 kilometres before, presumably, raining material back down onto Europa's surface. Europa has a huge global ocean containing twice as much water as Earth’s oceans, but it is protected by a layer of extremely cold and hard ice of unknown thickness.

The team, led by William Sparks of the Space Telescope Science Institute (STScI) in Baltimore observed these finger-like projections while viewing Europa’s limb as the moon passed in front of Jupiter.

The original goal of the team’s observing proposal was to determine whether Europa has a thin, extended atmosphere, or exosphere. Using the same observing method that detects atmospheres around planets orbiting other stars, the team realised if there was water vapor venting from Europa’s surface, this observation would be an excellent way to see it.

In 10 separate occurrences spanning 15 months, the team observed Europa passing in front of Jupiter. They saw what could be plumes erupting on three of these occasions.

This work provides supporting evidence for water plumes on Europa. In 2012, a team led by Lorenz Roth of the Southwest Research Institute in San Antonio, detected evidence of water vapour erupting from the frigid south polar region of Europa and reaching more than 160 kilometres into space. Although both teams used Hubble's Space Telescope Imaging Spectrograph instrument, each used a totally independent method to arrive at the same conclusion.

“When we calculate in a completely different way the amount of material that would be needed to create these absorption features, it’s pretty similar to what Roth and his team found,” Sparks said.

If confirmed, Europa would be the second moon in the solar system known to have water vapour plumes. In 2005, NASA’s Cassini orbiter detected jets of water vapour and dust spewing off the surface of Saturn’s moon Enceladus.