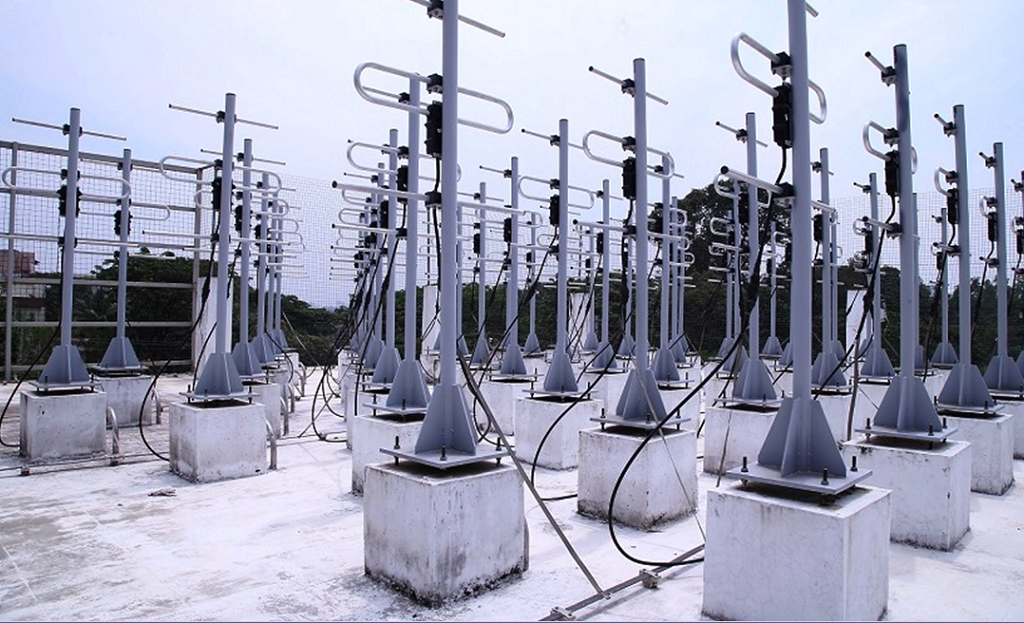 Radars detect objects from a distance by sending radio waves at objects and capturing their reflections. Credit: Author

A fully indigenously built radar to scan high skies over the Indian ocean for movement of air and monsoon winds has started functioning at the Cochin University of Science and Technology in Cochin.

The radar designed and fabricated in India adds to the already available radars and Sonars to keep a close watch on the way winds move in the upper atmosphere. Situated in a strategic place where the monsoon makes first entry into the subcontinent, the new radar will add to further the precision of weather, especially the monsoon, in India.

The radar is specifically designed to scan the stratosphere which is the upper skies. “Troposphere is the lowest layer of the atmosphere where we live and this extends upto 17 km. In this region, temperature decreases with height. All weather systems such as clouds, rain, thunderstorms, depressions, cyclones occur in this lower part of the atmosphere. On the other hand, stratosphere is the region above 17 km, where the atmosphere is quite calm. Weather systems are quite absent in this region. It is always dry, and is radiatively sensitive region,” explained K Mohan Kumar, Director, Advanced Centre for Atmospheric Radar Research, CUSAT, while speaking to India Science Wire.

During the monsoon season, strong winds known as ‘Low Level Monsoon Jetstream’ appear around the Southern part of India. “This happens at about 1.5 km above from the ground. Similarly around 14 km altitude, very near to the stratosphere, another strong jetstream comes from the East with a speed of 40-50 meters per second. The speed as well as the north-south movement of these two jetstreams controls the distribution of rainfall over the Indian region. Our radar is the most suitable facility to measure the horizontal and vertical winds from an altitude from 315 m to height of 20 km with good accuracy and high resolution,” said Kumar said.

The CUSAT ST-radar scans the sky horizontally and vertically in small steps of 1 degree thus getting a three dimensional picture of the atmosphere. It is like a cone of 30 degrees moving across the skies. While scanning it throws a pulse of radiowaves of 200 to 205 MHz frequency at the atmosphere and waits for it to bounce back. However, the turbulence in air and humidity change the direction of some of the waves. Thus the returning waves are different from those shot at the atmosphere. The scan produces a spectrum of densities of air, from which it is possible to compute the actual winds. This gives scientists a pretty clear picture of what is going on there.

Scientists said the results from the radar are quite accurate. “By comparing Radiosonde Balloon observations at the same location for more than two years, we have seen that the ST Radar observations are highly accurate with 99 per cent similarity,” said Kumar.

The radar facility has applications other than tracking monsoon and is attracting attention of researchers from all over. The European Space Agency had contacted for ST radar data for the validation of its new satellite to be launched next month. Similarly, the UK Met Office and University of Reading in England have proposed a joint research programme. An Indo-French programme to utilise the ST radar observations is in progress to study troposphere-stratosphere interactions.