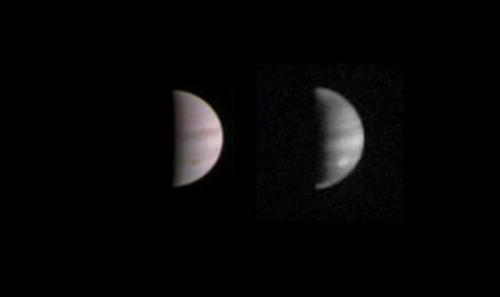 The Juno spacecraft sent by NASA to study the largest planet in our solar system will get closer to the cloud tops of Jupiter than at any other time during its mission on Saturday at 5:51 am (8:51 am Eastern Daylight Time and 12:51 Coordinated Universal Time).

At the moment of the closest approach, Juno will be about 4,200 kilometres above Jupiter’s clouds and travelling at 208,000 kilometres per hour with respect to the planet.

There are 35 more close flybys of Jupiter scheduled during its prime mission which will end in February 2018.

The Saturday flyby will be the first time Juno will have its entire suite of instruments activated to look at the giant planet.

“This is the first time we will be close to Jupiter since we entered orbit on July 4,” Scott Bolton, the principal investigator of Juno from the Southwest Research Institute in San Antonio, says.

“This is our first opportunity to really take a close-up look at the king of our solar system and begin to figure out how he works.”

“No other spacecraft has ever orbited Jupiter this closely, or over the poles in this fashion,” Steve Levin, the Juno project scientist from NASA’s Jet Propulsion Laboratory in Pasadena, California, says.

The spacecraft’s visible light imager, JunoCam, will snap close ups of the planet.

The Juno spacecraft was launched on August 5, 2011 from Cape Canaveral, Florida. On July 31 at 12:41 pm Pacific Daylight Time, Juno reached the farthest point in its orbit of Jupiter for the first time, known as “apojove,” 8.1 million kilometres from the giant planet.