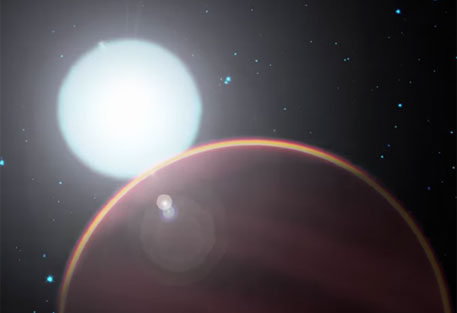 The Hubble Space Telescope of National Aeronautics and Space Administration (NASA) has detected stratosphere, one of the layers of Earth’s atmosphere, on a massive and hot exoplanet—WASP-33b.Anexoplanet,also known as extrasolar planet, is a planet that orbits a star rather than a sun.

The discovery is important as a stratosphere provides clues about how a planet is formed and its composition. This layer includes molecules that absorb ultraviolet and visible light, thus acting as a kind of “sunscreen” for the planet it surrounds, according to a NASA release.

Until now, scientists were not sure whether these molecules were found in the atmospheres of large and hot planets in other stellar systems.

“Some of these planets are so hot in their upper atmospheres, they’re essentially boiling off into space,” AviMandell, a planetary scientist at NASA’s Goddard Space Flight Center in Greenbelt, Maryland, said.

“At these temperatures, we don’t necessarily expect to find an atmosphere that has molecules that can lead to these multi-layered structures.”

On Earth, the stratosphere is above the troposphere–the active-weather region that reaches from the ground to the altitude where nearly all clouds top out. In the troposphere, the temperature is warmer at the bottom and cools down at higher altitudes.

On Earth, temperature inversion occurs because ozone in the stratosphere absorbs much of the sun’s ultraviolet radiation, preventing it from reaching the surface,thus protecting the biosphere, and therefore warming the stratosphere instead.

A similar phenomenon (inversion) also occurs in the stratospheres of Jupiter and Saturn. In these cases, a different group of molecules called hydrocarbons are responsible. Neither ozone nor hydrocarbons can, however, survive at high temperatures on most exoplanets. This had earlier led scientists to debate as to whether stratospheres exist on them at all.

Researchers analysed observations made with Hubble’s Wide Field Camera 3. The camera can capture a spectrum of the near-infrared regions where the signature for water appears. Scientists can use the spectrum to identify water and other gases in a distant planet’s atmosphere and determine its temperature, the release reads.

“Understanding the links between stratospheres and chemical compositions is critical to studying atmospheric processes in exoplanets,” said study co-author NikkuMadhusudhan of the University of Cambridge. “Our finding marks a key breakthrough in this direction.”