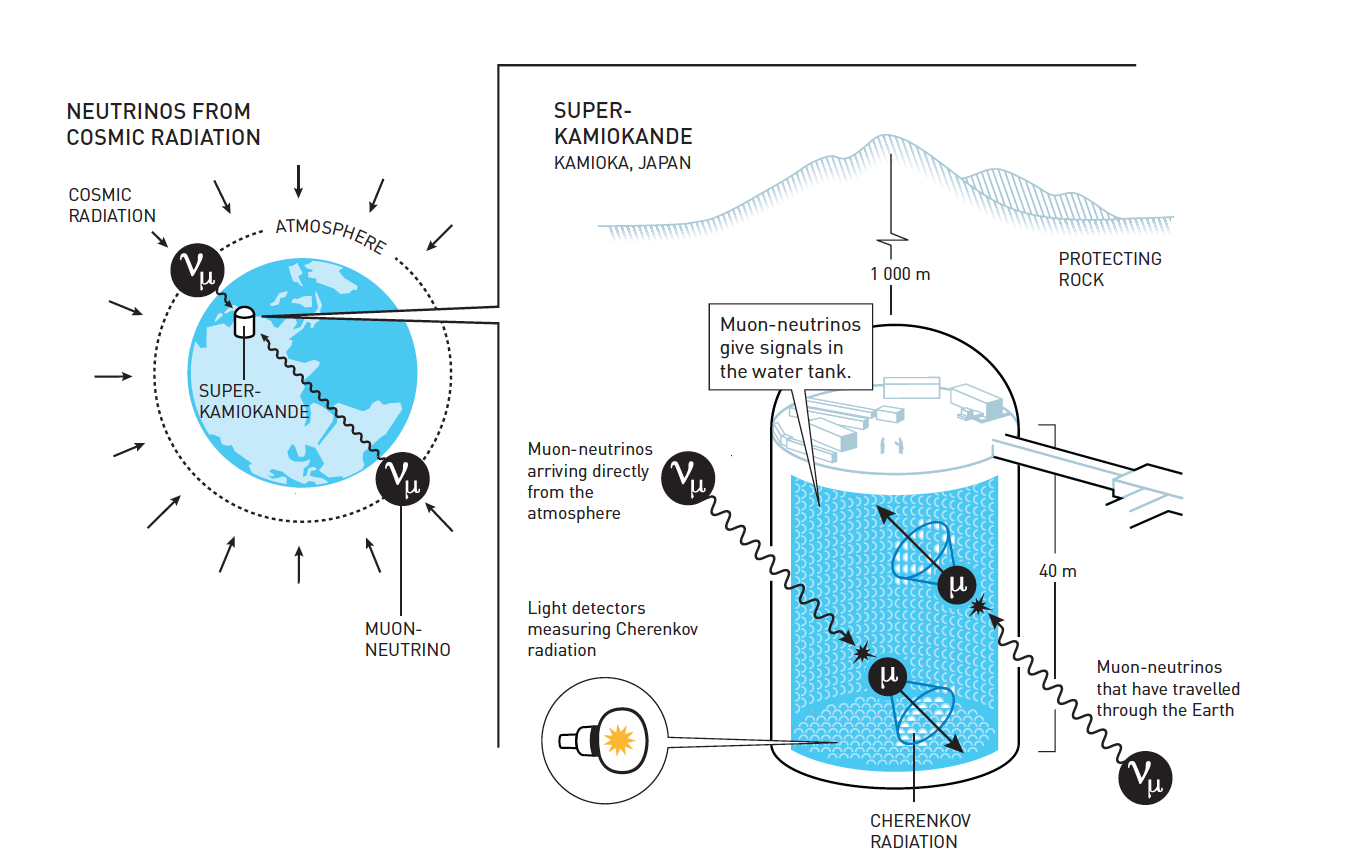 The Nobel Prize in Physics 2015 was awarded jointly to Takaaki Kajita and Arthur B McDonald "for the discovery of neutrino oscillations, which shows that neutrinos have mass," Professor Goran K Hansson, permanent secretary of the Royal Swedish Academy of Sciences, said on Tuesday.

While Kajita from the University of Tokyo discovered that neutrinos from the atmosphere switched between two identities as they travelled through the Super-Kamiokande detector in Japan, McDonald from Queen’s University in Canada observed the change in the identity of neutrinos coming from the Sun.

A neutrino is an electrically neutral and weakly-interacting particle. It was discovered in 1914 when J Chadwick first demonstrated that the β (beta) spectrum from the decay of a radioactive element was continuous, as opposed to the α (alpha) or γ (gamma) spectrum. This seemed to imply a missing particle – the neutrino.

Neutrinos are the most numerous particles in the cosmos after photons (light particles). We live in a world surrounded by neutrinos. Thousands of billions of neutrinos flow through the body every second. The only thing is that we cannot see them and feel them. Neutrinos rush through space almost at the speed of light and hardly ever interact with matter.

But what is their place of origin? Some neutrinos were created during the Big Bang, others are constantly being created in various processes in the space and on the Earth. These processes include exploding supernovas, death of massive stars, reactions in nuclear power plants and naturally occurring radioactive decays. Even inside our bodies, an average of 5,000 neutrinos per second is released when an isotope of potassium decays. The majority of those that reach the Earth originate in nuclear reactions inside the Sun.

In various experiments over the centuries, scientists theoretically calculated the number of neutrinos created in nuclear reactions that keep the sun shining. Measurements of neutrinos captured on the Earth revealed that two-thirds of the Sun’s neutrinos were missing.

One hypothesis to account for the neutrino deficit was that they changed identities on their way from the Sun to the Earth. The standard model proposes that there are three types of neutrinos – the electron neutrino, the muon neutrino and the tau neutrino. While the Sun produces electron neutrinos, the Earth captures only some of these, indicating that the rest are transformed to muon/tau neutrinos.

It would take a quarter of a century before the neutrino was actually discovered. The opportunity came about in the 1950s, when neutrinos began to stream in great numbers from nuclear power plants then being built. In June 1956, two American physicists, Frederick Reines (Nobel Prize Laureate in 1995) and Clyde Cowan sent a telegram to Austrian Wolfgang Pauli (Nobel Prize Laureate in 1945)– the neutrinos had left traces in their detector. The discovery showed that the ghostly neutrino, or Poltergeist as it had been called, was a real particle.

The Super Kamiokande detector is a tank of water, through which, most neutrons pass right through. It became operational in 1996 in a zinc mine 250 kilometres North-West of Tokyo. Some neutrinos collide with an atomic nucleus or an electron in water, creating charged particles (muons from muon neutrinos and electrons from electron neutrinos). These collisions produce flashes of blue light, the shape and the intensity of which reveal what type of neutrino it is caused by.

Super-Kamiokande is a gigantic detector built 1,000 metres below the Earth’s surface. It consists of a tank, 40 metres high and as wide, filled with 50,000 tonnes of water. The water is so pure that light beams can travel 70 metres before their intensity is halved, compared to just a few metres in an ordinary swimming pool. More than 11,000 light detectors are located in the tank’s top, sides and bottom, with the task to discover, amplify and measure very weak light flashes in the ultra-pure water

In the discovery, the detector captured neutrinos created in reactions between cosmic rays and the Earth’s atmosphere. Theoretically, the muon neutrinos coming straight from the atmosphere and those that came from below after traversing the entire globe must be equal.

In the Sudbury Neutrino Observatory (SNO) in Canada, neutrinos from the Sun were measured in a detector that used heavy water instead of water (In heavy water, oxygen is bonded to deuterium, an isotope of hydrogen that contains an extra neutron).  Built in a nickel mine in Ontario, Sudbury began the observations in 1999.

Significance of the discovery and the road ahead

The standard model of particle physics has so far been immensely successful in accounting for experimental challenges. This discovery that neutrinos have a certain mass, however small, marks the first dent in our present understanding of fundamental constituents of matter.

As it may seem, we have only just begun to peel the cosmic onion, layer by layer.