The periodic radio waves hitting Earth from a neighbouring galaxy are unlikely to be from aliens, but the possibility cannot be ruled out 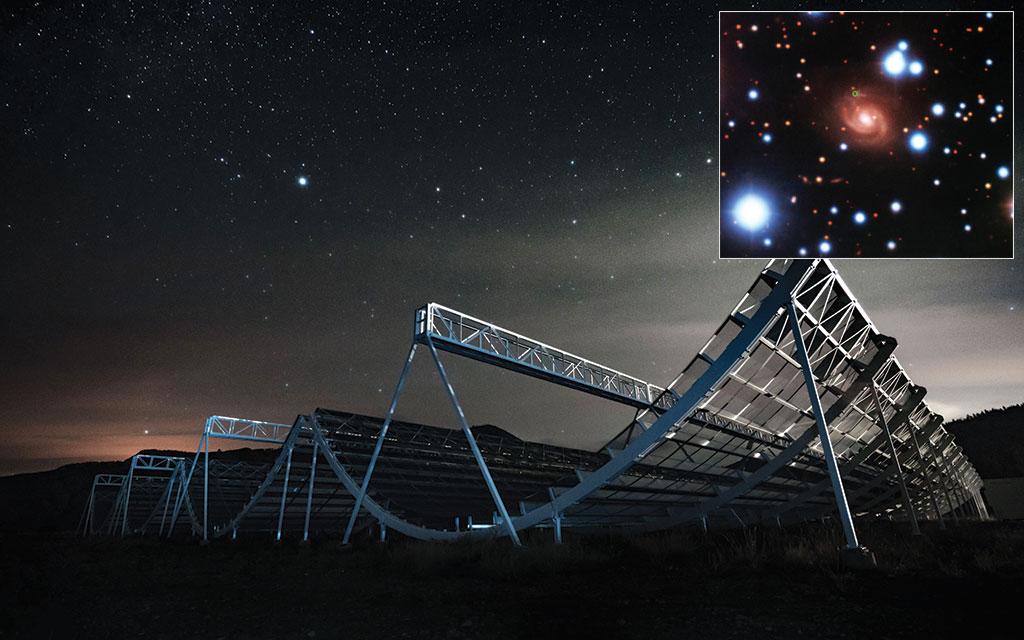 The CHIME radio telescope in Canada has been recording the Fast Radio Burst (FRB) 180916.J0158+65 since 2018. (Inset) Image of the host galaxy with the region containing the FRB source encircled in green (Photographs: Dunlap Institute/CHIME Collaboration, AURA)

All possibilities should be considered, including an artificial origin, says Abraham Loeb, chair, department of astronomy at Harvard University, US, referring to the periodic bursts of radio waves emanating from a galaxy 500 million light years from Earth.

First noticed in September 2018 by the Canadian Hydrogen Intensity Mapping Experiment (CHIME), a radio telescope at the Dominion Radio Astrophysical Observatory in British Columbia, Canada, the waves have created ripples across the globe for one reason — they arrive in a pattern. This gave birth to theories that they could be from an alien civilisation.

Fast radio bursts (FRBs) are not a new concept. The first one was noticed in 2007 and scientists have documented 110 FRBs so far. A vast majority of FRBs are isolated, with just 10 so far repeating themselves. Even more rare is identification of the host galaxy of the source of FRBs, which has happened with only four FRBs.

But none has been as remarkable as the current signal. Apart from repeating and helping in identification of its host galaxy and source (named FRB 180916.J0158+65 by CHIME scientists), it has arrived in cycles of 16 days, accurate to the second. The wave hits Earth for a millisecond once or twice every hour for four days and then goes quiet for 12 days. Between September 2018 and October 2019, CHIME documented 28 such cycles.

Shriharsh Tendulkar, a postdoctoral fellow at the department of physics, McGill University, Canada, and one of the researchers studying FRB 180916.J0158+65 told Down To Earth on February 20, 2020, that the signal was still being received. He, however, did not disclose whether the pattern too had stayed, saying the data cannot be divulged since the study is going on. Nonetheless, what causes repeating FRBs remains a mystery that scientists continue to struggle with.

Initially, it was believed that the collision of black holes or neutron stars (extremely dense and small stars, with radius sometimes as short as 50 km, composed mostly of neutrons) triggers them. But the discovery of repeating FRBs debunked the theory of colliding objects.

“It is most likely that FRBs are the bright analogs of pulsars, which are spinning neutron stars with strong magnetic fields,” speculates Loeb. Another possible source of FRBs could be very young neutron stars (only decades old) with extremely strong magnetic fields, called magnetars, he says. Yet another possibility is FRBs being a mixed population, with a variety of source types, he says.

The reason behind periodicity too could be different. The cyclicity of FRB 180916.J0158+65 suggests that something in the orbit of the source is causing the outbursts, says Seth Shostak, an astronomer with the Search for Extraterrestrial Intelligence (SETI), a non-profit research institute based in Mountain View, California, US. “Maybe some exotic star encircling a black hole, or the reverse,” Shostak adds.

Loeb says that the periodicity could be because of the FRB’s origin from a binary star system (two stars revolving around each other), with the revolution of one blocking the radio wave from the other towards Earth. It could also be caused by the changing orientation of the radio beam due to factors unknown, he says. So how can one study FRBs?

If we discover an extremely bright and repeating FRB in a nearby source, it could we could study its environment in great detail and identify their nature, says Loeb. “Another breakthrough could originate from detecting FRBs at other wavelengths in addition to radio (optical, infrared or X-rays). This could provide an important clue about the nature of their central engine,” says Loeb. To illustrate, if the wave is in the optical spectrum, we will be able to see the source of the FRB.

“Could it be that radio bursts are caused by aliens trying to either get in touch or simply make their presence known? Don’t bet on it,” says Shostak. FRBs are an extremely inefficient way to communicate because it’s impossible to put much information in a short radio burst, he says. A civilisation trying to make contact is likely to opt for a more informative mode of communication.

Shostak also says that FRBs whose locations we have identified are all over the universe, separated by billions of light years. “That means any alien memo instructing others to make the same type of short transmissions to the cosmos would arrive billions of years apart. A coordinated response seems unlikely,” he says.

Loeb disagrees with Shostak and says that the signal might not be coordinated or intentional but that does not rule out the possibility of its source being an alien civilisation. The issue is not “cooperation, since powerful signals are not necessarily used for communication. A civilisation could generate a powerful beam of light to propel cargos and we would detect the leak of that radiation,” he argues.

Despite the divergent views, scientists say the discovery is huge. Much as the discovery of the multilingual Rosetta Stone in 1799 helped decode the Egyptian hieroglyphics, this newest member of the cosmic bestiary may unlock an understanding of what FRBs actually are,” says Shostak.

Until that happens, no option can be ruled out.