Though India is churning out research papers at a higher rate, scientists are not celebrating as yet 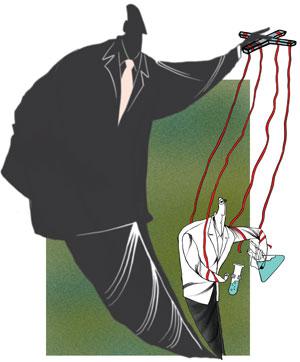 First, the good news. India’s contribution to the global research output in the field of science and technology (S&T) has increased at an astounding rate in recent years. Between 2009 and 2014, it has grown at a compound added growth rate (CAGR) of nearly 14 per cent—the highest in the world, says a recent report of Elsevier, an international academic publishing company. The global average CAGR for S&T research output is 4.1. For the past three years, India has also been ranked 13th among over 150 countries on the Nature Index by scientific journal Nature. The index analyses research performance of institutions and countries.

Now the bad news. The publications suggest though India churns out more research material, few make an impact. According to the Elsevier report, commissioned by the Department of Science and Technology to assess its own achievement, India’s international collaboration was only 16 per cent of its total output in 2013; its national collaboration stood at 32 per cent—much less than that of Brazil (see ‘Research breakdown’). That year, India’s citation impact was a measly 0.75 per cent—this is 25 per cent less than the world average.

Citation count is an important parameter to gauge the impact of a research, but it is not always the case, says K L Chopra, professor at the Indian Institue of Technology (IIT), New Delhi. A paper is cited if it reports new research, phenomenon, theory, breakthrough, product or process; or supports or contradicts some important result already published. A paper is self-cited by an author in the form of reference of earlier work—important or not. But even a very good paper in an esoteric field such as pure mathematics may not attract many citations as not many researchers are involved in the area. Besides, papers published in globally-reputed journals attract more citations, and not many Indian papers are published in them, Chopra explains.

There is no denying that there are fundamental problems staring S&T research in India’s face! For instance, lack of innovation plagues Indian science. Its ranking in the Global Innovation Index has slipped consistently, from 62 in 2011 to 81 in 2015. “Most papers from India are essentially minor extensions of the work of others. They are only nano-increments to knowledge,” says Chopra.

“It’s like looking through windows others have opened but never managing to open a window ourselves,” says R A Mashelkar, former director general of the Council of Scientific and Industrial Research (CSIR).

How can Indian scientists open new doors? Recounting his personal experience, Mashelkar talks about the Kite-Flying fund he floated in 1989-95 as director of the National Chemical Laboratory. A small budget was earmarked for funding “proof of concept” studies on some out-of-the-box ideas.

On the same lines, a New Idea fund was created by CSIR between 1995 and 2006, when Mashelkar was director general.

Both initiatives yielded some top-class research. A project on spin computing by N Chandrakumar received a US patent. Mashelkar suggests that we need to create new mechanisms to trigger “out-of -the-box” thinking.

Unfortunately, India’s reseach and development (R&D) spending has remained fairly constant, at less than one per cent of GDP since 2006. In contrast, South Korea spends nearly four per cent of its GDP on R&D. And in such countires, industries contribute nearly 80 per cent of the total expenditure on R&D. Mashelkar says there is a need to provide incentives such as tax exemptions to the industry to forge public-private partnerships in R&D.

Some initiatives such as CSIR’s New Millennium Indian Technology Leadership Initiative (NMITLI) offer hope. The largest public-private partnership in R&D in the country, NMITLI has created 57 collaborations in diverse fields, such as agriculture and plant biotechnology, general biotechnology, bioinformatics and pharmaceuticals, chemicals and communication technology and energy. One of its achievements is an enzyme-based biological leather processing technology to replace the highly-polluting chemical-based technology.

Experts also point out the need to build a robust infrastructure. K VijayRaghavan, secretary, department of biotechnology, Ministry of Science and Technology, says the process for the release of funds needs to improve. “Our finance system needs to understand that a grant proposal is not wine. A file does not improve with age. There are scientists and students at the other end whose livelihoods depend on timely release,” says VijayRaghavan.

Mashelkar says bureaucracy, at least in part, is responsible for the declining quality of scientific research. Institutions hold scientists responsible if their experiments do not yield desired results, which reflects in their audit and, perhaps, the funds directed to them. All the while, they forget that science is an exploration, unaware of the scientists’ desires.

Others suggest better utilisation of existing infrastructure. Y S Rajan, formerly with the Indian Space Research Organisation and founder of organisations like the Technology Information, Forecasting and Assessment Council, says institutions like IITs have more than enough facilities—a lot of the space in these institutions is unused.

“India is doing extraordinarily well in some aspects of S&T research. Yet, we fail miserably on two counts,” says VijayRaghavan. “First, we grossly underperform by not collaborating enough nationally and internationally. Second, there is little effort to implement S&T initiatives through Central or state governments, or through other mechanisms.” Scientists must also propose ambitious collaborative programmes that rise above individual or institutional needs, VijayRaghavan adds.

At the same time, it’s important to go beyond cold numbers, and focus on how much of the research has been useful in solving socio-economic problems. What is the role and the contribution of corporate India? Most importantly, have common people benefitted?