With DNA adding to the slippery narratives about the past; historians, archeologists, and geneticists need to collaborate if we are to take a less bigoted view of history

Where are you from? This curiosity, often traded between strangers in almost all cultures, signifies our abiding fascination with origins. What we believe where we come from or who we are is a collage of family memorabilia like photographs, diaries and letters, certificates of birth and blood type, and of course memories passed down the generations. However, if were to trace back our lines of descent, most of us would run into a foggy terrain past our grandparents (how many of you know about the lifeworlds of your great grandparents?). The picture turns even grainier if you happened to be an immigrant, or adopted, or born to a surrogate mother, or even someone with parents of mixed ethnicity, caste, religion, or nationality.

A person’s lineage is like the Matryoshka doll, with each nested doll carrying a story within a story of increasing complexity coloured by a subjective interpretation of surviving vestiges of the past. If the smallest doll is the story of an individual going back to, say, three generations, it is circumscribed by fatter dolls that tell grander, and often fabricated,tales about her clan or community, about the region or empire or nation, and finally about the world, in that order.

In recent years, DNA as witness has added another twist to the already complicated narratives about the past. Reading history through DNA can be done in two ways. One, extract it from the remains of the ancient dead, reconstruct it, and then see if it is related to the living. Two, compare the DNA of two or more living persons or populations to see if they had a common ancestor. This is possible because the DNA of all humans contains just one spelling error for every 1000 letters of the 3 billion-letter-long genetic Alphabet. The more such errors (of which there are millions) you share with another person the more related you are to him or her.

What makes genetic history (as it is referred to by some) different, not to mention problematic, is that unlike scientific techniques used by historians and archeologists, such as carbon dating or remote sensing, DNA clues are seen as markers of identity. Perceived as a more credible fingerprint of bygones, it is making bold claims about our pasts, individual as well as collective, that are often at odds with how we have imagined them for long. Hence their popular, not to say dangerous, appeal. Consider media headlines like “Britain is more Germanic than it thinks”; “We Europeans are Asians”.

As British geneticist Bryan Sykes, a pioneer of ancient DNA research and founder of Oxford Ancestors, a company that traces ancestry through DNA, wrote in his bestselling Seven Daughters of Eve: “Within the DNA is written not only our histories as individuals, but the whole history of the human race… Our DNA does not fade like an ancient parchment; it does not rust in the ground like the sword of a warrior long dead. It is not eroded by wind or rain, nor reduced to ruin by fire and earthquake.”

In the early 1990s, the American geneticist Luigi Luca Cavalli-Sforza mounted the Human Genome Diversity Project, an ambitious attempt to reconstruct the evolution of humans and language by collecting DNA from across the world. The project, however, was shelved, as indigenous people feared pharmaceutical companies might exploit their DNA to make huge profits, and even patent their genes. National Geographic launched a similar venture called the Genographic Project in 2005, but it wisely renounced all rights over the genetic material. It even developed a method of sampling DNA through a mouthwash instead of blood, which many people found suspicious. Not surprisingly, half a million people signed up.

The testimony of DNA changes the contours of the politics of identity in curious and complex ways. In an experiment conducted by sociologist Wendy Roth at the University of British Columbia, a woman who found she had a Jewish past was invited to a synagogue but she found the religion stifling. Some who discovered they had Native American ties felt confused over whether they should avail of government largesse that went along with that identity. 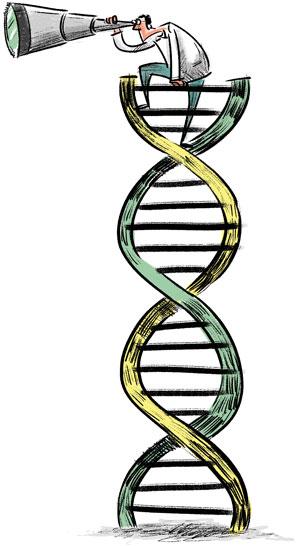 DNA could also revise personal biography in unflattering ways. For instance, when it exposed Thomas Jefferson as having sired many kids through a black slave. Or when Hollywood actor Ben Affleck tried to suppress the fact that some of his ancestors were slave-owners. Ancestry tests are not common in India yet, presumably because it is still expensive (about Rs 15,000), or perhaps they don’t want to know considering how fiercely Indians hold on to their identities of caste, community and religion. Imagine a Brahmin finding out he or she has roots in a Dalit caste.

Anyway, geneticists are using the same tool to refine prehistory by tapping into the global DNA repositories of companies like National Geographic—we now know, for instance, that we are not pedigreed as our ancestors had sex with archaic human species like Neanderthals in Europe, Denisovans in Siberia, and Hobbits in Indonesia, or that the Australian aborigines are related to some tribes in South India, suggesting the early humans from Africa took the coastal route to Australia. But it is now being used to throw light on messy histories of ancient and medieval worlds too—for instance, whether the present-day Britons are descendant of Germanic tribes.

It is the task of historians, who look at written records, and archeologists, who work with material sources, to reconstruct the past in as plausible a manner as possible. The trouble is that the farther we go back, the sparser and flimsier the evidence gets, which willy-nilly renders any interpretation of what may have happened not only ambiguous but also contentious as it has to reckon with fiercely-held prejudices of religion, nation or political ideology.

Genetic historians have gate-crashed into the enterprise of putting together the scattered, missing, and distorted pieces of this impossible jigsaw. Nothing illustrates this more tellingly than the longstanding controversy among historians over whether ancient Indians who spoke Sanskrit were immigrants from the steppes of Central Asia or were they natives.

DNA as a testament of history has complicated the debate. Till recently, studies on mitochondrial DNA (which is passed on from mother to daughter) found little trace of foreign genes in Indians. However, more recent studies of DNA on the Y chromosome (Y-DNA, which is passed on from father to son) have found markers shared by people from South Asia, Europe and Central Asia, thus favouring the Aryan migration hypothesis.

Predictably, Hindu nationalists attacked the Y-DNA studies as yet another example of Eurocentric bias while some researchers quibbled that the study sample did not capture the genetic diversity of Indians.

Curiously, even as geneticists spar with each other over this enigma of history, historians appear conspicuous by their silence. Besides the obvious reason that they can neither understand nor scrutinise it, they accuse the new upstarts of cherry picking historical facts that fit the hypothesis suggested by DNA. As the Princeton historian Nicola di Cosmo asked, “if the “knowledge” that informs the definition and description of historical populations, or events such as conquests and migrations, or even the bare chronology, is superficial or wrong, can the scientific results obtained through DNA tests still be useful?”

That said, as genetic interventions into history grow, one hopes that historians, archeologists, and geneticists will find ways of talking and collaborating with each other if we are to take a more nuanced, subtle, and less bigoted view of our past. As Princeton University historian Keith Wailoo argues in Genetics and the Unsettled Past, “whatever the data we draw upon to answer the question who am I… we engage in a willful paring down of multiple lines of descent…the collision of DNA, race, and history is as much about remapping the unsettled past as it is about shaping the unsettled present and imagining the future stretching out before us.”

(This article appeared in the 1-15 November issue of Down To Earth. It is a monthly section which explores the tangled web of modern ideas about science and environment across space and time.)