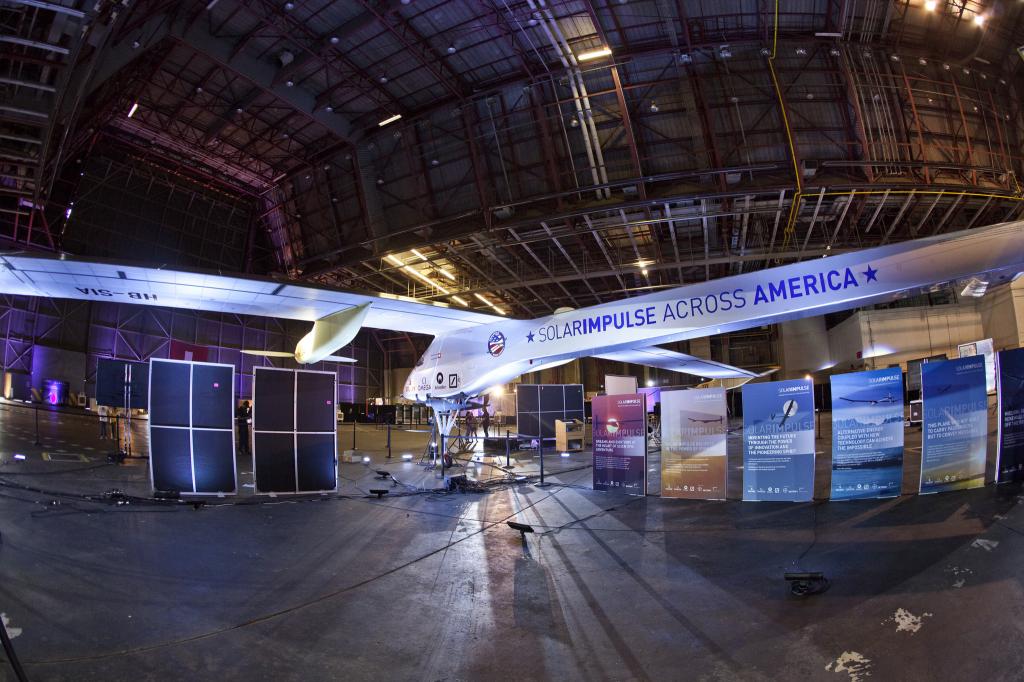 The biggest impact of Solar Impulse will be on the minds of young people still unsure of their future. Credit: Anthony Quintano /Flicker

After 12 years of planning and testing, Solar Impulse has finally completed its epic voyage around the world. The solar-powered plane first set off from Abu Dhabi 16 months ago, and it has since travelled some 25,000 miles (40,000km) over 17 gruelling legs – all without using a single drop of fuel.

Solar Impulse is no ordinary aircraft – it has the span of a Boeing 747 but weighs little more than a family car. Covering these huge carbon-fibre composite wings are more than 17,000 solar cells, which provide energy for its four propellers during the day, while also charging four lithium batteries which provide power during the night.

To save weight, the unpressurised cabin has just enough room for one pilot, no bigger than the front of a typical car. For up to five days and nights the pilots, Andre Borschberg and Bertrand Piccard have to do everything in this confined space. Fly, eat, sleep (just 20 minutes at a time) and wash. In theory, Solar Impulse could fly continuously for many months, but the tiny cockpit means it must land to swap pilots after each leg. As part of their trip they have broken several world records including the longest continuous flight of any solo fixed wing aircraft – almost 118 hours.

But after this epic voyage, the real question is what will be the legacy of Solar Impulse? Are we likely to see 747s with solar cells anytime soon? The short answer is unfortunately no.

Solar Impulse required all those solar cells and four batteries (weighing a quarter of the whole aircraft) just to power propellers that generate around 70 horsepower, similar to a family car. To put this in perspective, the engines on a Boeing 747 have the equivalent power of more than 1,000 cars. The number of solar cells and more importantly the number of batteries to generate and store this energy makes such a plane unfeasible with current technology.

However, while a large-scale solar plane is unlikely to be seen, electric or hybrid electric planes have taken a step forward with the recent announcement of the NASA X-57 all-electric plane. Announced by NASA head Charles Bolden as the first of a new series of X-planes, this plane is powered by an array of 14 small propellers on the leading edge of the wing, promising a five-fold reduction in the energy required for a small plane to cruise at 175mph. Such a design would also mean significant reductions in the aircraft noise and pollution.

While the X-57 isn’t a large-scale commercial aircraft, the technology developed in the project could well make it into hybrid electric planes in the not too distant future, especially with the current rate of battery technology development.

Solar Impulse’s most visible legacy is likely to be in the domestic power market, as any electric car or plane is only as clean as the power source that generates that electricity in the first place. Solar Impulse has helped to raise the profile of solar power and this is likely to make people consider how they can do their bit to use cleaner energy. This took a major step forward with the news that Tesla is soon to fully release its Powerwall rechargeable battery unit – a battery unit that charges using electricity generated from solar panels, which can then be used in the evening or when there has been too little sun. It has the potential to revolutionise both commercial and personal energy use. While there are other competitors the appeal of the Tesla brand is likely to take solar power to a level not seen before.

The pioneering spirit of Borschberg and Piccard may see their legacy in electric planes or domestic solar energy, but perhaps its biggest influence will be on the minds of young people still unsure of their future. The world is crying out for more engineers and scientists, and projects such as Solar Impulse show how exciting science and engineering can be. In the same way that Apple’s iPad and Siri are a throw-back to the legacy of Star Trek, the planes we fly in 40 or 50 years may have their origin in projects like Solar Impulse.