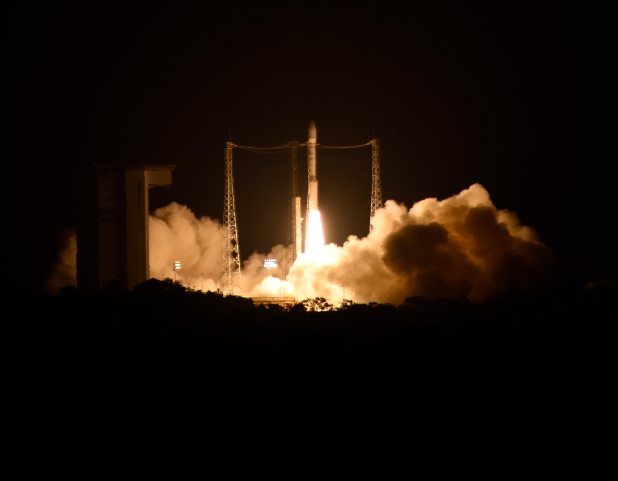 The European Space Agency’s (ESA) space probe, LISA Pathfinder, lifted off at 04:04 GMT on Thursday to hunt for ripples in the space-time continuum predicted by Einstein’s General Theory of Relativity (GTR).

Also known as gravitational waves, these ripples may help us locate black holes. This is because, unlike light, gravitational waves are postulated to travel through matter unchanged. Other potential, although highly theoretical, applications of these waves are in propulsion (moving space objects and missiles in flight) and remote initiation of nuclear events.

The mission, mounted on rocket Vega, was launched from the spaceport in Kourou, French Guiana.

LISA will join a number of endeavours already looking for gravitational waves, here, on Earth. The most famous among these is the Laser Interferometer and Gravitational wave Observatory (LIGO) at Louisiana, a joint project between scientists at MIT and Caltech and others.

According to LIGO scientist Amber L Stuver, gravitational waves are believed to be created in events where massive objects change shape in time. These events include collision of neutron stars and black holes.

However, these waves have not been detected even 100 years after Einstein first proposed the concept in a paper published on December 2, 1915. The problem in detecting gravitational waves is that they are really tiny; in a million kilometre-long space-time fabric, a pair of orbiting black holes would produce gravitational waves of the order of the size of an atom.

LISA intends to test if shielding objects from external forces will enable us to measure the minute effects of gravitational waves. This was done by sending a pair of identical 46 mm gold and platinum cubes into space and isolating them from all external forces except gravity. Scientists at ESA will then monitor their positions with unprecedented precision. The real measurements will likely have to wait almost two decades for the follow-up mission, provisionally also called LISA. It will involve three satellites positioned in a triangle, 5 million kilometres apart from each other.

Detection of these gravitational waves would lend greater credibility to General Theory of Relativity, which took the scientific world by storm when it was first published. As English physicist-cum-novelist CP Snow said, “If Einstein hadn’t thought of the Special Theory of Relativity when he did, someone else would have, probably within five years. It was an idea waiting to happen. But the general theory was something else altogether. Without it, it is likely that we would still be waiting for the theory today.”