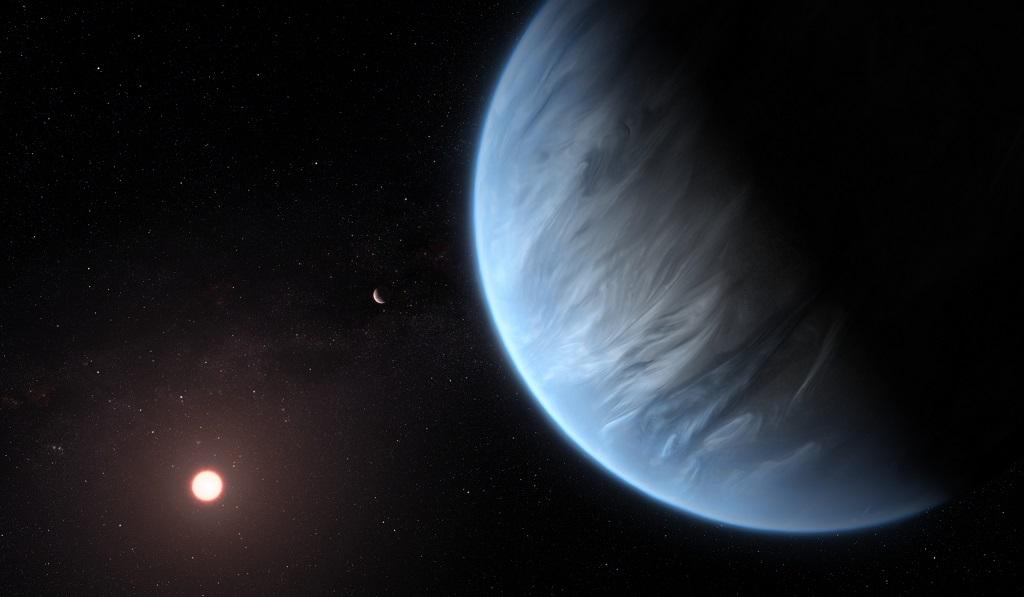 This artist’s impression of the planet K2-18b, its host star and an accompanying planet. Photo: ESA/Hubble, M Kornmesser

In a first, water vapour has been detected on K2-18b — a potentially ‘habitable’ planet — by a team of scientists using Nasa and the European space agency's Hubble Space Telescope.

The team from University College London (UCL) found signatures of water vapour in the atmosphere of K2-18b — an exoplanet that orbits around a small red dwarf star K2-18, nearly 110 light-years away in the constellation Leo, according to the United States' space agency Nasa.

The findings also indicated the presence of hydrogen and helium in the planet’s atmosphere. Other molecules such as nitrogen and methane could also be present, but current observations have not detected them, NASA said.

K2-18b was first discovered in 2015 by Nasa's now retired Kepler space telescope. It was found orbiting within the red dwarf star's habitable zone, making it an ideal candidate to have liquid surface water. Having a mass that is eight times greater than Earth's, K2-18b is also known as Super-Earth — exoplanets with masses between those of Earth and Neptune.

The Kepler satellite mission discovered nearly two-third of all known exoplanets. While the mission indicated that five to 20 per cent of these are located in the habitable zone of their stars, finding their atmospheric properties has remained elusive until now.

The new finding offers an 'unprecedented opportunity' to gain insight into the composition and climate of habitable-zone planets, according to the findings published in the Nature Astronomy journal on September 11, 2019.

“Finding water in a potentially habitable world other than Earth is incredibly exciting. K2-18b is not ‘Earth 2.0’ as it is significantly heavier and has a different atmospheric composition. However, it brings us closer to answering the fundamental question: Is the Earth unique?” said first author Angelos Tsiaras from CSED, in a statement.

“This study contributes to our understanding of habitable worlds beyond our Solar System and marks a new era in exoplanet research, crucial to ultimately place the Earth, our only home, into the greater picture of the Cosmos,” Tsiaras added.

The team used archive data from 2016 and 2017 captured by Hubble and developed open-source algorithms to analyse the starlight filtered through K2-18b’s atmosphere.

They also observed eight transits — the moment when an exoplanet passes in front of its star — using Hubble’s Wide Field Camera 3, according to another paper (draft version) published in Cornell University’s ArXiv library on September 10.

K2-18b could be the only exoplanet known to have both water and temperatures in its atmosphere to sustain liquid water on a rocky surface, NASA said, adding this needs to be confirmed by further studies.