What if the Lazarus returns

We may never be able to bring extinct species back to life. Yet, scientists are drawing up secret plans for their resurrection 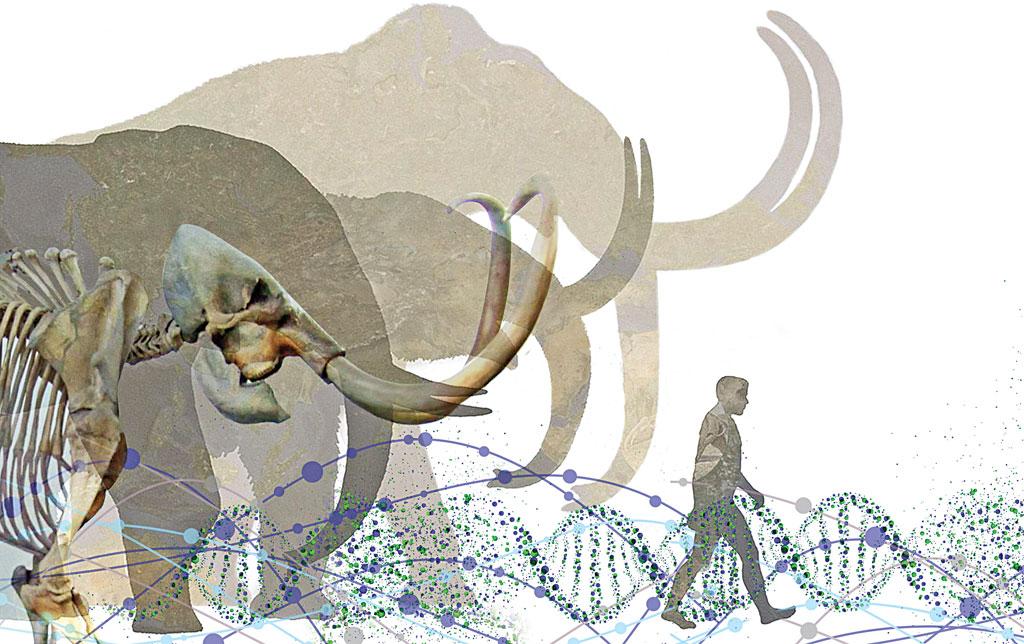 IN SEPTEMBER last year, high up in the mountains of New Guinea island, scientists were thrilled to find, on camera traps, 15 members of a wild dog species not seen in the wild for over half a century. Long labelled a living fossil (about 200 members survive in captivity), the highland wild dog (HWD) is the most primitive living canine.

News of its sightings was soon followed by reports that some people had “plausibly” seen a Tasmanian tiger, a dog-like marsupial predator that disappeared more than 80 years ago in northern Queensland, prompting a scientific expedition in its quest.

It’s bewildering, in a happy way no doubt, that in this age of the modern panopticon—satellite eyes, scientific expeditions, wildlife photographers and all that jazz—creatures as large as the HWD or the Tasmanian tiger (if the alleged sightings are confirmed) could go under the radar for so long. Imagine, for a moment, that the Asiatic cheetah, which once graced the Indian grasslands and whose last three representatives were murdered in 1947 by the Maharaja of Surguja, a notorious serial killer of big cats, in present-day Chhattisgarh, were similarly found lurking in the forests of central India!

Wish as we may, and we all do, that the HWD is not a freak lost-and-found case, the truth is that the planet is in the throes of The Sixth Great Mass Extinction, which, scientists reckon, has already wiped out hundreds of species like the Tasmanian tiger, the woolly mammoth, the sabre-toothed tiger, and the steppe bison, to name just a few of the charismatic ones.

But if some maverick scientists are to be believed, it might yet be possible to resurrect them (or something like them, at least) by doing some genetic hocus-pocus on their dead DNA, intact or broken.

Luck is on the side of the Asiatic cheetah. For, while it may have disappeared from India for good, about 100 of its cousins still survive, albeit precariously, in Iran. This means if it could be cloned, Yuz, as this symbol of grace and agility is known in Persian, may yet be seen sprinting again in the Indian grasslands.

Now such claims, especially about reviving the bygones, may smack of audacity, even hubris, but armed with a new cutting-edge genetic toolbox, scientists can now do stuff with the basic genetic material that would have seemed fantastic just a decade ago. They can now extract highly tattered DNA from bones and hair of extinct species, decode its grammar cheaply and rapidly, and play around with the genetic structure of living species.

De-extinction, as the revival of extinct species is called, is probably many years away, but the first few experiments have shown promise. Or, so its apologists would like us to believe. In 2009, a team of Spanish and French scientists successfully cloned the Pyrenean ibex, also known as the bucardo, in the womb of a surrogate, albeit the calf died within minutes. In 2013, Australian scientists claimed that they had managed to create embryos of an extinct frog, called the Lazarus, by stitching DNA from its frozen cell into the genetic fabric of a living species.

The most glamorous of the de-extinction projects is, without doubt, the woolly mammoth, an ancestor of the modern Asian elephant that roamed the tundra steppes in Russia and North America about 12,000 years ago but which gradually disappeared about 4,000 years ago, thanks presumably to climate change and the arrival of a hunter extraordinaire called Homo sapiens.

This shaggy beast is at the moment enjoying a different kind of revival by way of its celluloid avatar, Manny, in the Ice Age series. But piecing it together in the lab is a different ball game altogether, not very different from solving a jigsaw puzzle several of whose pieces are either missing or altered.

It turns out that you can remake the woolly mammoth in more ways than one. Some scientists like Akira Iritani of Kyoto University in Japan believe that they can clone the hairy tusker by extracting operative cells from its frozen relic. Akira had claimed that he would clone the mam moth by 2016 but there is no sign of it yet.

Most people imagine that freezing something protects it against decay. True, and, to be sure, most of the mammoth remains—eyes, teeth, hair, blood, etc—are preserved in a frozen state. However, unless one adds an anti-freeze substance to it, like they do now with stuff such as sperms, eggs, dead bodies and seeds that need to be frozen to be stored for a long time, water in the tissues turns into ice, and as it expands it ransacks the cell’s delicate scaffolding.

Barring a rare exception in 2008 when Japanese scientists claimed to have cloned mice from brain cells frozen for over 16 years—a feat yet to be replicated—all attempts to clone a frozen cell have so far come to naught.

Harvard University’s George Church, one of the most vocal champions of de-extinction, is convinced that the Japanese scientists are barking up the wrong tree. He is instead trying to identify genes linked to particular traits of the mammoth, such as genes that made it shaggy or protected it against glacial cold, and then sew them into an Asian elephant’s genome. He claims that he is just a couple of years away from creating the first hybrid mammoth embryo.

Woolly mammoth may have become the poster boy of de-extinction, but work is in progress on other species too, notably the heath hen and the passenger pigeon, both extinct birds from North America. Revive and Restore, a non-profit started by Stewart Brand, author of Whole Earth Discipline: An Ecopragmatist Manifesto, to boost de-extinction projects, lists many extinct species that could be revived, as well as endangered species that may be restored with genetic assistance.

For all the euphoria over de-extinction, we will never be able to revive a lost species with full fidelity. At best, science can smuggle some of the lost traits of an extinct organism into its nearest relative, and hope that it would be viable in the wild.

As Beth Shapiro, a specialist on ancient DNA at the University of California, Santa Cruz, explains in How to Clone a Mammoth, “by engineering these extinct traits into living organisms…we can reestablish inte ractions between species that were lost when one species went extinct…This—the resurrection of ecological interactions—is, in my mind, the real value of de-extinction technology.”

But critics find such arguments facile, even naïve. Besides being expensive, quixotic and unpredictable, they say, de-extinction is a Trojan horse that will event ually weaken the will of the public as well as the state to protect endangered species and habitats. Moreover, there are uncom fortable ethical questions like whether an ill-equipped resurrected lost species would be able to survive in an alien environment; or, whether it is conscionable to exploit the already endangered Asian elephant as surrogate to create a pseudo mammoth.

Some argue that if we are not able to protect the habitats of existing species, how will we accommodate de-extinct species. Anticipating this problem, Sergey Zimov, a geophysicist with the Russian Academy of Sciences, set up in 1988 the Pleistocene Park in Siberia to welcome resurrected mammoths as and when they arrive. But, surely, this solution cannot possibly apply to most parts of the world where humans are constantly in conflict with wildlife.

De-extinctionists, on the other hand, argue that in the Anthropocene, where humans have altered the planet irreversibly, the old-school idea that it is enough to preserve habitats to protect species is no longer tenable. As M R O’Connor writes in his Resurrection Science, “returning to a prelapsarian state of untouched wilderness, if one ever truly existed, is impossible.”

With old distinctions between human and animal, wild and domestic, freedom and captivity, and ethics and conservation ethics withering away, the discipline of conservation biology appears to be in a crisis. So when Edward Wilson in his latest book Half-Earth demanded that half the planet be converted into wilderness, critics attacked him for disregarding the rights of displaced communities.

De-extinction probably represents one extreme in a spectrum of new ideas about how to reimagine nature in the Anthro pocene. To name a few notable others, genetically retrofitting a species so that it can adapt to climate change; rewilding, which involves restoring ecosystems by reintroducing keystone species that once graced them; creating new, more resilient hybrids; and replacement ecology, in which ecosystems that cannot be restored to their original condition are turned into homes for alien species.

Stewarded by such ideas, the earth might look like a very different place 25 years from now—cheetahs, lions, panthers and tigers sharing the same home; Asian elephants roaming the forests of Europe and North America; woolly mammoths and steppe bison rambling in Siberia and North America; cities punctuated by micro forests; islands, such as New Zealand, purged of all predators; and, even if quite implausibly, the expression “as dead as a dodo” going extinct.

All said and done, the ethical question that looms large upon all of us is whether humans should be writing the script for nature’s stories. As the American conser vation biologist George Amato told a perplexed O’Connor, “Conservation is a complicated place. It’s a human ethical construct. If you wanted to be purely scientific about it, you have to ask: what is the scientific question? Is the world better with gorillas or without them? That’s not science, it’s values.”

Wise words, but then they beg the question: whose values will determine the future Anthropocene? No easy answers there, not at least now, especially in a post-truth world. We can only hope against hope that the world 25 years from now will be a less precarious place for all Earthlings.

Rakesh Kalshian is a science journalist.