World Earth Day: A new landscape on the horizon 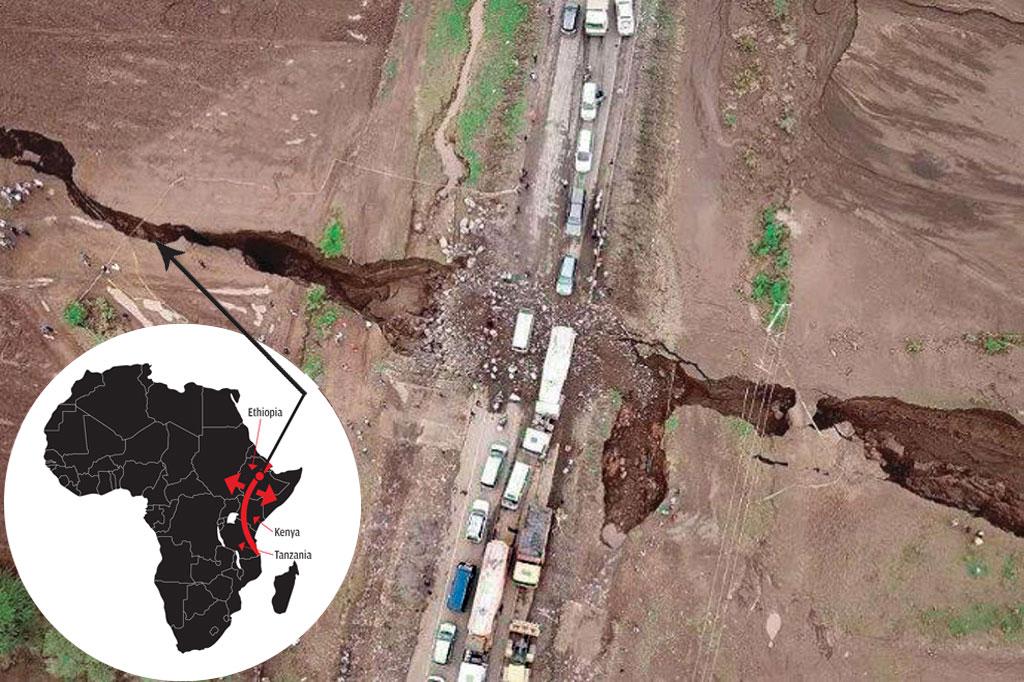 THE EARTH is always under constant churn due to geo-logical forces at play. These changes in the planet’s interior remain hidden to the human eye and become visible only over millions of years. But recent scientific evidence has given a glimpse of the Earth’s changing contours—the African continent is splitting into two. In March last year, people in Narok County, a region just west of Nairobi, Kenya, were shocked when they saw a large crack on the ground that ap-peared during an intense spell of rain and flooding.

The crack is 57 km long. “This is a locus of a future ocean formation,” says Alexey Ivanov, chief researcher at the Center for Geodynamics and Geochronology of the Institute of the Earth’s Crust in Irkutsk, Russia. Such an event happened 138 million years ago when the South American and African continents separated to give rise to the current South Atlantic Ocean.

“Knowing the past allows predicting the future,” says Ivanov. All such signs on Earth’s surface point to a totally new landscape, which will resemble how it looked like when it was formed 4.5 billion years ago—one huge continent. The farthest scientists can predict is that 250 million years from now all continents will unite again in one supercontinent and then will break apart again along the future rift systems (see map “The new continental drift”). 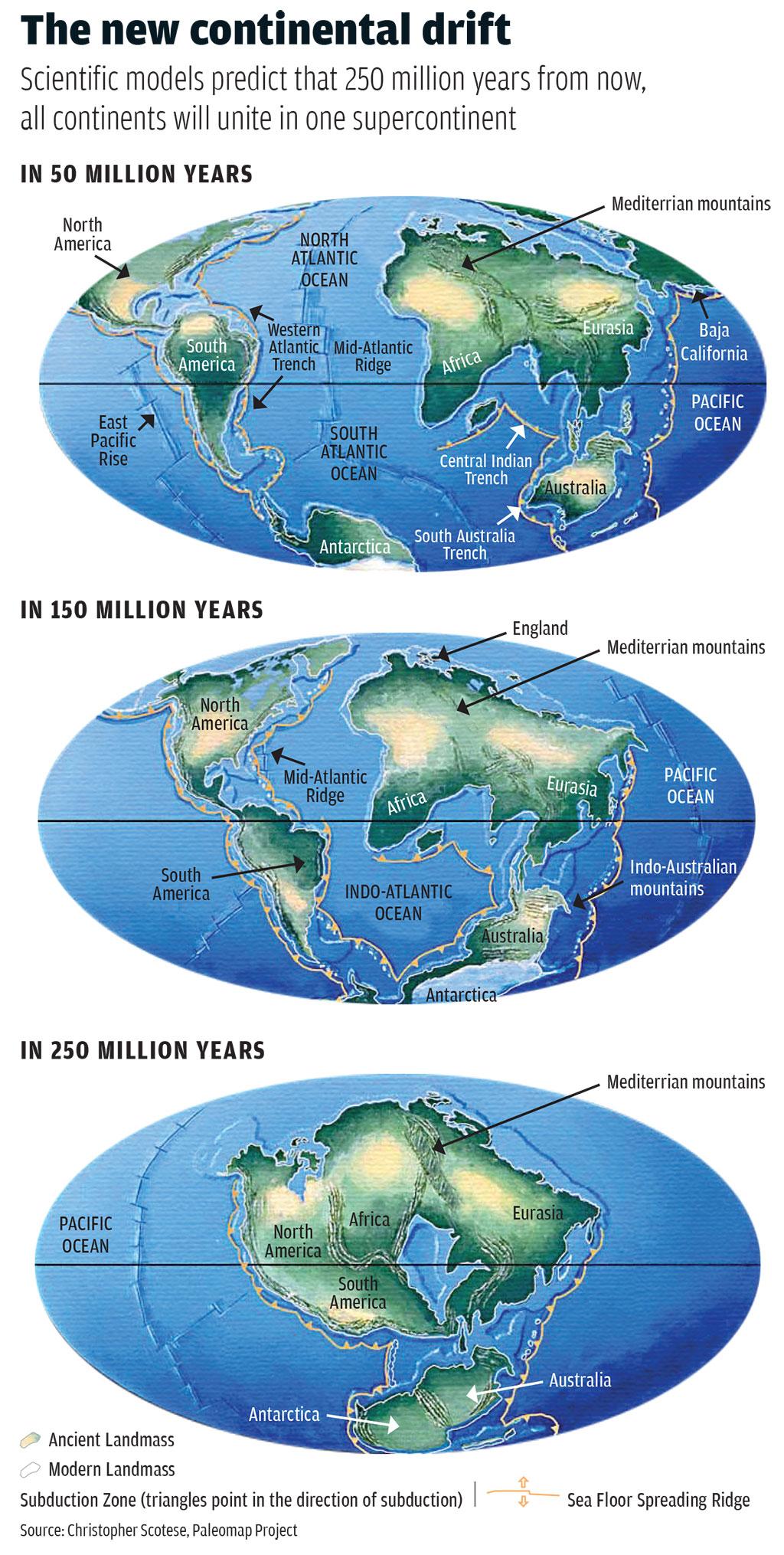 At first, geologists thought the crack in Kenya was formed due to “erosion of soft soils infilling an old rift-related fault,” says Lucía Pérez Díaz, a post-doctoral researcher of fault dynamics at Royal Holloway, University of London. Later geologists revealed that the crack had existed for quite some time, but was filled with ash from Mount Longonot, a volcano nearby. The rain had washed away the ash to expose the crack. This triggered a debate whether the crack was a part of the East African Rift system.

Continental changes take place at the boundaries of tectonic plates which are divisions of the uppermost layer of the Earth and swim around on the fluid mantle layer below it. These plates periodically crash into each other, giving rise to earthquakes and volcanic eruptions when the intensity is less over short periods of time. Over longer periods of time, they create all the geological and geographical features that we find on Earth like mountains, valleys and oceans.

One of these processes is an intra-continental rift system which acts between tectonic plates and can give rise to rift valleys or even new oceans. The African Rift Valley, which is between Ethiopia and Kenya, is a classical example of this geodynamic process. There, volcanism, earth-quakes and fracturing of the Earth’s surface result from the enormous forces that tear the eastern portion of the African continent apart, says a study published in Nature Communications in March 2019. The study, funded by the National Geographic Society and involving multiple global scientific institutes, was able to reconstruct the geologic history of an almost unknown section of the African Rift Valley: the Ririba rift in south Ethiopia.

“In the East African rift, we can observe processes that are important far beyond the region,” says Sascha Brune of GFZ German Research Centre for Geosciences. “The same dynamics that determine the rift development in East Africa led to the opening of the Atlantic and Indian Oceans millions of years ago and thus had a decisive influence on the face of the Earth.”

“The East African rift system is more active in terms of volcanism and it is connected to the global ocean rift (ridge) system through the Afar-Red Sea—Gulf of Aden triple junction. The Red Sea and the Gulf of Aden are the rifts along which two continents break apart and new oceanic flow is formed,” says Ivanov.

There are numerous rift systems around the world but the most active ones are the East African rift, Baikal rift, West Antarctic rift, Rio Grande rift, the Rhine Graben rift system in Europe and Shanxi rift system in China. When such geographical features become prominent enough they reshape the way the planet looks.

The rifts undergo massive geological changes—shoulders of rifts grow and get eroded by rain and melting snow. At the same time, the axial parts of rifts subside and get filled with sediments, which gets eroded from the shoulders. Rifting is associated with seismic activity, thus earthquakes are common in these areas.

Volcanism is very common in rift systems. This keeps the Earth’s interior in such regions busy. Rifts are the regions of extension of the crust and the lithosphere. “The extension may develop to a stage when two plates split apart, like in the example of the Red Sea and the Gulf of Aden. So continental rifts are potential places where new oceans are expected to form,” says Ivanov.

But continents form not just on the basis of intra continental rifts. To understand the bigger picture what is important is to look at oceanic rifts, which mark the divergent plate boundaries. Some examples are Atlantic Mid Ocean Rift, Indian Mid Ocean Rift and East Pacific Rise. These rifts are otherwise called ridges and in this particular case, rift and ridge are synonymous. With the all the ongoing activity inside the planet, a future Earth will look absolutely different from what it is today.

The article was first published in the Down To Earth print edition (dated 16-30 April, 2019)