THREE months after the country’s top science academies released their controversial report backing genetically modified (GM) crops and hastily withdrew it after it was panned by the scientific community, they are back with an updated report—and the verdict is that it is worse than the original.

Minister for Environment and Forests Jairam Ramesh and Planning Commission member K Kasturirangan had commissioned the academies to assess the safety and viability of growing GM crops in the wake of countrywide protests over the approval for Bt brinjal, the first GM food crop that would have been commercialised in India.

The report, first released in September 2010, became notorious for having plagiarised a paper written by a crop developer (see ‘Sham Science’, Down To Earth, October 16-31, 2010). It was also shoddy—there were no citations or references. Nor did it say who were consulted and how the report arrived at its conclusions. Ramesh had dismissed the 25-page report, saying “it does not appear to be the product of rigorous scientific evaluation”.

The updated report has been tidied up. There are references (119 of them) and a list of those who attended the June 1, 2010, meeting, the only one held to discuss this important issue. In addition, eight presentations that were made at the meeting have been put up on the INSA website but have not been annexed to the report. That’s as far as the changes go; the content remains more or less the same. Far from having redeemed themselves, the academies appear in even poorer light because the report is rife with “sweeping, unsubstantiated and superficial statements” according to many of the scientists that Down To Earth spoke to. Some described the new report as “juvenile and trivial”.

“For the most part, it is still onesided, strongly favouring vested interests and seed companies rather than accepting valid scientific, environmental and health considerations against Bt brinjal,” said P C Kesavan, distinguished fellow of the M S Swaminathan Research Foundation of Chennai.

“Many inconvenient references have either been omitted or explained away.” Kesavan was one of the 46 scientists present at the June 1 meeting, and he is scathing about the “scientific imprecision that characterises the report”. Here is one example from several that he cited from the report: “‘Hybrids of organisms contain genomes derived from both parents’.

Does it mean that pure line crops and breeds do not contain genomes derived from both parents? I wrote to the Academy but it has not responded.” Kesavan has a distinguished career including stints with the Bhabha Atomic Research Centre and the Jawaharlal Nehru University as the dean of its School of Life Sciences.

Amateur and amusing is how he dismissed the updated report, as did P M Bhargava, former director of the Centre of Cellular and Molecular Biology. “The revised report is even more hilarious, scientifically invalid and socially sterile than the original one,” according to Bhargava who is currently one of two experts nominated to the Genetic Engineering Approval Committee, now renamed the Genetic Engineering Appraisal Committee (GEAC). Among the many instances he cited from the report is the statement that “Chemically, however, all DNA are the same”. This is absurd and hilarious, said the noted scientist who added: “I would like to see anyone anywhere in the world defend that statement in the presence of even a group of scientists who are pro-GM.”

But such goof-ups apart, the import of the report remains unchanged: a clean chit for GM technology and a recommendation that Bt brinjal should be released commercially. This despite a series of reports by internationally renowned scientists showing significant flaws in the test data on Bt brinjal (see ‘Holes in risk analysis of Bt brinjal’, Down To Earth, October 16-31, 2010) submitted by crop developer Mahyco, a company part owned by the agriculture biotech giant Monsanto of the US. The academies have simply paid no heed to the serious concerns raised about Mahyco’s data that was supplied to Indian regulators.

Should one have expected a better, more balanced report? In September, soon after widespread criticism of the report, INSA president Mamannamama Vijayan, who is coordinating the interacademy exercise, had declared that although the report would be reviewed, “it is very unlikely that the recommendations will change”. Indeed, these have not, although some passages in praise of transgenic technology have been excised. S Krishnaswamy, president of the Tamil Nadu Science Forum, points out that even where biased statements from the earlier report have been expunged and replaced by a more balanced approach, the recommendations inexplicably remain the same.

A telling passage that was deleted is the following: “After a critical analysis, the Expert Committee II concluded that all the concerns raised by various persons /experts and organisations before and after the ‘Public Consultations’ have been adequately addressed. It is possible to add more and more tests for field assessment, but all the data generated so far confirm the safety and utility of Bt brinjal, especially considering the fact that his (sic) gene has been in use globally for over 15 years.” Apparently, a three-month reflection has changed this absolute view to a more nuanced tone in the updated report: “Thus a balanced approach is required, keeping in view and learning from the evolution of agriculture which sustains human life on earth, the present day knowledge, prevailing crop production practices and the need of food in the future.”

All the same, the recommendations relating to Bt brinjal remain in place. “The overwhelming view is that the available evidence has shown, adequately and beyond reasonable doubt, that Bt brinjal is safe for human consumption and that its environmental effects are negligible,” the academies declare while calling for its limited commercial release. “One would expect from the revised conclusion that there would be a revision in the recommendations. This just shows lack of sincerity,” alleged Krishnaswamy. It also reflects lack of clarity on the issue since many recommendations are contradictory (see ‘What are they recommending?’).

Bhargava’s point is if there was “overwhelming” support for GM crops as the report claims “why would 90 percent of the member-countries of the UN oppose them? And why would so many states in our country representing some half of the population and cutting across political affiliations, oppose Bt brinjal? And why would virtually the entire body of well-known scientists around the world who have no vested interest, be sounding a note of caution on GM crops?” According to him, there is a deliberate attempt to mislead by hiding facts.

The charge of bias comes up repeatedly. This could have a great deal to do with who among those present at the June 1 brainstorming session were leading the discussions and making the presentations, thinks Kavitha Kuruganti, convenor of the Alliance for Sustainable and Holistic Agriculture (ASHA), a network campaigning for an agriculture policy that is farmer-centric and not corporate-oriented. Eight presentations have been put up on the INSA website but four of these are from people involved closely in regulation of GM crops (see ‘Conflict of interest’).

“The presentations were not based on any scientific evidence cited; in a couple of cases, they consisted of a reiteration of the biosafety studies done on Bt brinjal and the conclusions of the crop developer and the regulators. In at least two presentations, industry data for GM crop adoption is used as evidence for bio-safety,” said Kuruganti who was earlier with the Centre for Sustainable Agriculture.

Suman Sahai, convenor, Gene Campaign, is forthright that the report is “juvenile, platitudinous, trivialises issues and makes fallacious arguments.” One such fallacy is that the yield of major food grain crops is reaching a plateau. “The genetic potential for yield of most crop varieties has not been realised because most small farmers are not able to apply adequate inputs to ‘extract’ the most out of the variety’s potential. For this reason, they will not get the potential out of a GM variety either,” pointed out Sahai. Gene Campaign is a research and advocacy organisation which works to empower communities to retain control over their genetic resources.

Krishnaswamy said there are many problems with the updated report, including the appropriateness of the citations. For instance, two references about benefits to farmers are based on data collected by Mahyco in 2002-03. Here is what the report claims: “It is, however, evident that the farmer could benefit due to improved yield, better protection against yield loss, premium for quality, reduction in pesticide, insecticide or fertilizer use...”. The reference is to a consumer survey done by IIM-Ahmedabad which says nothing about the farmer. Later, the report makes an even bigger claim: “A few studies conducted in developed as well as developing nations have shown net benefit to the farmer, but this may depend on the prevailing conditions (e.g. high infestation)”.

Krishnaswamy pointed out there is no analysis with respect to infestation as mentioned. Nor, shockingly, does the data refer to any country apart from India. “More importantly, the papers cited make a case for further data collection and research in order to ascertain if there is truly a benefit for farmers. They also raise the question of sustainability even if there is a likely benefit.” With analysts pointing out the report’s propensity to hide facts and use partial truths to make a case for GM crops, Indian science has not been served well with a report that lacks balance, rigour and depth. Kesavan believes there is a clear need for a forum to critically evaluate the updated document.

Ironically, the INSA website carries an article published in Nature by Andy Stirling, research director and head of the Centre for Social, Technological & Environmental Pathways to Sustainability at Sussex University. The essence of the article is: “When knowledge is uncertain, experts should avoid pressures to simplify their advice. Render decision-makers accountable for their decisions.” If only the top scientists who prepared the update had followed Stirling’s dictum. 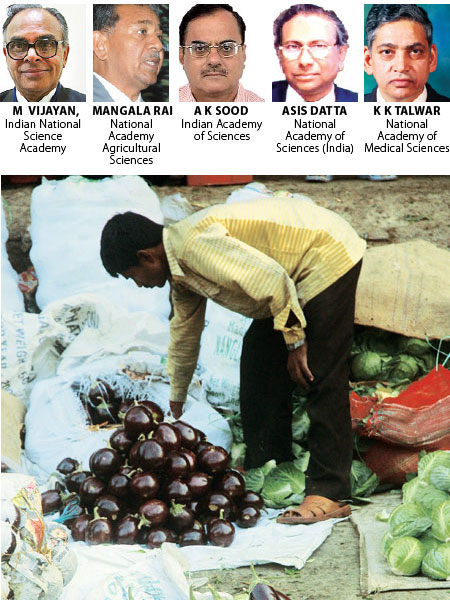