Call to replace oral vaccines with injectable ones triggers debate 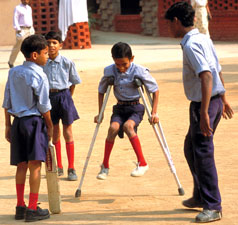 It was on April 12, 1955 that the success of the first polio vaccine developed by Jonas Salk was announced to the world. Fifty-nine years on, hundreds of scientists and doctors marked the occasion by issuing a declaration, calling for eradicating polio completely and emphasising the need for further investment on vaccination programmes globally.

The declaration talks about endorsing a new strategy to secure a permanent polio-free world by 2018. It also sets a timeframe to phase out use of oral polio vaccines or OPV (comprising a weakened strain of the wild virus) and introduce inactivated polio vaccines or IPV (consisting of the killed wild virus).

The signatories to the declaration, numbering over 400, urged governments, international organisations and civil society to do their bit to end polio. The declaration calls for full funding and implementation of “Polio Eradication and Endgame Strategic Plan 2013-2018”, developed by the Global Polio Eradication Initiative (GPEI). With polio cases at an all-time low and the disease remaining endemic in just three countries, GPEI estimates that ending the disease entirely by 2018 can be achieved at a cost of approximately $5.5 billion.

The declaration notes that the world has a “unique window of opportunity” to eradicate polio. Only 223 new cases due to wild polio virus were recorded in 2012, which is more than a 99 per cent decrease from the estimated 350,000 cases in 1988.

Only, 16 new cases have been reported so far this year (as of April 9). India has not recorded a case in more than two years, which is an achievement, it is claimed.

Commenting on the declaration, Anant Phadke who is associated with Jan Swasthya Abhiyan, a network of people’s organisations, said that complete eradication of polio cannot be achieved through oral vaccines. The country needs to shift from OPV to IPV, he said.

Other experts disagree; they say that India cannot achieve complete eradication using IPV. Jacob Puliyel, head of paediatrics department at St Stephens Hospital in Delhi, said IPV is effective in polio prevention and is less likely to result in vaccine-derived polio as sometimes happens with the oral polio vaccine. But he cautioned that IPV is several times more expensive than oral vaccine and coverage with the injectable vaccine may be no better than the coverage of DPT (injectable three-in-one vaccine for diphtheria, tetanus and pertussis) which is 55 per cent. He said if oral vaccine is withdrawn, it will result in a large number of children remaining unimmunized, and that there would be a real risk of epidemic polio. He added that it would be better if IPV and oral vaccine programmes run side by side. “They are talking about phasing out oral vaccine, which would be problematic for the country,” he said.

The World Health Organisation (WHO), which is now talking about the IPV’s importance, had once restrained developing countries from adopting it in their vaccination programme. Realising the importance of IPV in its vaccination programme, India decided that OPV would be used for the time being and simultaneously expertise will be developed for IPV. The year 1991 was fixed as the deadline to achieve this, and work was initiated in collaboration with France. However, WHO asked manufacturing industry of IPV to not provide it for immunisation programmes of developing countries, unless the efficacy of the same was established.