Closer scrutiny by NGO Centre for Science and Environment, however, shows the process is not quite as CO2 emission-free as claimed

Early in May, researchers at the Massachusetts Institute of Technology (MIT) announced the discovery of a new method of producing steel that is free of CO2 emissions. The process, known as molten oxide electrolysis (MOE), was initially employed to generate oxygen. The product generated was oxygen and, astonishingly, steel.

Given the emission-intensive nature of conventional steel production, this announcement by material chemist Donald Sadoway and fellow researchers at MIT brought some hope to the industry. The report on the study details the working of MOE, a process which uses electricity as a means of breaking down iron oxide (key raw material) into its metal form and releasing oxygen. Very pure steel was produced as an unintentional by-product of the process, without any CO2 generation.

Conventional steel-making route involves heating iron oxide in a furnace along with coke at temperatures ranging from 900°C to 1,300°C and producing hot metal with impurities such as carbon and trace amounts of sulphur, and huge amounts of CO2. MOE (see 'Molten oxide electrolysis' process), however, works at 1,600°C, produces pure carbon-free steel and zero CO2 emission. Like any other electrolysis process, MOE consists of two oppositely charged plates—electrodes—immersed in a solution containing iron oxide along with other metal oxides—electrolyte. Electricity is passed through these electrodes into the electrolyte and the end product is molten iron, which collects on the negatively charged electrode and oxygen is released from the positive electrode. Since the purpose of the study, funded by the National Aeronautics and Space Administration (NASA), was to generate oxygen using lunar soil to be used in possible future human bases on the moon, the process was performed on lunar-like soil, rich in iron oxide, extracted from the Meteor Crater in Arizona. 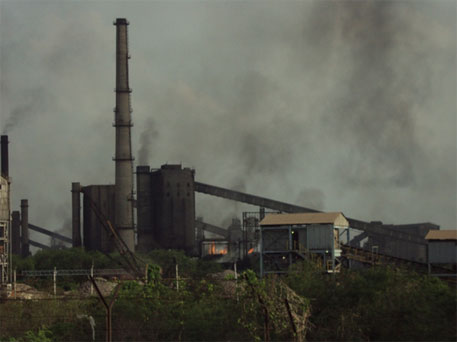 Being an electricity-intensive process, MOE consumes approximately 3,500 units of electricity to produce one tonne of steel. This electricity was supplied from a carbon-free source (possibly a renewable source) and had an emission factor (ratio between the amount of carbon dioxide produced and the amount of raw material processed) of 0.09 kg of CO2 per unit of electricity generated (kWh). Total CO2 generated was 0.315 tonne CO2 per tonne of steel, a five-fold decrease from the current conventional steel-making process. 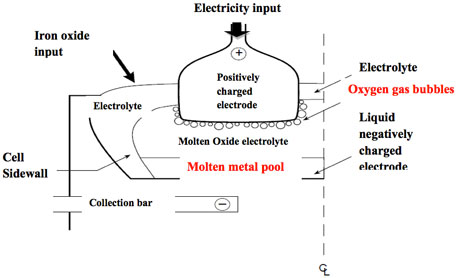 The problem with carbon-free electricity

But what about the source of this electricity? Are CO2 emissions generated at the source accounted for? “The CO2 emissions considered in the study have to be from a renewable source. Otherwise the emission factor cannot be this low,” says D K Ambasta, deputy general manager (steel making shop ) of Metallurgical & Engineering Consultants ( India ) Limited (MECON), a public sector undertaking.

So at this emission factor and consumption of 3,500 units of power for steel production using MOE, total CO2 emitted works out to be 3.3 tonne CO2 per tonne of steel ( tCO2/ts). USA’s fuel mix for electricity generation is reflected in its emission factor – 0.53 kg CO2/kWh, which is nearly half of that of India. At this factor, 1.8 tonne of CO2 will be generated for every tonne of steel produced using MOE (further explained in table below: 'CO2 emissions generated and energy consumed for 3,500 units of MOE').

CO2 emissions aside, even the cost of electricity is a crucial parameter when judging the economic viability of such a process in the Indian context. Even though the expenditure on equipment may not be too high, the running cost of the process will be tremendous. “The process will not be cost-effective,” says Ambasta. “The capital spent on equipment may be lower than the equipment expenditure in the normal steel-making route, but the electricity cost, especially in India, will be too high. And electrolysis consumes very high amounts of electricity, " he adds.
Sadoway claims that MOE will make “production of a few hundred thousand tonnes of steel equally viable”.  But the high operational cost due to the large amount of electricity consumed, will make MOE an unfeasible option for small-scale Indian industries.

It then becomes clear that the process is not quite free of CO2 emissions if one factors in the source of electricity, and that it is not cost-effective. Another aspect of the process that has been overlooked is the energy consumed in the process. Consider the amount of electricity consumed to produce one tonne of steel: 3,500 units of electricity translates into about 3.01  Gcal/ts of energy consumed (Giga Calorie is a unit of heat energy, 1 kWh = 0.00086 Gcal) at the source of generation (solar PV/thermal, wind farm, hydro power dam and so on) for renewable sources. The key input for any of these sources is either wind, water, sunlight or biomass.

Coal is the key raw material for coal-based thermal electricity. Nearly 0.7 kg of coal is consumed per unit of electricity in India. Taking average Gross Calorific Value ( GCV, heat released upon burning of a unit of coal) of Indian coal as 3,500 kcal/kg, the specific primary energy works out to be 8.5 Gcal consumed in terms of coal at the source of generation, for each tonne of steel produced (explained in table 'Total CO2 emissions generated and energy consumed for 3,500 units of MOE'). Graph 1 displays the specific energy consumption and CO2 emission by the coal-based conventional steel-making route and MOE. 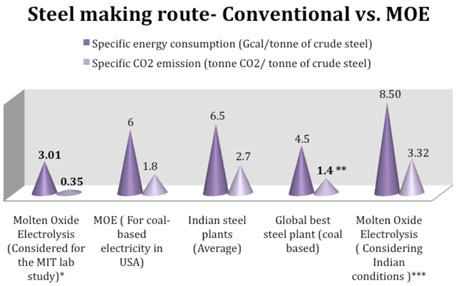 So given the Indian conditions, unless the source of electricity is renewable in nature, on an average, the process will consume 2 Gcal more energy, will emit 0.6 tonne more of CO2 and maybe each tonne of steel produced will also cost more as compared to the steel produced by conventional method.

Does the new steel-making process then still qualify as “green” and carbon-free? And this scenario isn’t limited to India. It is equally applicable to other developing countries with high emission factors and a large share of coal-based power in its electricity mix.

“If there is no carbon being introduced in the process, how is the steel being formed? In this case (MOE), the iron is forming an alloy with another element besides carbon and producing a different class of steel from the conventional steel making process.” says I Chattaraj, scientist, National Metallurgical Laboratory (NML).

Ready availability of material for electrode-making is an important factor. The process makes use of elements such as molybdenum for its negative electrode and chromium-aluminum alloy for its positive electrode. Molybdenum reserves are scarce in India and aluminum extraction is an extremely energy intensive process, requiring more than six times the energy consumed for steel production.

The American Iron and Steel Institute (AISI) has already declared MOE as one of the probable technologies to reduce CO2 emissions from Iron and Steel industry, but has AISI taken other factors into consideration?

The process is on to its next leg of development: scaling up the current production level to the industrial scale. It is expected to be ready for pilot-level testing in the next two to three years. MOE is a step in the right direction once renewable becomes mainstream. That is, when renewable energy is able to replace coal.