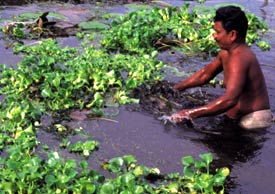 researchers from Kerala-based College of Agriculture have found that the fungus Fusarium pallidoroseum is useful in controlling water hyacinth -- a weed that grows rapidly and chokes waterbodies. It is estimated that 200,000 hectares of water surface in the country is covered by it. Because of the enormity of the problem, extensive research has been conducted to find a suitable biocontrol agent to prevent the reproduction of the weed.

Under natural conditions, F pallidoroseum wilts water hyacinth, as a result of which the plant sinks to the bottom of the waterbody. This restricts its reproduction to a great extent.

To boost up this process, the group prepared a 'powder' from the fungal spores (reproductive cells). This was sprayed on the hyacinth along with cashew nut shell liquid (cnsl), a product of plant origin. Trials were conducted in glasshouse, troughs and an infested lake. The results were encouraging. Under glasshouse conditions, for instance, a spray of the fungal power solution along with cnsl was able to destroy 97.78 per cent of the weed present (Current Science, Vol 86, No 6, March 25, 2004).

The researchers even tested the fungus for its harmful affects on biodiversity if it escapes from the treated waterbody. Tests were conducted on 54 weed species and 53 species of 'cultivated vegetation', such as vegetables, oil seeds, fruits and trees. The fungus was found to be 'pathogenic' for 20 weeds and six plants -- amaranthus, tomato, banana, cashew, colocasia and papaya. But the affects were not very adverse -- only isolated spots on older leaves were observed.