Pathogenic viruses can jump between a range of species; pose threat to reptiles, too 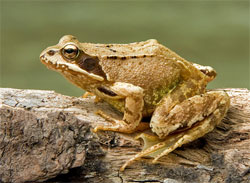 A number of viruses have been found in northern Spain that are killing frogs, toads and newt species on a mass scale, according to a study published in Current Biology.

The viruses belong to the Ranavirus group, which are double-stranded DNA viruses from the family of Iridoviridae.  These pathogens have wide geographical and host ranges, says the study.

BBC News has quoted the lead author of the article, Stephen Price from University College London, as saying the lineage of the viruses was not known until the outbreaks.  "But since these die-offs began, we've started to see them elsewhere - in China in giant salamanders, and it looks like they are emerging in places like France and the Netherlands as well," The virus was implicated in deaths of more than 1,000 newts and frogs in the Netherlands in 2010, infected bullfrogs in Belgium, and more recent deaths in France.

Dead amphibians were first spotted in the Picos de Europa National Park, in Spain, in 2005. With help from Jaime Bosch of the National Museum of Natural Sciences in Madrid, park biologists have kept close tabs on six common species of amphibians that live there.

Two of the viruses, called CMTV-like Ranaviruses, were infecting large numbers of animals. They can jump between a range of species. They infect and cause disease in fish and reptiles, but are noted for their ability to cause lethal disease in amphibians in the Americas, Europe, Asia, and Australia, according to the study.

The research was carried out by scientists at UCL, the Zoological Society of London, Queen Mary University of London, the Museum of Natural Science in Madrid, and the Picos de Europa National Park.

Collapse of amphibian communities due to an introduced Ranavirus