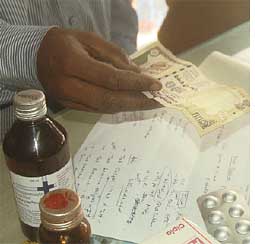 Patent bill may be pushed through Parliament without debate

THE Ministry of Science and Technology has introduced a bill in the Parliament that may make life-saving drugs unaffordable for poor people. The bill gives scientists and researchers in government-funded universities the right to patent innovations and research outcomes. This includes medical research and patenting drug formulas would affect drug prices.

The legislation titled The Protection and Utilization of Public Funded Intellectual Property Bill 2008, was introduced in the winter session of Parliament ending December 7. On December 18, 2008, the Rajya Sabha chairperson referred the bill to the Standing Committee on Science and Technology, Environment and Forests.

V Maitreyan, chairperson of the committee said the ministry officials presented their case on January 27 but the decision on the bill would be taken after elections.D Raja, a committee member, said the bill might be pushed through without considering the standing committee's recommendations.

The bill is modelled on the US Bayh Dole Act that has been criticized for commercializing research funded with public money and denying the public the benefits of such research.

The Indian version of the Bayh Dole will boost commercialization of research and transfer patent rights, currently vested with the government, directly to the researchers (see 'Proposed IPR law raises concerns', Down To Earth, April 1-15, 2007).

"The bill has the potential to reduce access to the outputs of publicly funded research while harming future innovation," said a white paper on the bill published online by US-based students advocacy group--Universities Allied for Essential Medicines (uaem). The study said the Indian bill includes fewer safeguards for preserving public access.

Public interest groups have repeatedly sought debate on the bill that was kept under wraps from the beginning in 2007 when the first draft was being made. "Our attempts to get the ministry to hold public consultations on the bill has gone unheeded," said Kajal Bharadwaj, a lawyer activist.

The bill includes new plant varieties, new drug formula, trademarks and designs within the definition of "intellectual property" that can be patented. "This may deprive the farmers rights to sell or share new plant varieties," said Rajeshwari Raina, senior fellow with the social science research institute, Centre for Policy Research.

She said inclusion of new plant varieties could be a back door entry to the International Union for Protection of New Varieties of Plants that says only plant breeders or creators of new plant varieties will have rights over these varieties. In such a scenario farmers would not benefit from government funded research to develop disease resistant and drought resistant crops.