A REPORT commissioned by the Union environment and forests ministry warns the Centre against going ahead with 24 hydropower projects planned on the Alaknanda and Bhagirathi river systems in Uttarakhand. The projects would destroy 22 per cent of the state’s forestland and affect the unique Himalayan ecology along one-third of lengths of the two main tributaries of the Ganga, states the report prepared by the Wildlife Institute of India (WII), Dehradun.

The ministry, in 2010, had asked WII to assess cumulative impact of hydropower projects on the biodiversity of the Himalayan state. WII studied 70 projects, both under construction and proposed, and found that 24 of the 39 proposed projects would significantly affect critically important habitats in the Alaknanda and Bhagirathi basins. The region supports a large number of rare, endemic and threatened (RET) species. 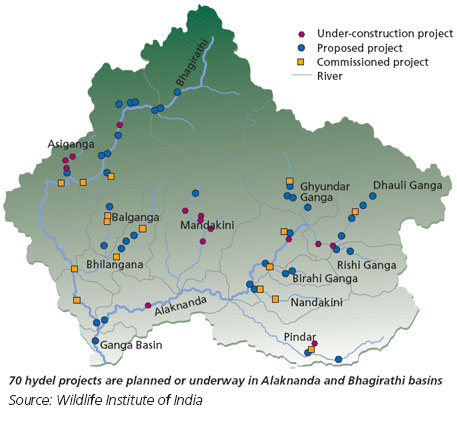 “We have recommended maintaining seasonal flow in the rivers for conservation of aquatic biodiversity,” says V B Mathur, dean of WII and coordinator of the study. “We have lost rich biodiversity of Uttarakhand due to big dam projects like Tehri on the Bhagirathi. There is a need to be extra cautious.” To offset the losses due to 31 under-construction projects, the report recommends establishing two conservation reserves for aquatic biodiversity.

To recover the loss of power generation due to scrapping of the 24 hydropower projects, Mathur suggests reducing loss of power during transmission. The 70 projects underway in Uttarakhand are expected to generate 9,563 MW. Scrapping the 24 projects would reduce power generation by 27 per cent, Mathur says. At present power transmission losses in the country are between 30 and 40 per cent. Reducing it to the global average of 15 per cent can help save the power, he adds.

Surprisingly, though WII had submitted the report in March, the environment ministry put it up on its website on April 16, just a day before the National Ganga River Basin Authority (NGRBA) met to discuss ways to ensure uninterrupted flow of water in the holy river. Analysts say the timing is significant because the ministry can claim to have made the study public before the meeting, but no one would be able to go through the report to raise the concerns highlighted in the report before NGRBA.

Himanshu Thakkar of South Asian Network on Dams, Rivers and People points out problems with the report. It underestimates the number of hydel projects on the anvil in the state. Those which have been given a miss include commissioned projects like the 144 MW Chilla dam and proposed projects like 745 MW Utyasu dam on the Alaknanda.

Besides, the report ignores the human need while calculating e-flow in the rivers. E-flow is defined as the quantity, quality and timing of water flow required to sustain riverine ecosystems and the livelihoods and well-being of people who depend on these ecosystems. This is a huge omission and needs to corrected as it affects the cumulative impact of the projects, he adds. The report also misses aesthetic, cultural, spiritual and religious values associated with the Ganga and protected status of the Bhagirathi. The impact of sedimentation on biodiversity and geomorphology have also been given a miss in the WII report. Thakkar, however, hails the report for recommending regular environmental audits for commissioned projects to identify areas of negligence in environmental management. “But it is an open secret that the environment ministry has neither the will nor the ability to do this,” he adds.

WII recommendations can help save the fragile ecology of the Alaknanda and Bhagirathi basins, but activists have little hope. Past experience shows that the ministry is insensitive to such strong recommendations (see ‘Cleared at cost of biodiversity’, January 16-31, 2012). Despite commissioning the studies, the ministry often prefers ignoring their recommendations.