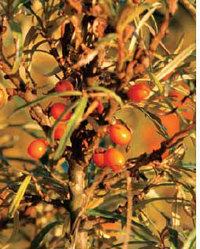 sea buckthorn, a shrub found in the cold desert regions of Himachal Pradesh and Jammu and Kashmir, is well-known as a storehouse of vitamins and for its cholesterol busting properties. The plant has been now been found to work wonders for the liver too. Its anti-oxidant rich leaves may ward off liver ailments--like jaundice that has no treatment--says a new research conducted by Defence Institute of Physiology and Allied Sciences, Delhi.

It can be used as a supplement by people suffering from such ailments, the researchers said. For the study, they pretreated a group of rats with different doses of the leaf extract and administered carbon tetrachloride, a liver damaging agent. They found that the group that was administered only carbon tetrachloride sustained significant liver damages, while the one that had received the berry's leaves did not, the researchers said in the paper that will be published in the Journal of the Science of Food and Agriculture.

This is the first time that the leaves have been shown to have medicinal properties, similar to that of the berries. "The potential is immense but further studies need to be carried out," says Virendra Singh who researches on sea buckthorn at the Himachal Pradesh Agricultural University, Palampur. He adds, "Flavonoids, the main antioxidant found in the leaves, are phenolic compounds. These can also be used to treat cardiovascular diseases in the long run."

India is the fifth largest sea buckthorn producer in the world after China, Russia, Kazakhstan and Mongolia. The berries grow on about 11,500 hectares (ha) in Ladakh, and about 400 ha in Himachal Pradesh. "The sea buckthorn (Hippophae rhamnoides) berries also help in soil and water conservation, desertification control, land reclamation, erosion and water loss control and reforestation. They are also known for efficient nitrogen fixation," says Tsering Stobdan, scientist at the Defence Institute of High Altitude Research in Ladakh. The institute has worked on the plant since 1992.

Stobdan adds that sea buckthorn's economic potential needs to be exploited further. "Sea buckthorn berries worth Rs 1.4 crore was sold in 2007. This is less than 5 per cent of the region's total potential," he adds.