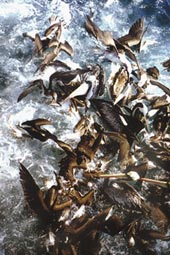 in the late 19th century, tens of millions of marine birds living in the 'bird islands of Peru' became famous across the world. This was not only due to their visual appeal, but also because they were considered economically important as producers of guano -- droppings that Peru exported as fertiliser. Unfortunately, in the last 40 years, the population of these birds has declined dramatically, shows a study published the journal Fisheries Oceanography. Their decline is due to commercial fishing, which has affected the availability of their favourite food, the anchovy fish.

The study was conducted by researchers from us-based University of California with the help of a new computer model. The model simulates a marine ecosystem taking into account factors such as wind strength and human influences. "We saw a very different system before and after the fishing," says Jaime Jahncke, one of the researchers.

The Peruvian anchovy fishery, world's largest single-species commercial fishing, increased significantly during the 1950s. As per the findings, wind forces in the early part of the 20th century caused a significant rise in the nutrient supply off the Peruvian coast and thereby led to a boom in the anchovy population. With more food available, the numbers of guano-producing seabirds, including cormorants, boobies and pelicans, increased during 1925-55. But in the decades that followed, the bird populations declined. The decrease, the authors note, appears to be due to the depletion of their food by the fishery -- 85 per cent of the prey otherwise available to the seabirds was being caught. The latter half of the 20th century saw a dramatic decline in the seabird population, from about 20 million to about five million. Today, many of the so-called bird islands of Peru are devoid of the seabirds.

According to the researchers, a reversal is possible. "But for this, it is a must to comprehensively understand the causes of the population changes and then accordingly form policies to manage them," they conclude.