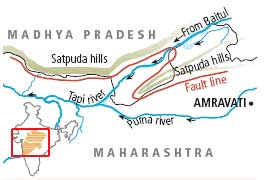 THE Madhya Pradesh and Maharashtra governments recently sanctioned a novel scheme to replenish groundwater in six districts of the two states. The plan involves directing water from the Tapi river into a 25 km-wide seismic fault-line that runs between the river and the Satpura mountain chain.

The water resources ministers of the two states asked the Tapi Irrigation Development Corporation (tidc) to prepare the detailed project report for what is called the largest groundwater recharge project in Asia. The project is likely to raise water level in 800,000 hectares (ha) of land. The authorities chose the project over an earlier proposal to construct a mega-dam that would have submerged 19,000 ha of fertile land including 6,000 ha forestland and displaced 65,000 people in 73 villages.

V B Patil, executive engineer with tidcs design development unit, said the project is the result of a study by the Central Ground Water Board (cgwb) that indicated that the rocks inside the 250-km-long, 300-metre-deep, fault-line, would allow filtration of water.

S K Jain, the cgwb scientist who conducted the study, said the pilot project in Yawal tehsil of Jalgaon district was encouraging. Under it, recharge structures were built in a 237 sq km area containing three different geomorphic strata endemic to Tapi basinhilly hard rock strata (found mainly near the hills), bouldery zone that allows vertical filtration of water and alluvial zone with a clay layer underneath (found near the river). It was during the survey for this project, the fault-line with underground recharge capacity of 400 million cubic metres (mcm) was discovered. The annual rain runoff of 13 mcm was not sufficient to make a significant difference in the water table. It was then the irrigation department hit on the idea of diverting the excess runoff from the Tapi river into it, said Jain.

An estimated 100,000 mcm runoff from the Tapi will be diverted from near its origin in Betul (Madhya Pradesh) and in Amravati district (Maharashtra) through flood channels. The Yawla experiment (1997-1999) increased the water table by five metres.