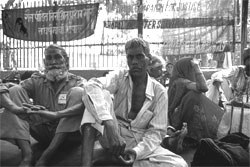 the victims of the Bhopal gas tragedy --the world's worst industrial disaster --feel they have been shortchanged yet again. The recent turn of events in their protracted fight for justice may have, in fact, shattered their last hopes.

Survivors and activists allege that the Central Bureau of Investigation (cbi) has asked for the watering down of charges against Warren Anderson, the chief executive officer (ceo) of ucc at the time when the gas tragedy occurred in 1984, from 'culpable homicide amounting to murder' to 'negligence'. The investigating agency, however, denies this.

"This will ensure that Anderson is never extradited. Whereas culpable homicide draws a penalty of imprisonment for 10 years and a fine, negligence carries only two years of imprisonment," says Nityanand Jayaraman of CorpWatch India, a non-governmental organisation working in the field of corporate environmental performance.

On their part cbi officials contend that they have not asked for the dilution of charges. "Against a plea for dilution of charges by 11 out of the 12 accused, the Supreme Court had ordered in 1996 that the charges be changed from 304 (culpable homicide amounting to murder) to 304 A (negligence). So when we applied for a warrant against Anderson (the only accused in India) it was filed under 304 A as per the Supreme Court order," clarifies cbi Spokesperson S M Khan.

To fight the injustice meted out to them, the gas victims along with several activist groups like Gas Peedit Nirashrit Morcha, Bhopal Gas Peedit Mahila Karamchari Sangh, Bhopal Group for Information and Action, and National Campaign for Justice in Bhopal -- staged a dharna in New Delhi.

The victims and their families feel further let down by the reported move to distribute the remaining compensation legally meant for them among the residents of 20 municipal wards in Bhopal, who were part of the study on those unaffected by the gas tragedy.