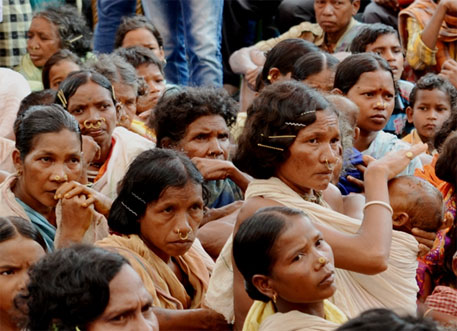 The first palli sabha or village council meeting to decide the fate of mining in Niyamgiri was held at Serkapadi village in Rayagada district. Its verdict was unequivocal and resounding. Thirty-eight of the 46 adult members of the forest village present at the meeting spoke one after the other, rejecting the proposed bauxite mining in the Niyamgiri hill ranges.

“For hundreds and thousands of years the Niyamgiri range is ours protected by our ista debata (principal deity) Niyamraja. You may come with guns but we won’t give away any portion of the hills,” said a young and emotional Pandu Jakesika, holding the mike for the first time in his life. The Palli Sabha took place under the supervision of a district Judge with a heavy presence of central paramilitary and state police forces.

Serkapadi is one of the 12 hill slope villages selected by the Odisha state government to take a decision on the proposed bauxite mining by a joint venture of Orissa Mining Corporation limited (OMCL) and Sterlite Industries, the Indian arm of the London Stock Exchange-listed metals and mining giant Vedanta Aluminium Limited. The Supreme Court on April 18 this year ruled that villagers will take a decision if mining will infringe the cultural and religious rights of the forest dwellers over the Niyamgiri hill ranges.

The meeting started at at 11 am this morning amid tight security. By 9 am the central paramilitary and the state police reached the village. A team of the state police’s bomb squad checked the village and the venue for any explosives while armed policemen took positions on the way to and around the hills.

Forest dwellers from far away Dongria Kondh villages, like Jarpa, Khambesi and Lakhpadar, walked between three to four hours to reach the venue of the palli sabha. They sat outside the open venue guarded with bamboos and cheered after each of their fellow tribe member made their point on the mike. 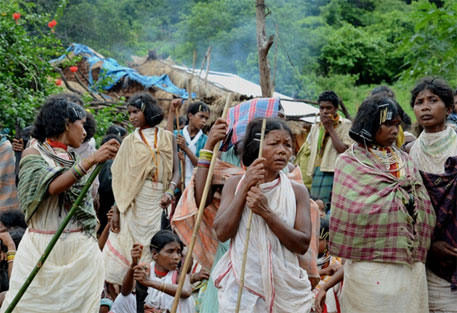 At the beginning, villagers demanded that proceedings be carried out in their local tribal language Kui instead of Oriya. A local tribal was assigned the translators job.

After all the 38 members of the village repeated their rejection of the mining proposal, the minutes of the meeting were read out. An altercation ensued. The Dongria Kondh demanded that the verification report delineating their traditional boundaries and settling community rights to the forests be rejected. “We don’t want an acre here or some decimals there. The entire forests and hills are ours. You cannot draw a map and limit us inside a small patch,” they argued with the district judge, who was present as an observer representing Supreme Court.

Under the Forest Rights Acts, 2006, the state government hurriedly settled villagers’ community rights to the forests, in 20 small patches in Serkapadi, for instance, ranging between 0.01 acre for a village deity to 16.7 acre (one acre equals 0.4 hectare) for a patch of shift and burn cultivation.

The forest dwellers demanded that the entire Niyamgiri hills including the proposed mining site of Niyam Dongar be included as part of their community and religious rights. They signed only after this was included in the minutes of the meeting. The next palli sabha is scheduled on July 22 at the neighbouring Kesarpadi village of Rayagada district.