THE Supreme Court has temporarily stayed an order of the Madras High Court, asking resort owners near Mudumalai Tiger Reserve in Tamil Nadu to vacate the land. In April, the high court had given resort owners three months to hand over the land with them to the state to pave the way for an elephant corridor in the Nilgiri mountains. The corridor would connect Mudumalai to the Sathyamangalam forests in the east of the Segur plateau.

The apex court ordered the two-month stay on July 22 while hearing a petition filed by the owners of about 50 resorts. The owners had moved court following the high court’s order (see ‘SC stays order evicting resorts near Mudumalai sanctuary’, July 27, 2011).

The apex court will hear the case again in September.

The owners say the resorts do not fall in the corridor area. N Mohan Raj, project coordinator for Nilgiris landscape with WWF-India, counters the claim. “There is proof of elephants using the area. The resorts use eight feet-high electric fences to keep away the elephants,” he says. Refuting claims of presence of elephants, Rohan Mathias, one of the resort owners, says, “We are for conservation and wildlife tourism. Presence of elephants will be positive for our business.” 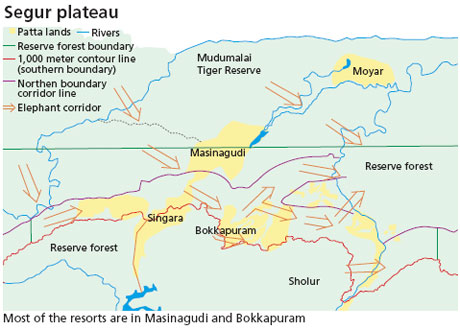 Studies say there are several elephant corridors in the Nilgiris. To secure them, the state planned to buy 208.5 hectares (ha) of patta land scattered between human settlements in 2009. The high court approved this plan but directed the state to get public feedback first. Despite protests by resort owners and people living on the fringes of the park, a map was published in 2010 showing one consolidated corridor. The area to be acquired worked out to 2,800 ha, of which 800 ha is privately owned land and the rest is revenue land.

The jump in the area to be acquired from 208.5 ha to 2,800 ha has not been justified with any scientific data. “Having the entire area as a corridor would be ideal but perhaps unnecessary,” says a wildlife biologist who wishes to remain anonymous. Due to the declaration of the Mudumalai National Park as a tiger reserve in 2007 and because of the corridor, the residents were forced to switch to the tourism industry from agriculture and other related activities. K Sudheesh, resident of Masinagudi village, parts of which fall within the corridor, says, “About 400 families out of 3,000 families here depend on the tourism industry now.”