Sex-ratio gap on a constant high 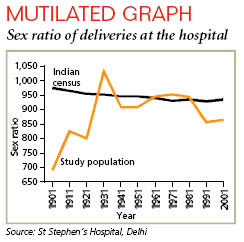 census data attributes the falling sex ratio in India to the use of ultrasound tests. But three factors--foeticide, infanticide and death in childhood due to neglect--contribute to the decline of the sex ratio reported by the census.

Researchers suggest data gathered from hospitals would help better understand the effects of prenatal diagnostic methods. "These factors will not be revealed in census," says Neeraj Verma, one of the researchers from Delhi's St Stephen's Hospital, where the study was carried out.

The Pre-natal Diagnostic Techniques (Regulation and Prevention of Misuse) Act, 1994, made foetal sex determination and selective abortion illegal. Diagnostic centres used to reveal the foetus' sex to parents earlier and the Medical Termination of Pregnancy Act of 1971 aided abortion of the female foetus.

An analysis of records from St Stephen's Hospital shows despite the 1994 act, sex ratio did not improve in 2005. Researchers say the study is not representative since two-thirds of India's babies are born outside hospitals. The study was presented at the International Conference on Global Health in Washington on May 29.