Proposed legislation seeks to bring plant, animal and marine protection under one authority 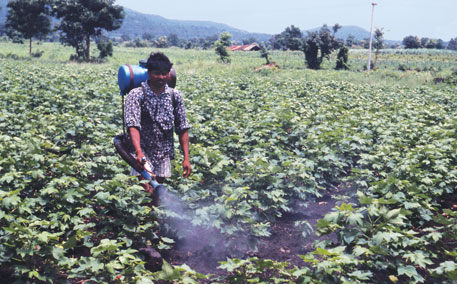 Union agriculture minister Sharad Pawar on Monday introduced the Agricultural Biosecurity Bill of 2013 in Lok Sabha, which is meant to  safeguard the country’s agricultural economy.

The proposed legislation provides establishment of an authority for prevention, control, eradication and management of pests and diseases of plants and animals and unwanted organisms for ensuring agricultural biosecurity. It will also help India meet international obligations for enabling import and export of plants, plant products, animals, animal products, aquatic organisms and regulation of agriculturally important micro organisms.

A press statement issued by the ministry after the Bill was introduced said the proposed legislation seeks to bring together plant, animal and marine protection and quarantine setups under a high powered body—an Agricultural Biosecurity Authority. The authority will enjoy adequate powers and its mandate would cover four sectors—plant health, animal health, living aquatic resources and agriculturally important micro-organisms.

The ministry stated that liberalisation of global trade in agriculture has opened new avenues for growth and diversification of agriculture, but that it has also brought in many challenges. There is an increased risk of introduction of exotic pests and weeds in the country with a potential to cause serious economic losses.

Moreover, climate change has also enabled pests to alter their habitats and new pests are getting introduced. The spread of trans-boundary diseases such as the avian influenza and the Ug-99 wheat stem rust fungus pose new threats to human, animal and plant safety.

Apart from all these reasons, advances in genetic engineering, leading to the introduction and release of living modified organisms or their products (genetically modified organisms, for example) is another challenge which requires proper risk assessment and management. Thus the authority will help to regulate them.

A number of plant diseases, animal diseases, marine diseases and pests have been introduced in India through import of seeds, planting material, livestock and livestock products previously. Many of them, including weeds such as Parthenium, Phalaris minor and Lanatana camara, have got established in the country and continue to cause enormous economic losses every year.

The press release said that systems have been developed and put in place over the years for separately protecting plant, animal and marine health, but the emerging challenges that have been highlighted makes agricultural biosecurity an urgent issue. This requires policies and technological capabilities to prevent, detect, and respond to such threats. Thus an integrated approach towards agricultural biosecurity would help to protect human health, agricultural production and livelihood, safeguard the environment, and protect against uncertain technologies and products. It will also equip the country to meet obligations under international trade and sanitary and phyto-sanitary agreements in food and agricultural products.

Though for achieving agricultural biosecurity, expertise from various organisations under the various ministries would be taken, but an autonomous authority will be required to administer this biosecurity. Such an authority would improve safety, efficiency, transparency and compliance of quarantine and pest management regulations and respond swiftly to contain emergent biosecurity problems. It will also ensure conduct of biosecure international trade in agriculture, the ministry says.