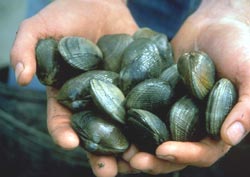 water -- where life began -- has today become a source of cure for many life-threatening diseases. Trawling through deep seas, scientists have been unlocking a treasure chest of drug resources, and the latest to be hauled up are bivalves -- soft-bodied animals that are protected by two hard shells hinged together. These organisms include clams, cockles, mussels and oysters. Researchers from Goa-based National Institute of Oceanography (nio) have recently discovered that viral diseases such as common flu can be cured using these.

Experiments carried out in Russia have also proved that the Russian blue mussel bivalve has the potential to cure influenza in mice. Furthermore, during preliminary studies conducted earlier, the nio researchers had discovered that the Indian green mussel bivalve (Perna viridis) was quite effective in curing a variety of diseases such as herpes, hepatitis and respiratory disorders. They have now taken their work a step further by studying the efficacy of a large number of bivalves against two influenza viruses.

The researchers studied the Indian green mussel, the estuarine oyster (Crassostrea madrasensis), the giant oyster (Crassostrea gryphoides) and three types of clams (Meretrix casta, Polymesoda erosa, Villorita cyprinoides). The medicinal extract was prepared from their meat and mantle fluid using a special process developed by the researchers, which involves subjecting the material to a temperature of 100 c for 20 hours. The antiviral efficacy of the extract was tested using chicken embryos both in vitro and in vivo by researchers from Russia-based Pasteur Institute of Epidemiology and Microbiology.

During the in vitro studies, the viruses were exposed to the extract and then their ability to infect red blood cells (rbcs) of chicken embryos was evaluated. The researchers found that the extract of Indian green mussel was most effective in reducing the infectious activity of both the viruses, followed by estuarine oyster and giant oyster. For the in vivo studies, the viruses were treated with the extract before being injected into the embryos. After three days, a fluid was extracted from the embryos, which contained the virus. This fluid was then exposed to rbcs of some other chicken to see whether it could infect these rbcs. The researchers discovered that viruses treated with the extract of black clam and mud clam could infect the least number of rbcs.

The researchers attribute the antiviral activity of the bivalves to the presence of a large number of human pathogens in the environment. "The bivalves develop antibodies against pathogens," says Anil Chatterji, one of the nio researchers. They are now trying to synthesise the antiviral ingredient of the bivalves in their laboratory. This would help in developing cheaper drugs. "Though extracting the active ingredient is cost-effective, synthetically manufacturing it would make the drugs much more cheaper," says Chatterji.
Bivalves are not the only marine organisms that can be used for curing diseases. Others like sponges, algae and corals are already being tested for curing diseases like cancer and aids. Researchers from New York-based Memorial Sloan-Kettering Cancer Centre have developed a drug from a group of small marine organisms called bryozoans that could cure bone cancer when given in conjunction with chemotherapy.

According to experts, such marine resources could immensely help in developing drugs for diseases for which effective medicines are not available at present. Moreover, pathogens are developing resistance against the available drugs. Faced by such a quandary, mankind could use the oceans as a resource for obtaining disease-fighting agents. But experts caution that the health of oceans and their inhabitants must also be protected. According to Chatterji, it is vital to use these resources in a sustainable manner.