After cracking the whip on mining offenders, CEC is now going easy on them 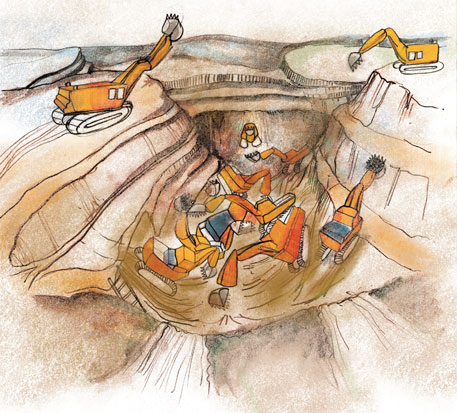 THE Central Empowered Committee (CEC) appointed by the Supreme Court to probe illegal mining in Karnataka contradicts itself. In its interim report presented in April 2011, CEC had proposed strict punishment for companies mining illegally. On this basis, the apex court banned mining in Bellary, Chitradurga and Tumkur last year. But within 10 months, CEC has shifted its ground. Its final report, presented on February 3, 2012, provides ample scope for mining. On April 22, the Supreme Court accepted CEC’s final report and lifted ban on 45 mines that it said were mining legally.

Based on the extent of illegal mining in the three districts, CEC has classified mines into categories A, B and C. All operational and non-operational mines where there is no illegality come under category A. The 45 mines now permitted to restart operations fall in this category.

The CEC recommends that these mines should be allowed to resume operations subject to conditions like mining plan, environmental clearance and consent to operate. After the ban on mining in Bellary, these 45 mines had remained closed, causing a loss to the exchequer. A CEC member attributes this delay to the probe and various surveys. “We had to ascertain the details of the kind and scale of illegality associated with mining in Bellary to pin the real offenders. Given the extent of illegalities, this took a lot of time,” the member says.

CEC does not propose cancellation of category B leases. It says reclamation and rehabilitation (R&R) plans should be implemented for such mines at the cost of the lessee. However, it allows these mines to resume operations if a monitoring committee set up for R&R plans certifies that the plan has been satisfactorily implemented.

Two lease-wise R&R plans have been developed by the Indian Council of Forest Research and Education (ICFRE) based on which the CEC has developed procedures to implement them. The council had done a macro-level environment impact assessment (EIA) of Bellary on behalf of the Karnataka government in August 2011 on the orders of the Supreme Court.

CEC’s final report is in stark contrast to its interim report, which recommended strict action against offenders, suspension of all mining operations and cancellation of illegal leases. It had proposed exemplary action against all guilty officials and marking of inter-state forest boundaries to prevent illegal mining on the Karnataka-Andhra Pradesh border. CEC had also recommended a fine amounting to five times the market value of illegally mined iron ore.

S R Hiremath of Samaj Parivartan Samudaya, the Dharwad-based non-profit which had filed the writ petition leading to the ban, is appalled. “CEC has departed from its goal of environmental conservation and outlined a model for restarting mining. The final report fails to act as a deterrent against such environmental degradation in future,” he adds.

Had CEC’s earlier proposal to fine companies mining illegally been implemented, the government would have recovered Rs 31,250 crore for the 25 million tonnes of iron ore stockpiled at various mines at the time of the ban. This is five times the market value of iron ore assuming that its market price is a moderate Rs 2,500 per tonne. The Supreme Court-appointed monitoring committee, which was permitted to sell the stockpiled illegal iron ore, e-auctioned it at this price. Till January this year, the monitoring committee had e-auctioned 10.97 million tonnes of iron ore worth Rs 2,693.87 crore through 18 bids. On April 13, the apex court allowed the e-auction route for the next two years for all iron ore that will now be mined in addition to the stockpile. This is to be overseen by the monitoring committee, comprising senior state officials—additional principal chief conservator of forests Dipak Sarmah, chief conservator of forests U V Singh and director mines and geology H R Srinivasa. 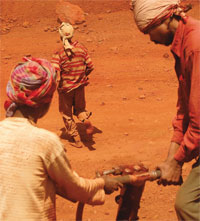 For category C, however, the total sale proceeds would be retained by the monitoring committee. The money generated by re-allotment of these mines will also remain with the committee. In effect then, instead of a whopping original amount of Rs 31,250 crore accruing as recovery, the figure has now shrunk to a paltry Rs 5,390 crore. This does not include the money to be generated by re-allotment of category C mines. The amount, interestingly, will go to a Special Purpose Vehicle (SPV) proposed by CEC. The SPV, to be chaired by the Karnataka Chief Secretary and comprising senior state government officials, is expected to ensure that all the money coming from e-auctions and allotment of category C mines is used for socio-economic development of the area, its people, conservation and protection of forests and, curiously, development of facilities to transport iron ore.

In its April 13 judgement, the Supreme Court ruled that mining companies in Bellary cannot extract more than 25 million tonnes of iron ore per year. The court also imposed a cap of five million tonnes of iron ore at mines in Chitradurga and Tumkur. This is in line with the ICFRE’s recommendations in its macro-EIA report, which the CEC has accepted.

“Bellary has iron ore reserves of one billion tonnes. The ceiling implies this will be exhausted in 40 years which is not even one generation. This clearly violates the concept of inter-generational equity,” says Hiremath.

Chandra Bhushan, deputy director of Delhi-based non-profit Centre for Science and Environment, presents an even worse scenario. “Given the present level of mining and the planned steel plant capacity of 60 million tonnes per annum (MTPA) in the district in addition to the existing 27 MTPA, it is likely that the ceiling will be relaxed in the future and iron ore reserves will not last even 20 years,” he says.

The ICFRE has already pointed out that due to sharp rise in the global demand, the Indian Bureau of Mines (IBM) revised the quantity of iron ore to be removed from Bellary—from 19.768 million tonnes to 82.9705 million tonnes. These revisions were based on the data provided by the lessees. A Union Ministry of Mines official explains, “The IBM can revise the mining plan and hence the quantity to be mined as per the Mineral Conservation and Development Rules. This is what happened in Bellary. But in 2010, the ministry directed IBM to allow only prospective revision of mining plans after consultation with the state government.” This ensures that authorities are kept well informed of such revisions in advance. CEC overlooked law-based issues like these that could prevent recurrence of illegal mining in the state.

Apex court’s April 13 order states that ore which becomes available after lifting up the ban in 45 mines should be used to meet the domestic requirement of steel plants.

However, the judgement also puts an additional clause for exports. “Exports should be permissible only in respect of the ore which steel plants and associated industries are not willing to purchase on or above the average price realised by the monitoring committee,” the order states. This will be the average price of iron ore during e-auction (see ‘Loot story’,).

In its macro-EIA, ICFRE noted “severe and significant damage to environment” in Bellary, particularly by small lessees. It also found violations of environment clearance conditions, Forest (Conservation) Act and mining plans. Even though the ICFRE report mentions these violations, they are not listed as the basis for classification of mines by CEC. It does not take environmental compliance parameters into account. The report adds that environmental safeguards were flouted out of “greed to mine greater areas and earn more profits” and, therefore, the defaulting lessees must pay up.

CEC has recommended that no new mining lease should be granted without the Supreme Court’s approval. “CEC has missed the big picture. It has focussed on the letter of the law and not its intent. It has ignored the real environmental problems of Bellary by allowing mining in all categories sooner or later. It does not realise that the assimilative capacity of the district has been drastically reduced and continuing mining at 25 MTPA without restoring the area will further degrade the environment,” adds Bhushan.