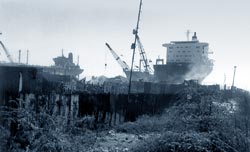 six people died recently in a fire at the Alang ship-breaking yard in Gujarat. The issue of workers' safety and the environmental implications of this highly polluting activity have come to the fore yet again after the mishap. The incident also assumes significance in the light of recent global developments that, unfortunately, are likely to boost ship-breaking in India.

It took fire-fighters more than 24 hours to douse the blaze after it broke out on February 22. The Gujarat Maritime Board (gmb) has been tight-lipped and may not disclose details until a probe is completed. The authorities were scheduled to commence their investigation on March 1, but it has been delayed for unknown reasons.

The owner of Yard 94, now in police custody, is believed to have started cutting the ship without obtaining a certificate from the gmb. The clearance is given only after all explosive materials have been removed from the vessel. "Within half an hour after they started breaking the ship, it caught fire," says Ramapati Kumar, ship-breaking campaigner with pressure group Greenpeace India. Kumar visited Alang after the fire broke out and spoke to workers and injured victims. "Cutting operations commenced without the oil in the ship being drained out. This is what caused the fire," he alleges.

Russian oil tanker Amina , which was involved in the accident, had reached Alang only two days before the fire. Earlier, it was also found that Alang witnessed four to five deaths per month due to the lack of proper facilities.

India, Bangladesh and China are the biggest markets for ship-breaking activities, with India leading the pack in 2002. Recent policy changes being contemplated by the us and European Union (eu) may lead to a surge in the number of ships entering these countries for recycling purposes.

A bill signed by us President George Bush in December 2002 calls for the exploration of the feasibility of exporting the rusting National Defense Reserve Fleet of 350-400 ships currently under the jurisdiction of the us Maritime Administration. The proposed legislation reverses a moratorium put in place by the Clinton Administration in view of human health and environmental concerns in ship-scrapping nations.

Meanwhile, the sinking of the oil tanker Prestige in Spanish waters in November 2002 led to the passage of a law in the eu in December. As per this, all single-hull tankers carrying heavy fuel have been banned from entering their waters. A blanket ban on single-hull vessels over 15 years old will come into force by 2010. Should this materialise in the eu, and subsequently at the International Maritime Organisation, more than 700 such ships are expected to enter the ship-breaking market.

The twin moves will certainly spur ship-breaking activity in India.