Should free trade include toxic dumping?

Many European nations have banned the free passage of toxic waste between borders, despite the common-market concept. 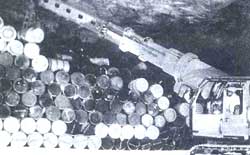 IN EUROPE, a ban on toxic waste movement between countries has led to a hot debate on free trade. Concerned by a legal ruling stating European Community (EC) legislation which bars governments from imposing prohibitions on trans-border passage of merchandise, many states have announced bans specifically relating to wastes. These states took advantage of a recent clarification by the European Court of Justice of its ruling in a Belgian case that waste is a "special type of commodity" and because environmental problems should preferably be rectified at source, bans may be imposed in principle on import of waste.

French environment minister Segolene Royal stated outright that "France refuses to be the dustbin of Europe," and his country became the first to ban the import of all, but specially authorised, waste. The decision has thrown the EC into a quandary as it threatened the "single market" concept. In July, the European Court of Justice ruled that the Wallonia region in Belgium -- which had banned import of toxic waste -- would have to allow waste imports from the rest of Europe. Wallonia's executive council had ordered the prohibition after a study found that dumping by Dutch and other firms near the town of Mellery had led to health disorders among its residents. Greenpeace activists said the court decision meant "Europeans have been deprived of their right to environmental self-defence."

Outside the EC, Lithuania enacted a law banning hazardous waste imports and allowing its people full access to information and decision-making on environmental issues. The Lithuanian law followed offers to export upto 100,000 tonnes of PCB-contaminated oil to Lithuania annually for 12 years for burning in thermo-electrical heating plants at just 100 Deutsche Marks per tonne. But a government official in Vilnius said, "We do not want to buy PCB or dioxin problems for future generations just to get some Deutsche Marks."

Welcoming these actions, Greenpeace EC toxics advisor Anita Fokkema commented, "With waste export and dumping scandals increasing and being discovered now weekly in places like Poland, Central America, Egypt, Turkey and Romania, it is now more important than ever that the EC's proposed legislation on the shipment of hazardous wastes ban all forms of hazardous waste exports to the Third World and Eastern Europe."

Some observers, however, noted that because of the economics of waste export, lucrative shipment of German waste to France would almost certainly resume on a regulated basis once arrangements are worked out. Germany, the biggest exporter of waste in Europe, routinely exports its waste to France for disposal. The crux of the problem is that it is cheaper for countries like Germany to dump trash in a landfill than recycle it.

However, with landfills becoming steadily privatised and with local environmental agencies taking over their regulation, the costs are sure to increase, making it all the more tempting to export waste rather than recycle or eliminate it. It is cheaper for countries like Germany to dump trash in a landfill than recycle it