Chemical taint spells doom for jaggery business in western UP 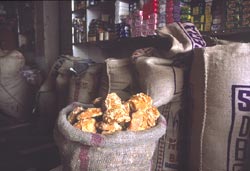 arun Kumar, a jaggery trader of Muzaffarnagar Gur Mandi in Uttar Pradesh (up), has fallen upon hard times. "During the past decade, the gur (jaggery) business has slumped by two-thirds," he laments. His brother, Roshan Lal, who is the secretary of the mandi union too feels the situation is hopeless: "The future of jaggery trade is bleak in up." What appears to have sounded the death-knell for the business in the state -- despite the Muzaffarnagar Gur Mandi being the largest in Asia -- is the alarming frequency with which chemical contaminants have been detected in jaggery.

Following complaints to state agriculture minister Hukum Singh about the indiscriminate use of chemicals in making gur, a survey of the jaggery-producing units was ordered. The deputy director of agriculture, Soraj Singh, inspected five such sites in Basera. His findings were startling: manufacturers were using sodium hydrosulphite, super phosphate, decolite, urea, soft stone powder and ammonium bicarbonate during gur production.

A few studies conducted by the up Council of Sugarcane Research (csr) and Cane Research Institute in Lucknow and Muzaffarnagar throw some light on the matter. They state that an overdose of chemicals in sugarcane farming and gur manufacturing has made the final product toxic.

"Jaggery manufacturers use 10 to 15 times more chemicals than the prescribed limits," reveals joint director, csr, M L Sharma, who surveyed around 600 villages. According to him, the traditional method of cleaning jaggery with organic agents has been replaced by the process involving chemical agents. Gur manufacturers are using large quantities of sodium hydrosulphate to clean sugarcane juice, observes Sharma. While csr stipulates 10 grammes of the chemical for 10 tonnes of juice, Sharma found out that the traders were using 50-100 grammes of the chemical. It may be noted that sodium hydrosulphate makes gur acidic. A P Agarwal, former director of Cane Research Institute, warns: "The heavy chemical content will take a silent toll on the people's health."


Significantly, a change in the market dynamics may have forced the industry to adopt desperate measures. Earlier, the manufacturers extracted jaggery during January and February. It is during this period that sugarcane matures. But a booming sugar market has resulted in farmers selling sugarcane to gur manufacturers only during September and October when it is not ripe. Sugar mills offer a high price (regulated by the state government) to the farmers for mature sugarcane. Most jaggery producing units have to shell out anything between Rs 80 and Rs 95 for procuring sugarcane directly from farmers. The rate may fluctuate due to variations in sugar content, but it is largely dictated by the government's fixed procurement price of Rs 95 per 10 tonnes.

Usually, sugarcane contains only 12-13 per cent of sugar and 60-65 per cent of moisture at the stage during which gur manufacturers buy it. Farmers use excessive urea to get quick yields. "Too much urea delays maturity of sugarcane and raises the water content of the crop," says Sharma. Jaggery producers utilise chemicals liberally to hasten the ripening process. On their part, traders deny that such substances are used to get fast results. "We use chemicals because buyers in Gujarat and Rajasthan want almost white jaggery," claims a jaggery producer.