Studies show modern kitchen is not as safe as believed. Use of exhausts, effective ventilation can reduce household pollution 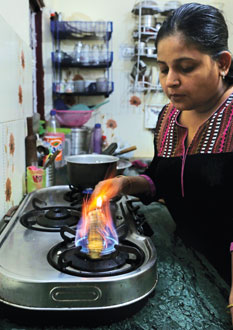 Cooking takes place every day in homes across the world. Whether it is done on traditional mud stoves or on sophisticated burners, gases released during the process endanger the health and lives of people in the house. Experts say it is a misconception that kitchen exhaust and ventilation are not a necessity.

Harmful gases and chemicals are released during combustion of both kinds of fuel—solid (wood, coal, kerosene) and gas (natural, bio, LPG). The list of pollutants includes nitrogen dioxide, carbon monoxide, particulate matter and formaldehyde. According to a study published in Environmental Health Perspective in August 2014, around 3 billion people in the world face household air pollution. Though most of these live in poor countries, the problem is not limited to poor countries. The study estimated that 500,000 to 600,000 people with low incomes in the US are exposed to indoor pollution because their primary source of heating is solid fuel. As per the World Health Organization estimates, 4.3 million people across the world die every year due to illnesses attributable to household air pollution. In comparison, outdoor air pollution kills 3.7 million a year.

A study conducted by researchers from Lawrence Berkeley National Laboratory, California, found that the use of natural gas for cooking generates substantial quantities of the pollutants. The research showed that the level of pollutants in homes using natural gas burners exceeds safe limits set by the US Environmental Protection Agency (EPA). The study was published in the journal Environmental Health Perspectives on November 5, 2013.

The problems associated with gas fuels are not new. Another study, published in February 1996 in Lancet, found that exposure to burning gas stoves increases the risk of respiratory problems such as wheezing, shortness of breath and asthma attacks. Harmful effects associated with gas burners were also recognised by the Canada government which released a Clean Air Guide in 1993. The guide recognised gas water heaters, furnaces, unvented space heaters and cooking stoves as major causes of chemical contamination in homes. The agency recommended the replacement of gas appliances with electrical ones.

Despite their drawbacks, gas stoves are still better than solid fuel stoves, says Kirk R Smith, professor of Global Environmental Health at the University of California, Berkeley. According to him, using gas may result in a slight overshoot of US standards for a few minor pollutants, but it is much better in comparison to the extensive particulate matter produced by solid fuel in India. Smith also says that in some cases, burning of gas has been found to aggravate respiratory problems in children, but it is not clear whether the effects are due to the emissions from the burning of gas or the food itself. Gas is a clean fuel, he says.

“Nothing is perfectly without risk. For those using solid fuels, gas would be immensely better,” says Smith, and adds, “only induction cooking produces no pollution at all in the house.”

However, induction cooking too is not completely harmless because fumes released from food during cooking can harm health. Frying and grilling of food releases acrolein which has been associated with cancer in some studies. Acrolein is also present in cooked foods in trace quantities. It is formed from carbohydrates, vegetable oil, animal fats and amino acids during cooking of food. A study published in the Journal of Exposure Science and Environmental Epidemiology in 2013 shows that exposure to fumes released from cooking oil could lead to DNA damage and cancer. But there is no conclusive evidence to link acrolein with cancer.

“Fumes released in cooking processes such as seasoning with mustard, curry leaves, and chilly, can act as respiratory irritants in some individuals,” says Ramakrishna Goud, additional professor at the department of community health, St John’s Medical Research Institute in Bengaluru.

According to a study conducted by the Lawrence Berkeley National Laboratory, the use of exhaust hoods or electronic kitchen chimneys can considerably reduce toxic chemicals released during cooking.

Brett C Singer, co-author of the study, says, “Our key finding is that even with a clean fuel source of natural gas used for cooking, it is important to ventilate when using indoor combustion. As homes become tighter, which improves comfort and reduces energy needs for heating and cooling, it is even more important to provide ventilation when cooking and using combustion sources. Otherwise, indoor air quality problems can occur.” 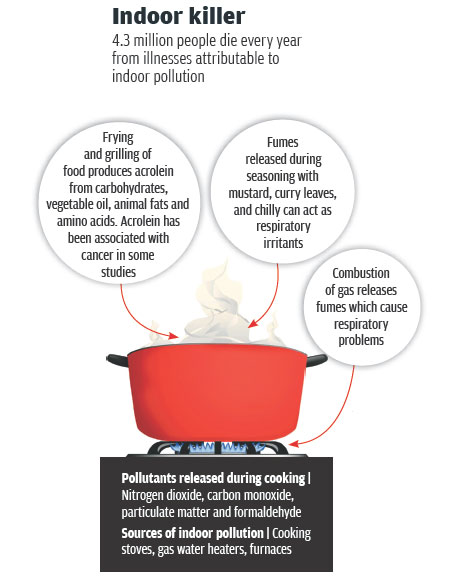 Singer and his team studied the efficacy of household cooking exhaust hoods in capturing and venting out air pollutants generated by gas burners due to combustion of fuels. The capture efficiency of the seven devices they tested varied from less than 15 per cent to more than 98 per cent. The study found that all exhaust hoods do a better job of capturing pollutants generated by the two back-burners of a four burner stove than its front burners. The study was published in Environmental Science and Technology in 2012. The researchers suggested that improvements in design, use of grease traps and better motors can make kitchen chimneys more effective.

Singer and his team followed this research with another one to assess the ability of exhaust hoods in capturing pollutants generated by food items during cooking. The team found that the capture efficiency of exhaust hoods in venting out fumes generated by food items kept at the back-burners was not much different from their efficiency in venting out fumes generated by gas fuel combustion from back-burners, calculated in the previous study. However, the figures were different for front burners. The study says that capture efficiencies (CE) for “combustion pollutants are not predictive of CEs for cooking-generated particles under all conditions”. The findings were published online in the journal Indoor Air on May 24, 2014. Singer stresses, “Solution to avoiding pollution from gas burners is to effectively ventilate.”

In a report published in January 2014 by the Berkeley Lab, Singer and his team said it was a common misconception that kitchen exhaust is not necessary during cooking. The team suggested measures to counter kitchen contaminants. These include raising public awareness on the need of kitchen ventilation and setting performance targets to ensure development of high quality products.

Household cooking with solid fuels contributes to ambient PM2.5 air pollution and the burden of disease

A method to estimate the chronic health impact of air pollutants in U.S. residences