The orangutan is threatened by poaching and habitat destruction 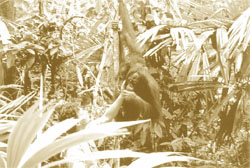 the orangutan could go extinct within a decade unless illegal logging in the habitat and poaching is controlled . These are the findings of a research conducted by the Wildlife Conservation Society (wcs) based in the us. The study has documented the tremendous decline in orangutan population throughout its range. In the Leuser ecosystem in northern Sumatra, Indonesia, which supported 12,000 orangutans in 1993 -- the largest orangutan population in the world -- nearly half the simian population has vanished. In 1998 and 1999, losses have occurred at the rate of about 1,000 animals per year.

"The alarming decline in the orangutan population in Leuser means that the world's largest orangutan population will be extinct in a decade unless the current trend is reversed," says the study's lead author, Carel Van Schaik, research associate from Duke University, usa, working with the wcs. He has studied wild orangutans for more than 20 years.

Ironically, the Leuser ecosystem includes Sumatra's largest protected area, Leuser National Park, where the Indonesian military and police have allowed rampant logging says the study. Van Schaik found that orangutan densities decreased by more than 60 per cent in areas that have been selectively logged. The decrease in the number of fruit bearing and canopy trees which the orangutan use for travel are the two chief reasons for the dwindling orangutan population says a news report dated March 5, 2001 on www.sciencenews.com.

Selective cutting has been inevitably followed by rampant illegal logging in Leuser and other areas. This has caused density of orangutan populations to drop by as much as 90 per cent. Many areas have subsequently turned into massive agricultural estates and, therefore, not regenerated into forest. "Unfortunately, selective logging is rarely followed by the 30-40 year rest period prescribed by law and required for forest regeneration. Instead, timber removal continues illegally, until just about all of the timber-sized trees of commercially valuable species are gone," says Van Schaik.

The situation in Borneo, the only other island where orangutans are found, is no better. About one third of Borneo's orangutans died during the forest fires that swept through the area in 1997-98. And illegal logging continues to affect the region.

"Documenting the decline in orangutan numbers is both depressing and a call to action. The us government has provided us $1.5 million in emergency aid for orangutan conservation for the fiscal year 2001-2002 under the us Great Apes Conservation Act of 2000, which will provide financial assistance in years to come. But tough changes in natural resource management and protection of remaining habitat are equally as critical to ensuring a future for the orangutan," says Josh Ginsberg, director, Asia Programs, at the wcs .

Orangutans in Leuser differ from their Bornean counterparts in having higher population densities and a tendency towards more social behavior. Van Schaik has documented use of at least two kinds of feeding tools used by the primate to extract honey from tree holes and seeds from a woody fruit protected by stinging hairs. The geographical distribution of the tool use implies that it is handed down through generations, similar to what occurs among certain chimpanzee populations. Conservation efforts should therefore strive to preserve populations in both Sumatra and Borneo or the two diverse populations will be lost.

"The study of wild orangutans provides us with a unique window on the conditions that favoured origins of human culture. Losing the wild orangutan would forever close that window. If we act now, we can still save enough populations from oblivion, but we cannot afford to waste any time," says Van Schaik.