Study says forest loss in Indonesia worse than Brazil; most of the deforestation is caused by forest fires that result in transboundary haze

In its effort to curb transboundary haze, the government of Singapore has made more stringent its ambitious legislation that aims to take legal action against both local and foreign companies that cause air pollution.

The toxic haze is caused as forest fires rage across Indonesia to make way for plantations, for which palm oil and paper companies have been blamed. The haze then drifts into Singapore and other South-East Asian countries. Last year, pollution levels in Singapore reached record levels because of transboundary haze.

The Transboundary Haze Pollution Bill, introduced in Parliament following a month-long public consultation, slaps a fine of up to US $2 million on erring firms. This is seven times what the Bill had suggested initially when posted for public consultation early this year.

Errant firms will pay a fine of up to US $100,000 for every day the haze occurs in Singapore. The Bill also takes the duration of the haze into account. For example, if the haze persists at an unhealthy level and evidence shows that it is caused by three days of burning, culprits can be fined up to US $300,000. Should the foreign-based director of the errant company be in Singapore, for example, the court can require him to remain in the country to give evidence or more information.

Singapore environment minister Vivian Balakrishnan says the Bill alone cannot tackle the problem. Proving which companies are responsible for the yearly problem would require collaboration across all the South-East Asian Nations (ASEAN). “This is an ASEAN problem. We need effective collaboration, cooperation between governments. We need to share information, we need to share results of investigations,” he says.

In 2002, all ASEAN nations, except Indonesia, signed a legally binding environmental agreement on transboundary haze. In October last year, Indonesian president Susilo Bambang Yudhoyono promised that his country would ratify the treaty soon with Parliament passing a law banning palm oil plantation owners from burning forests, but he is yet to do so.

Experts say that failure in Jakarta to act on the problem, combined with dry conditions of a likely El Niño, means this year’s haze could be worse than in 2013.

Deforestation speeding up in Indonesia 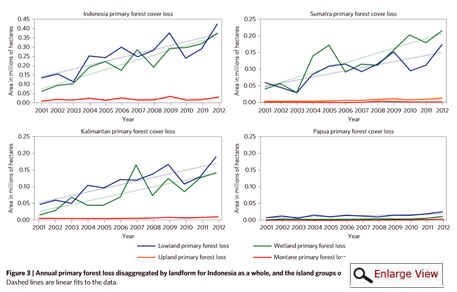 Despite a moratorium on new forest clearance in 2011, deforestation is increasing in Indonesia by an average of 47,600 hectares (ha) every year, according to researchers from University of Maryland and the World Resource Institute in the US who mapped the primary forests, including intact and degraded, in Indonesia between 2000 and 2012.

In fact, in 2012, which coincided with the moratorium period, witnessed the highest rate of forest cover loss. That year, Indonesia cleared around 0.84 million ha of primary forest, compared to 0.46 million ha of forest loss in Brazil, known for high rate of deforestation. Around 40 per cent of the losses occurred within land where clearing is restricted or prohibited, the study found.

“Easy access to lowland forest has made primary forests a target for logging and the subsequent conversion to higher value land uses. Wetland forests in Indonesia have historically remained largely intact. However, during the past two decades the conversion of wetland forests, including peat lands, to agro-industrial land uses has increased,” notes the study, published in Nature Climate Change on June 29. The increasing loss of forests within limited production areas on lowlands could indicate a hanging management regime focused on greater conversion as other forest lands are exhausted within this land form, say the researchers.

They further add that the continued deforestation casts doubt on whether the moratorium, which was extended for a further two years in 2013, is the most effective way to manage clearing and logging.

Oil palm is the main source of Indonesia’s economy.