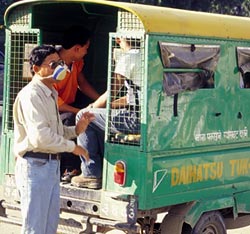 The first ever review of scientific studies on the health effects of outdoor air pollution in Asian cities underscores the fact that the impact of the scourge is as lethal in this part of the world as in Europe and the us. The assessment was done by the Boston (us)-based research body, Health Effects Institute (hei), and released recently in New Delhi.

Entitled Health Effects of Outdoor Air Pollution in Developing Countries of Asia: A Literature Review, the study is a part of the Public Health and Air Pollution in Asia Program (papa) that was undertaken by hei in partnership with the Clean Air Initiative for Asian Cities (cai Asia). The latter is a network of air quality regulators, development agencies, non-governmental organisations, industry and cities in Asia. papa seeks to inform regional policymakers about the state of the science concerning air pollution and health in major cities of the continent.

hei president Daniel Greenbaum observes: "This assessment is the first systematic identification of all peer-reviewed Asian studies on the effects of air pollution on health. It found that a considerable body of science currently exists across Asia (on the subject)."

In assessing existing evidence on the health toll of air pollution in Asian cities, the report has found that an increase in respirable suspended particulate matter (pm10) by just 10 microgrammes per cubic metre leads to a 0.5 per cent rise in mortality. Further, an increase in the levels of nitrogen dioxide pushes up hospital admissions with regard to respiratory disorders by 1 per cent. Given the high levels of air pollution in many Asian cities (exceeding 100 microgrammes per cubic metre), the public health impact of this trend could be substantial, warns the study.

hei scientists were surprised by the similarities between the results thrown up by Asian research and those from studies conducted in Europe and the us. They had good reasons to expect, states the report, that the effects of air pollution would be influenced by the difference in age profile, health status and lifestyle between Asian and Western populations, as also by the mixture and toxicity of pollutants. However, studies reviewed so far in Asia do not show much variation from those conducted elsewhere. hei vice-president Robert O'Keefe explains: "The small number of (Asian) cities considered for review limited the comparisons...but the estimated effects are similar to those found in extensive studies conducted in Western countries."

The review took into consideration over 138 studies published between 1980 and 2003 that assessed the extent of illness and deaths in China, India, Indonesia, Japan, Malaysia, Thailand, Singapore and South Korea. Of these, only 28 time series studies qualified for further systematic analysis, based on their ability to meet specified criteria. These included meeting a minimum data collection period of one year, use of statistical approaches to control the influence of non-air pollution factors on the study outcome and allowing coherent comparison of studies across cities.

Out of the 15 Indian studies considered for review -- six from Mumbai, five from Delhi and four from other cities -- only one could meet the benchmarks for inclusion in the analysis. This, too, was conducted by a World Bank expert, Maureen Cropper, in 1997. Although Indian studies have generated important local evidence, they are still limited in scope and method. J N Pande, a papa technical advisory committee member, says: "The response from India was inadequate. (The country) has done some fragmented studies but not of the desired scientific quality. (All the same) these fragmented evidences have influenced policymakers in India." While officials of India's Union ministry of environment and forests were aware of the papa study, they weren't willing to comment on the larger message of the exercise: the need for policy support to improve the quality of studies in the country. Nor did they want to suggest how the authorities could step in to enhance scientific capability.

The parameters set by hei spawned a peculiar problem. The majority of the Asian studies that could fulfil the criteria were concentrated in the more developed regions of East Asia. The maximum number of reports is from South Korea (11), followed by China and Hong Kong (six each). The review also includes one study each from Taiwan, Singapore, Thailand and Japan, apart from India.

What the study cannot adequately capture at this stage, therefore, is the influence of several unique features such as very high levels of air pollution in South Asia and the susceptibility of poorer people to the problem. Many of these issues will be addressed in new studies that have recently been initiated in Thailand, Hong Kong and China with the help of local investigators under the papa programme. Similar studies in India (one in Chennai) and Southeast Asia are slated to begin in 2005.