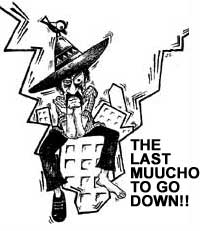 mexico City is going down. Literally. The city, in the last 100 years, has sunk more than nine metres. It is still sinking at the rate of 46 to 60 cm annually. This is happening because, as more and more water is being pumped out of the aquifer beneath the city, the ground water level is going down rapidly, causing the city to sink.

"The sinking of the soil in Mexico City is one of the biggest engineering problems any city has faced anywhere", says Ismael Herrera Revilla, a professor of mathematics at the National Autonomous University. Revilla led a binational scientific panel in a five-year study of the Mexico City's water crisis.

An ordinary water pipe near the famous Monument to the Revolution is being accused of causing the city to sink. The pipe was injected into the ground in 1934 when the Monument was built. But now, it stands about eight metres high. This shows how much the city has sunk since 1934. In early 20th century, the annual rate of sinking was about five cm. It reached about 48 cm a year during the mid-20th century. Another evidence of the city's sinking is the subway system. Horizontal when first constructed in the mid-1960s, the tracks now resemble a roller coaster ride.

The sinking process, not being uniform, has caused widespread damage to buildings and other structures, particularly in the colonial-era city centre. Alarmed by the damages, estimated in millions of us dollars, the city has now stopped pumping water from the city-centre area and is getting the water supplies from wells at the periphery. Though in the city-centre area the rate of sinking has come down to about 2.54 cm per year, it is still about 46 to 60 cm a year in the suburbs.

Worst affected are the underground sewer lines, subway tunnels, and potable-water pipes. The government has started work on a us $870-million sewage disposal project, as sewage no longer flows by gravity into the Grand Drainage Canal, the main sewer outlet for over a century. High capacity pumping stations have been set up to elevate the sewage to the level of the existing sewage disposal canal as sewer lines have been ruptured by collapsing sub-soil. As sinking rup-tures underground water pipes, fresh water is lost to sewers causing more shortage of it.