Landslide leads to lake formation on the Ramganga, which may burst any time 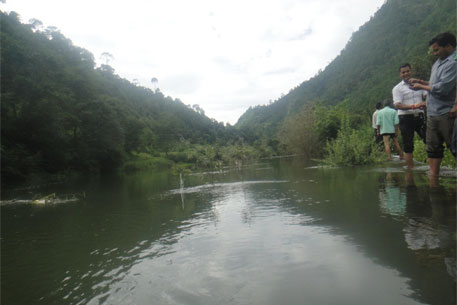 An active landslide from the hill where Sanera and Jingaur villages are located has blocked the water of Ramganga river, leading to formation of a lake.

The landslide started over a week ago following heavy rainfall in the region. A huge amount of debris slid down the mountain slopes, blocking the river that had already been in spate. Several hectares of farmland have gone under water because of the lake formation.

The residents, who have already lost their livelihood and have been cut off from major towns after disaster struck the state this June, are now on the verge of losing whatever little is left with them. They fear if the volume of water in the lake rises further and it bursts, it will cause damage to several villages downstream.

The threat is maximum to the villages of Agarchatti, Mehalchauri and Maithan that suffered huge damages in June and its residents are now anxious that the force of water released from the lake would loosen the rocks and aggravate the erosion that the river is causing everyday because of shift in its course.

“We lost a house in the last disaster. I saw its pieces floating away in the flood water. I can’t compromise with the safety of my family, and so we decided to go to Karnaprayag and stay there with my cousin's family,” says Balbir Negi, a resident of Mehalchauri. Along with Negi, several other families have left their homes to move to a safer area.

Negi says that because of heavy rains, the volume of water in the lake is increasing rapidly. Not only has it inundated fields on the other side, it is also weakening the side of the hill that is already denuded. “If this side starts eroding, the road connecting Chulkutiya would be gone soon,” he says.

The Ramganga river has now spread 20 metre into the villages. The lake is approximately 400m in length, 10m deep and 50m wide. Negi says when a group of villages informed the district administration the sub divisional magistrate visited the spot with some revenue officers. They came to know that the district administration has sent a detailed report to the state government. 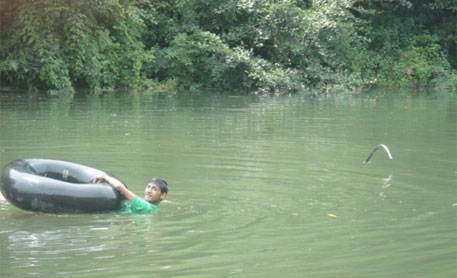 District magistrate of Chamoli, SA Murugan, says the administration knows about the formation of the lake and admitted it is indeed a threat to the villages downstream. There has been a site inspection and preliminary steps have been taken to avoid major catastrophe, he says. “We have taken a temporary measure to let the water in the lake out in controlled manner. Concrete steps would be taken to ensure the safety of the people and their homes in consultation with geologists,” he says, adding that they are still waiting for a geologist as he is unable to reach there due to road collapse at several points.