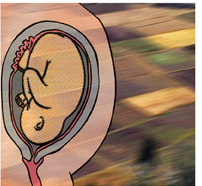 An international consortium of scientists recently emphasised on the irreversible harm that toxic chemicals can cause to foetuses and infants. The consensus was reached at the International Conference on Foetal Programming and Developmental Toxicity held in May at the north Atlantic Faroe Islands. Over 200 experts came out with the 'Faroes Statement', which warns of the debilitating effect of chemicals on a foetus' future growth and development and, in certain cases, also on its progeny. The meet was sponsored by the who, the European Environment Agency, the us National Institutes of Health and the Centers for Disease Control and Prevention.
Paracelsus, the 13th century Swiss physician and father of toxicology, had said, "the dose makes the poison". But the Faroes Statement emphasises that "the timing makes the poison".Biologists, toxicologists, epidemiologists, nutritionists and paediatricians came together to back this new paradigm in toxicology. It asks for regulations to check commercial use of such chemicals, 80 per cent of which, they say, go untested.

For the first time, researchers focussed on human data to present 'solid evidence' on how chemicals such as lead, methyl mercury, arsenic and organophosphate pesticides (see box Lethal doses) were affecting early developmental patterns, infant health and spilling over to adult lives. "There is fresh evidence to indicate a direct link between exposure to certain chemicals and early development of human beings. Governments can't wait any more," says Philip Landrigan, one of the lead members of the conference.
A foetus or an infant is far more susceptible to environmental hazards. Scientists found congenital malformations and other adverse outcomes when mothers were exposed to toxic chemicals, even in subtle amounts, during or prior to pregnancy. Such toxic exposure before and after birth could lead to disabilities and abnormalities in energy metabolism, endocrine functions and organ development. "The physiological mechanism of energy and nutrient metabolism is highly susceptible to toxic effects of environmental chemicals. Exposure to chemicals during or after birth can affect gene expression through what is known as dna methylation or chromatin remodelling. This predisposes the infant to diseases in adolescence and adult life and may even affect successive generations," says Landrigan.

The meet advised that studies on etiology of human diseases need to focus on early development factors that determine organ functions and disease risks. It called for cross-disciplinary links among scientists and with policy makers to study chemicals risks on humans.
S Saiyed, consultant with who and former director of Ahmedabad-based National Institute of Occupational Health, says screening of such chemicals is crucial. "Around 50 million women work in the fields in India. Of them, around 10 million are exposed to harmful chemicals and pesticides during pregnancies," says Saiyed. "We have no figures on chemical-induced abortions, nor on the combined effect of chemicals," he adds. Toxicology expert Aruna Diwan, consultant with the Indian Council for Medical Research, says the dose-response dictum could not be nullified. "But the timing-response theory can help determine the overall effect of any chemical." She adds that the long-term effects of chemicals are yet to be studied. A Union ministry of environment and forests' spokesperson said India lacked strict regulations, but a global protocol in this regard would be viewed seriously.