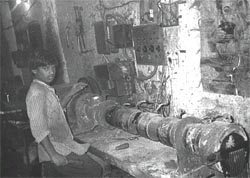 the Union government has once again shown how indifferent it is towards the environment. A number of measures to benefit small-scale industries ( ssi s) were recently announced by prime minister Atal Bihari Vajpayee. But what was conspicuously missing, though, were policies to curb environmental threats from small manufacturing units or the possible ways of reducing their adverse effects. ssi s are responsible for an estimated 65 per cent of the total industrial pollution load.

Speaking at a conference held in New Delhi, Vajpayee recently announced a series of measures to strengthen ssi s, including raising the limits for composite loans from Rs 10 lakh to Rs 25 lakh. Industry-related service and business enterprises with a maximum investment of Rs10 lakh will now qualify for priority lending. A capital subsidy of 12 per cent for investment in technology can also be availed. The new measures also entail raising exemption limit for the ssi' s from Rs 50 lakh to Rs one crore.

Prior to the introduction of the new measures there had been talks of raising the foreign direct investment in the ssi sector from 24 per cent to 49 per cent. This could have led to technology upgradation and adoption of eco-friendly methods of production. But the government has again shied away from promoting this.

Policies to improve environment should have been there in the new measures, say experts. They could have been linked to capital subsidies. "Tax exemptions should be given to those who are willing to adopt cleaner technologies. Effluent treatment plants, for instance, are not the only answer to the pollution problem. If nothing is done soon, the new measures will only add to the pollution," said Ravi Agarwal of Shrishti, a Delhi-based non-governmental organisation ( ngo ). He feels that the latest measures are a failure on the part of ngo s and individuals working in the field of environment.

Most of the ssi units do not adhere to pollution control norms. They usually shy away from installing effluent treatment plants as they are economically unviable due to the small scale of operation.

But ssi s are also at the receiving end of pollution control board authorities. Corruption is rampant to keep 'their mouth shut'. In the recent conference, too, Vajpayee acknowledged the problem. "The government is aware of the harassment that ssi 's units have to face because of frequent inspections by multiple agencies. We will set up a group to recommend, within three months, ways to streamline inspections. These would include abolition of laws and regulations that have become redundant," he stated . However, Agarwal feels that the pollution control boards, which already finds it difficult to tackle with the pollution problem caused by ssi 's units, will certainly feel elated by such measures. Although reduction in the number of inspections is welcome, it raises concern regarding supervising these highly polluting industries,which are scattered, he says.

ssi s contribute half of India's industrial output and nearly 38 per cent of its exports. However, only a fraction of the three million ssi units adhere to environmental norms. Two major ssi industries which often flout norms are the textile manufacturing and electroplating industries. They pose serious environment problems. Even while introducing the Environment Protection Act in 1986, policymakers failed to formulate policies which would curb the pollution problem caused by these units. ( Down To Earth , Vol 6, No 21).

In the past, several products from the ssi sector have been banned by various foreign countries on environmental grounds. In the early 1990s, Germany banned Indian leather as it contained pentachlorophenol, a carcinogen used as an anti-fungal agent in the finishing process.