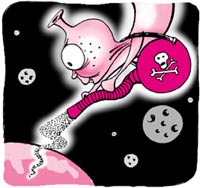 the hills were alive with the sound of music, with the songs they have sung for a thousand years. The teeny-weeny creature was gazing from far above. "The gates were open and the hills were beckoning...I could not help myself." In a jiffy he tumbled down, and then turned our world upside down.

Yes, if Indian and British scientists are to be believed, the Severe Acute Respiratory Syndrome (sars) is a result of the 'showering from above.' They say the virus got dropped from space -- it entered the atmosphere east of the Himalayas, where the stratosphere is the thinnest. Guided by the winds, it landed up in southern China. The scientists -- Jayant V Narlikar from the Inter University Centre for Astronomy and Astrophysics in India, Milton Wainwright from the Sheffield University of the uk and Chandra Wickramasinghe of Cardiff University of the uk -- have proposed their theory in a letter to The Lancet. Narlikar says further research is required to confirm the unusual hypothesis.

Their premise comes from experiments carried out in January 2001, in which a tethered, sterile balloon collected samples of a few microorganisms from some 41,000 metres above the Earth's surface -- an area devoid of life. "Translated for the globe, it means a tonne of bacterial material falling on the Earth daily. Some of the microbes may prove to be bacteria or viruses that are dangerous for humans," the trio contends.

The letter states that the great flu pandemic of 1918-19, which killed tens of millions of people, may be another example of a disease sown from space. "Epidemiologists have always been intrigued about how the disease pathogen spread so quickly and infiltrated remote communities at a time when there was no jet travel, and also how it disappeared so abruptly. Now we know better," says Narlikar.

Another basis of their idea is the minority theory of Panspermia, according to which microorganisms hitchhiked on passing comets to seed life on the Earth. Therefore, our teeny-weeny creature ought to watch out for a comet to get a ride back home.