How to improve yield in organic farming 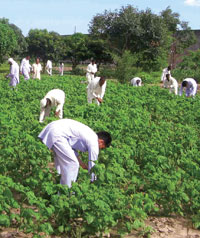 IN A world obsessed with yields, questions have always been raised about the sustainability of organic farming. Now, a comprehensive analysis of the existing studies by scientists from the US and Canada has shown that the yield gap between organic and conventional farming can be narrowed with careful selection of crop type, growing conditions and management techniques.

Verena Seufert and her colleagues analysed 66 published papers comparing organic and conventional yields for 34 crop species, including wheat, tomatoes and soybeans. They found yield from organic farming could result in low yield; in case of cereals it was 26 per cent lower than conventional, and vegetables lagged behind by 33 per cent. But some crop yields did not suffer much. Organic fruits like strawberries and apples showed only three per cent drop in yield and oilseed crops 11 per cent.

The team suggests this happens because legumes and perennials are not nitrogen-dependent. “Legumes do not depend on external nitrogen, whereas perennials, due to their longer growing period and extensive root systems, achieve a better synchrony between nutrient demands and slow release of nitrogen from organic matter,” says Seufert.

The team also found that organic crops perform better in weak-acidic to weak-alkaline soils—soils with pH between 5.5 and 8.0. This happens because of the difficulty in managing phosphorus in organic systems. Under strong alkaline and acidic conditions, phosphorus is less readily available to plants as it forms insoluble phosphates. They also noted that the organic yields are low in the first years and gradually increase, owing to improvements in soil fertility and management skills. They found organic performance improved in studies that lasted more than two seasons or were conducted on plots that had been under organic farming for three years. The study was published in Nature on April 25.

“The yields can be improved if we use best management practices. These include crop rotation, as nutrient and pest management in organic systems depend heavily on crop rotation as well as a high crop diversity and nitrogen,” she says. This can be achieved by adding sufficient animal manure or by using legume-based or perennial-based cropping systems,” Seufert concludes.

“If we are able to estimate the ecosystem services and improved quality of organic foods in monetary terms, it will definitely outweigh conventional ones,” says Dinesh Trivedi, senior scientist at Indian Agricultural Research Institute.